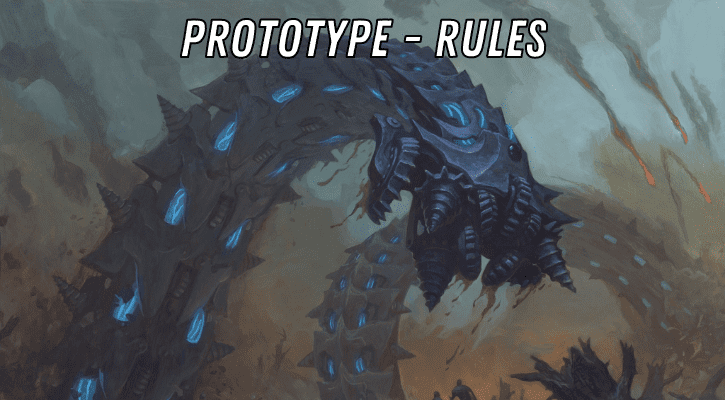 Prototype is a new MTG ability word introduced with The Brothers’ War. In this article, we’ll talk about everything you need to know about it, including:

How Does Prototype Work?

Prototype is a new ability, which can only appear on artifact creature cards. You can cast a creature with prototype for its regular cost or for its prototype cost.

In both cases, the creature will have the same abilities, but its size (power and toughness) will be different. Prototype cost is usually cheaper and gives you a smaller creature. The regular cost is typically higher, but you get a bigger creature.

Essentially, a card with prototype gives you two options. A smaller, cheaper creature, or a bigger, and more expensive one.

Let’s take a look at an example. Rust Goliath is a simple Green common with prototype ability.

You can cast it for its regular cost (top right corner of the card). This means that you have to pay 10 mana, and you get a 10/10 with reach and trample.

Of course, ten mana is a lot, so you might rather use the prototype cost (top right corner of the text box). In that case, you pay five mana (two of which must be Green), and you get a Green 3/5, which still has reach and trample.

Cards always have the same abilities, although their power level might vary anyway, as you can see from our next example, Phyrexian Fleshgorger.

It will have the same abilities, whether it’s a 3/3 or a 7/5. However, the ward ability, depends on its power. If your opponent wants to deal with it, they’ll have to pay 3 life, or 7, depending on its size.

There are other cards with prototype (usually rare or mythic rare) with abilities that scale with their power in toughness, so keep that in mind, when you’re evaluating these cards.

Here are some frequently asked question that players have about the MTG prototype mechanic. If you still won’t find the answer to your question, leave a comment below, and we’ll get back to you as soon as we can.

How does prototype work?

Prototype is basically an alternate casting cost, usually lower than the regular cost. If you cast a card for its prototype cost, it’ll have the same abilities, but its size will be smaller.

Can you upgrade the creature with prototype once it’s on the battlefield?

No you can’t. Once the creature is played, that’s its size, unless it leaves the battlefield.

What power and toughness does a creature with prototype have in your hand or graveyard?

The creature has its regular power and toughness in all zones, except if you cast it for its prototype cost.

Can you counter a creature that was cost for its prototype cost?

What happens if I blink a creature with prototype?

It comes back with its regular power and toughness. (The one in the bottom right corner of the card, which is usually bigger.)

What’s the mana value of a creature with prototype?

What’s the color of a creature with prototype?

The flavor of prototype is pretty straightforward. As Wizards of the Coast stated, it represents machines of war in two different stages of development. You have the smaller prototype version of the machine, and the one that’s bigger, but has the same functionality.

Let’s take a look at some interesting interactions with prototype cards.

An interesting interaction happens with prototype is with cards that blink creatures. If you’re unfamiliar with the term, to blink a creature means to exile it, then return it to the battlefield.

So, if you’d play a card for its prototype cost, and afterwards target it with something like Acrobatic Maneuver or Ephemerate, you’d get it back with the regular power and toughness. This way you could “cheat” a very big creature into play earlier than expected.

Another similar trick is with cards that return creatures from the graveyard to the battlefield. With reanimation strategies, you need ways to get a big creature into your graveyard. Usually, you do so with self-mill, or cards that let you discard.

With prototype, you don’t have to jump through many hoops. Just play your creature for its prototype cost, and trade it in combat or for an opponent’s removal spell. Once it dies, you can return it from your graveyard with cards like Zombify. (Or The Cruelty of Gix‘s last chapter, if you’re playing Standard.)

The returned card will have the regular power and toughness, so the bigger one of the two, which is exactly what you want.

In draft prototype will be incredibly useful, since they are very flexible, and such cards always end up over-performing. The fact that you get two options means that the card gets much better than any of those options of their own.

If you end up with a lot of prototype cards in your deck, that might encourage you to play an extra land, as you’ll have powerful stuff to do with your mana in the late game.

That’s all about prototype rule. You should now know how it works, so you’ll be able to use it to your advantage. If you want to get your hands on some cards with prototype ability, you can get yourself a Brothers’ War Set booster box.

If you want to explore more interesting things about The Brothers’ War, check out the following articles:

Until next time, have fun and may you win a lot of games with your favorite prototype cards!