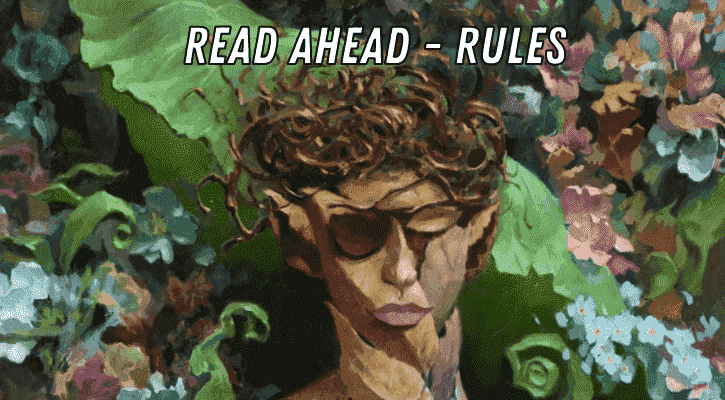 Read ahead is a new MTG ability introduced with Dominaria United. In this article, we’ll answer all questions and rules concerns you might have, such as:

We better get right to it!

How Does Read Ahead Work?

Read ahead is an ability, that can only appear on Saga cards. When you play a Saga with Read ahead, you decide with how many Lore counters it enters with. So essentially, you decide on which chapter it’ll start.

Any chapter that you skip over won’t trigger. Otherwise, the Saga will work pretty much the same as any other Saga would. If you don’t know how Sagas work, you can find MTG Saga rules here.

Here’s The World Spell, a mythic saga with Read ahead.

You pay seven mana, and thanks to Read ahead, you have a decision to make. You can put:

The third effect is clearly the most powerful one. If you have two good expensive permanents to put into play, you’ll probably put three Lore counters on The World Spell, and you’ll get that effect immediately.

However, if you don’t have something good to cheat into the play, then you’ll use one or two Lore counters, depending on how much time you think you’ll have.

All in all, what Read ahead does is that it makes the Saga more flexible.

The Phasing of Zhalfir is another Saga with Read Ahead.

As you can see, it has similar synergy between the chapters, as the previous one. If you need to, you can go right to chapter three and replace all creatures with 2/2 Phyrexians.

However, if you prefer, you can first save one or two of your creatures from that fate, by going to one of the first two chapters.

In this section, we’ll try to answer some questions that you might have about the Read ahead ability. As always, if you won’t find what you’re looking for – leave a comment below. We’ll get back to you quickly.

If I put the lore counter on the second or third chapter with Read ahead, do I also get the effects of previous chapters?

No, you don’t. If you decide to start with a later chapter, you won’t get the effects of the previous chapter.

Do I get to choose how many counters to put on a Saga with Read ahead whenever it would get counters?

No, you don’t. You only get to choose it once, when it enters the battlefield.

No, they didn’t. Read ahead didn’t change how old Sagas work, it’s a new ability that all Sagas from Dominaria United have. Once we get new Sagas in the future, they might or might not have the Read ahead ability.

The flavor or read ahead is amazing. The Sagas are essentially stories, depicting various important events. Of course, when you’re reading a story, you can always just skip the boring part and read ahead in order to get to the fun stuff.

That’s exactly what this mechanic does. You can skip the parts that you don’t like, and go straight ahead to the effect that you really need.

In this section, we’ll talk about some interactions with Read ahead, and some common play patterns.

One neat thing that you can do with Sagas is that you respond to the last chapter’s trigger, when it is on the stack. You can use cards like Rescue to return them to your hand. You still get the ability plus, you can replay the Saga.

An even better option is to blink them with something like Teferi’s Time Twist, this way you get another effect of the Saga immediately, without replaying it.

While you could do all of this with Sagas without Read ahead, it’s potentially even better with the new Sagas, as you can get the best effect faster, and then blink possibly before your opponent has a chance to respond.

How to Best Use Read Ahead

Some scenarios will be pretty obvious. You’ll need a certain chapter’s effect right away, so you’ll choose that one. However, sometimes it’ll be harder to decide. Here are a couple of pointers that might help you:

So, now you probably heave a good idea about this new ability and how it works – unless if you read ahead, and didn’t examine the whole article. If you perhaps want to open a cool new Saga, you can try your luck and get a Dominaria United Set booster box.

Until next time, have fun and may you always make the right choice when you’ll read ahead.