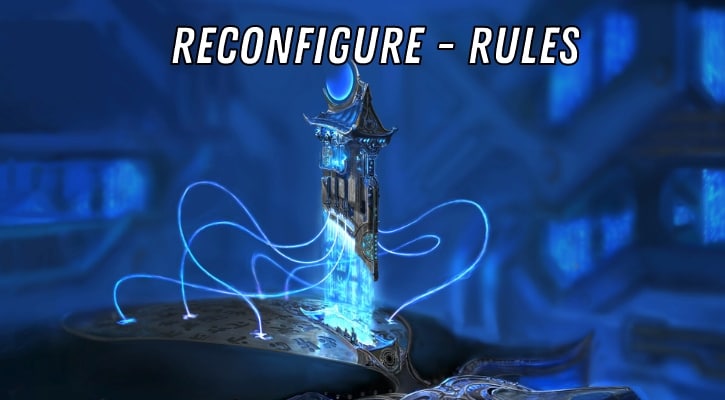 Reconfigure is a new MTG keyword ability introduced with Kamigawa: Neon Dynasty. It’s a quite complex mechanic, and in this article, we’ll explain everything you need to know about it, including:

Since we have quite a lot to talk about, we better get right to it.

How Does Reconfigure Work?

Reconfigure only appears on artifact creatures, which have equipment subtype. When you play such a creature, it does everything a normal creature can do — attack, block, and so on.

However, you can use its reconfigure ability. This ability works in two ways, and you can only use them at sorcery speed.

First one is quite similar to regular equipment. You can pay the card’s reconfigure cost, and attach it to another creature you control. The reconfigure creature is now no longer a creature. Until it becomes unattached.

The other option lets you do exactly that. You can pay reconfigure cost to unattach the reconfigure card. This way it becomes a creature again.

Let’s take a look at some examples.

In order to get it in play, you need to pay three mana. When it comes into play, it’s a 3/2 creature with trample. You can use it as a regular creature, and not worry about it’s reconfigure ability at all.

However, you’ll probably want to use its reconfigure ability occasionally. Let’s say you also have Shivan Dragon in play. You can pay Bronzeplate Boar’s reconfigure cost of five mana, and attach it to Shivan Dragon. It gets +3/+2 and trample, which makes it a 9/7 flying trampler.

If Shivan Dragon dies at some point, your Bronzeplate Boar becomes unattached, which means it becomes a creature once again.

You could also just pay five mana at any time, and unattach Boar, at which point it would become a creature once again.

Similar Stats – But Not Always

Judging by Bronzeplate Boar, you might think that equipment always gives creature’s stats and abilities. Well, that’s only somewhat true. While there will be some similarities between the equipment part and creature part of the card, not everything will always be the same.

This can be seen from Leech Gauntlet. While the creature is a 2/2 lifelinker, the equipment only gives lifelink, without the +2/+2 buff of stats.

Here are some of the most common questions about the reconfigure mechanic. Since this is quite a complex mechanic, there might be some questions that we didn’t answer. In that case, leave a comment below, and we’ll get back to you.

When can I use the reconfigure ability?

You can use reconfigure at sorcery speed. This means at any time you could cast a sorcery. (That’s during your first or second main phase, when the stack is empty.)

What happens when a creature that was equipped with a reconfigured creature dies?

In that case, the equipment with reconfigure becomes unattached, at which point it becomes a creature once again.

Why did my creature die when I used reconfigure?

Here’s the most likely scenario. Your creature, which was equipped with the reconfigure equipment, took some damage in combat. The only thing keeping it alive, was the equipment. When you used reconfigure to move it way, your creature died.

The gear on Kamigawa is pretty special — it’s alive! This is perfectly encapsulated with the reconfigure mechanic. You can use it as gear or as living creatures.

This unusual mechanics enables some interesting interactions. Let’s take a look at a couple of them.

Now here’s an unusual interaction. While reconfigure creatures are equipment, they don’t have equip costs. So you won’t be able to use card like Bruenor Battlehammer to equip them for free.

However, you can use Puresteel Paladin‘s effect.

It gives all your equipment equip cost of zero. All the reconfigure creatures are equipment, so you’ll be able to equip them for free. Nevertheless, you won’t be able to deattach them without attaching them to another creature for free, as that effect belongs to the reconfigure ability.

Here’s a “trick” you can do with reconfigure. You can attack with a creature, that’s equipped with a reconfigure card. Post combat, you can use reconfigure to deattach it. This way you get an extra blocker.

The reason for this is that when you attack with a creature, you only tap the creature that attacking, and not any equipment that might be attached to it.

That’s it for the MTG reconfigure rules. Hopefully, you’ll be able to use your new knowledge to achieve many wins.

If you want to try your luck and open some reconfigure cards, you might want to get a Neon Dynasty Set Booster Box on Amazon.

Additionally, if you want to explore more about Kamigawa, you can check out the following articles:

Until next time, have fun and may you never make the wrong choice with reconfigure.