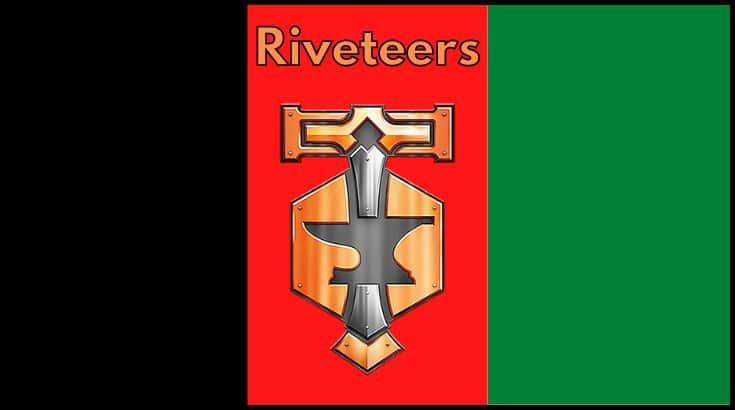 In this article you’ll find everything you need to know about MTG Riveteers, one of the five families of New Capenna. We’ll answer questions such as:

Riveteers is, as the other families of New Capenna a three-color combination. Its colors are:

Riveteer’s symbol is a stylized hammer or perhaps a chipping hammer with an anvil in the middle:

Their motto is: “Always finish the job.”

Riveteers are certainly one of the more special crime families in New Capenna. They are destruction workers, which is not something that you’d expect from a crime gang at first. They are a rowdy bunch of artisans, and as we can expect from some early artwork, they have a boxing ring, where they prove themselves.

Apparently, they can break buildings with ease, and the same thing is true for kneecaps. Ouch! Of course, they have mastered the art of both demolition and intimidation.

Since they have a lot of influence in the building industry, they didn’t have much trouble transforming the lower levels of the city into their own draconic lair. This suggests that we might see some Dragons in this crime family.

Each family will get a signature mechanic. While we don’t know what will be the Riveteers mechanic, it’ll probably be something combat based. This would make the most sense given the Riveteers rowdy nature.

If you’re a newer player, you might be confused by another name for Riveteers – Jund. This name comes from Shards of Alara, a set from 2008. It featured the same color combinations as New Capenna, and the Black-Red-Green shard was called Jund.

Since this terminology was around for a decade and a half, it’s probably going to stick, especially in more experienced MTG groups.

This section will surely get some additions once we get more New Capenna spoilers. For now here’s only one card, but it’s pretty obvious that’it’s going to be an iconic one.

Ziatora’s Proving Ground is one of the New Capenna Triomes, and will become an instant staple in various formats, from Commander to Modern.

You’ll certainly be able to find some iconic cards in the Commander precon. Of course, there will be five New Capenna Commander decks, one for each family. This one is Black, Red and Green, and we can’t wait to see what goodies it’ll contain.

There are also theme boosters. These are great for casual players and beginners, who just want to get a lot of cards in their colors, even if they are mostly commons and uncommons. There are quite a lot of them, as out of the 35 cards in the boosters there’s just one or two rares.

Nevertheless, they’ll be in the colors that you choose. For example, the Riveteers theme booster will contain only cards in Black, Red, or Green.

That’s all about Riveteers – at least for now. Once we get closer to the New Capenna release, we’ll update the article with more information. If you don’t want to miss it, follow us on Facebook or Instagram. This way you’ll get a reminder whenever we post a cool new article, or a new MTG Arena code for free stuff.

If you’d like to explore more of New Capenna, check the following articles: