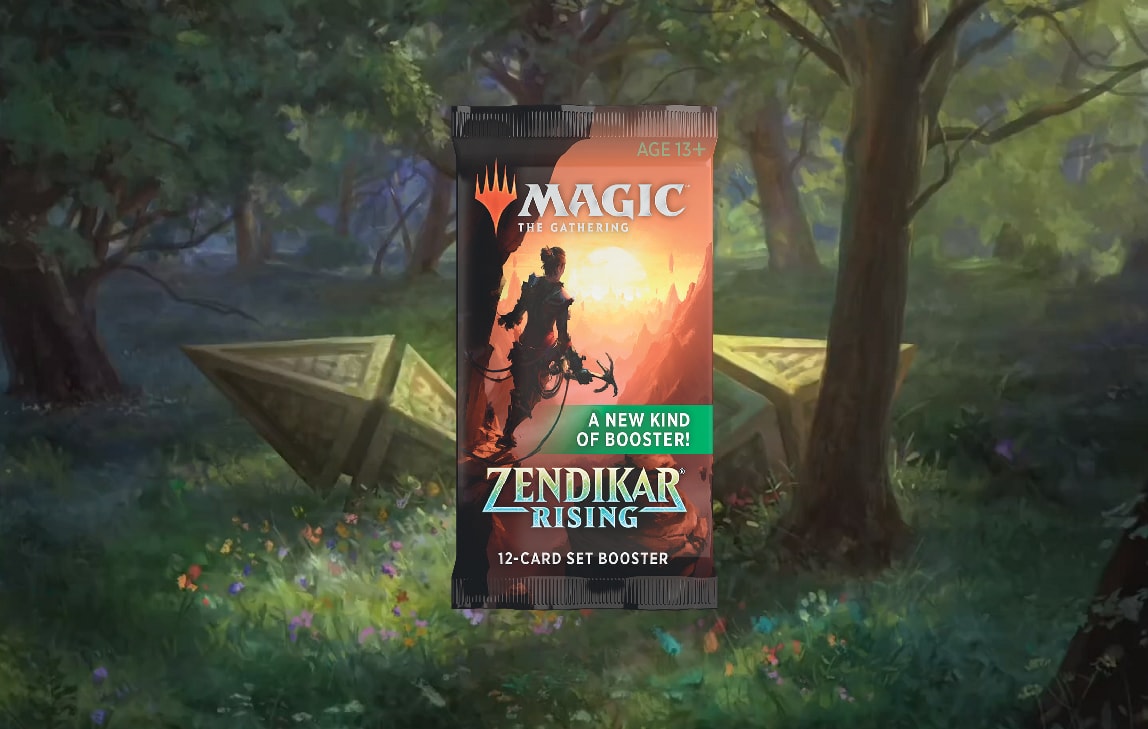 MTG Set Booster is one of the newer boosters. It was introduced with Zendikar Rising in 2020. It’s also one of the more unusual boosters, so today we’re taking a deeper look at Set Booster contents and other details.

What is a Set Booster?

In short, Set Booster is a booster that can contain from 1 to 4 rare or mythic rare cards.

The idea is that there are a lot of players who don’t buy boosters for a draft. They buy them so they can open an exciting rare card. Often times, you’ll just flip through the booster, just to see what the rare is. So why wouldn’t there be more opportunities for getting a rare inside a booster? That would certainly be more exciting for those kind of players.

So with that in mind Wizards made the Set Booster. If you’re afraid that it’ll cost as much as Collector Booster, don’t worry. Mark Rosewater, the head designer for Magic the Gathering stated, that a single Set Booster will cost around a dollar or so more then regular Draft Booster.

If you want to check their price yourself, you can do so on Amazon.

Okay, so with that details out of the way, let’s find out more about the exact contents.

Note that those groups aren’t cards separately wrapped inside a booster. It’s just a way how cards are organized in a booster. The idea is to have multiple different slots in a booster where you can get an exciting card.

You can find the exact contents in the following table:

Now that was just a short overview. Let’s get into more details about those groups, to see what exactly you’re getting.

When you open a Set Booster, you first get to the Welcome part, which consist of 8 cards. The first thing to see out of there is the Art Card.

Art cards were first introduced in Modern Horizons. They’re the same size as regular Magic cards, but they aren’t actual playing cards. They just feature an artwork from a Zendikar Rising Set. Here you can see the art card for Serra the Benevolent from Modern Horizons.

Not every card gets its own art card. In Zendikar Rising, we’re getting a total of 81 different art cards. You can probably expect the most exciting artworks like planeswalkers, powerful creatures, etc.

Now this slot can also get an upgrade, as you have a 5% chance of getting a card art with a gold-stamped signature of the artist. If you’re a fan of Magic art you’ll certainly enjoy these.

Even though these aren’t playable, you can still use them as emblems, tokens, proxyes, etc.

After the art card, you get to the land slot. In Zendikar Rising you’ll get a full art basic land card. Not just that, you have a 15% chance of that land being foil.

Next, you move to the more exciting part of the Set Booster, with 3 cards in the Fireworks section.

The first slot is a common or uncommon with a special Showcase artwork. It could be a card with extended art, or with an alternate frame or art. In short, a card that looks different and usually pretty cool.

If Ikoria had Set Boosters, you could get something like the Boneyard Lurker, which you can see below. Once we get to know more about Zendikar Rising Showcase styles, we’ll update this article with new info.

Second part of the Fireworks are two cards of any rarity. These cards can have a Showcase treatment, but it’s not guaranteed.

First one is your guaranteed rare card. It has the same odds (13,5%) to be upgraded to a mythic rare card as the rare in usual Draft Boosters.

Next card is a foil card of any rarity, which wraps up the Big Finish.

Finally, you come to Epilogue and the last card in the pack. You might think, that it’s probably a token or an ad card, right?

Well, you’d be correct most of the time. However, you have a 25% to get a card from The List, which can be a pretty exciting ending to your Set Booster Pack.

Wait, so what exactly is The List? Well, it’s a curated list of 300 different cards, from different sets all over Magic’s 27 year history.

If you remember Mystery Boosters, you might know that they had a bunch of different cards from all Magic sets including some very old ones. They even kept the same set symbol and artwork (that includes old frames). The only difference is the small planeswalker symbol in the bottom left. So cards on The List are something similar.

We don’t know, the whole list of cards yet. Once we do, we’ll post it here. Nevertheless, Mark Rosewater said that they will show:

The List will slightly change from set to set, but it’ll mostly stay the same. We also get a preview of three cards that’ll appear on The List:

Cards being on The List doesn’t make them Standard legal, so we probably won’t see Pact of Negation back in Standard.

You can only get a card from The List on the token/ad slot 25% of the time.

How Many Rares Are in the Set Booster?

It can be hard to get a clear picture of exactly how many rares are in the Set Booster, with so many odds being thrown around. That’s why we did the math and we can tell you the exact odds for different numbers of rares in your Set Booster.

So all in all, you’re getting 1.34 rares per Set Booster on average. (Or one third of an extra rare per booster.) Note that when we talk about rares here, we mean rares or mythic rares. (One in 7,4 rares is a mythic rare.)

You could theoretically get 5 rares in a booster, but the chances of that are so small, that Wizards basically advertise those boosters containing up to 4 rares. Although, four rares is also pretty unlikely, if we’re completely honest.

Are Set Boosters Worth It?

As always with this kind of question, the answer is: “It depends.”

As this isn’t really saying much, let’s elaborate. As we said in the beginning, the price of a Set Booster (check on Amazon) is a bit higher then that of a regular Draft Booster. However, you’re getting approximately the same amount of rares per dollar spent.

Even though you’re getting a couple of un/commons less, you do have both a Showcase un/common and a foil card guaranteed.

The downside of Set Boosters is that they aren’t draftable. So if you like to organize draft or sealed events for you playgroup, you want to stick with Draft Boosters, of course.

If you don’t like randomized products, these boosters won’t be changing that. Thankfully, we’re also getting Zendikar Rising Commander Decks. If you’re someone who likes to know exactly which cards you’ll get, this is a better product for you.

On the other hand if you like to just crack some boosters for the fun of it, Set Boosters might be better for you. Instead of just shifting through the end of the booster, you have multiple slots where you can get your rare or mythic card. This can make opening packs more exciting.

Set Boosters are especially nice, if you also like stuff like Showcase and Art cards, but you don’t want to spend too much on a Collector’s Booster.

Final Verdict: Set Boosters are great for players who already buy regular boosters, just to open them for fun, as they come with more exciting cards, for only a slightly higher price.

You can find the price of Zendikar Rising Set Booster Box here.

That’s all there’s to know about Set Booster, which looks to be a pretty fun new product. If you have any additional questions, feel free to ask us in the comments below.

In case you’re looking for more Zendikar, you can find everything about Zendikar Rising here.

Until next time, have fun and may your boosters (whichever you pick) contain just the card you wanted.