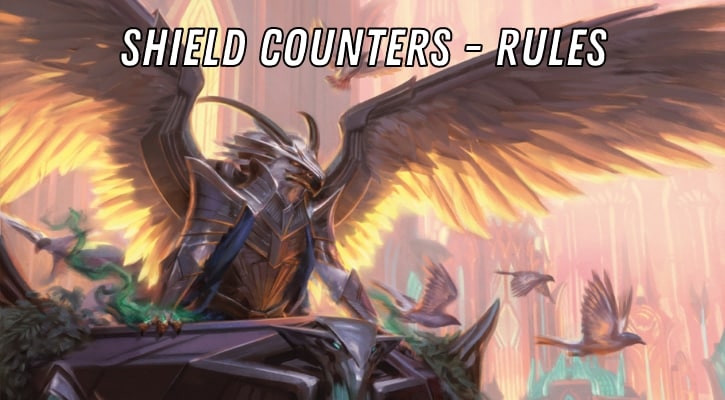 Shield counter are a new type of MTG counters introduced with Streets of New Capenna, and they’re closely tied to the Brokers family. In this article, we’ll talk about everything you need to know about it, including:

How Do Shield Counters Work?

So essentially, the shield counters make a creature harder to remove.

For example, take a look at Disciplined Duelist, a pretty straightforward card. It’s a three mana 2/1 with double strike, and it enters the battlefield with a shield counter on it.

Let’s say that your opponent uses a Murder on it. Duelist, won’t be destroyed, but it’ll lose the shield counter. So next time an opponent would try to destroy it, with another removal spell, they would manage to do so, as the Duelist wouldn’t have a shield counter anymore.

Here are some further question that you might have about this mechanic. As always, if you have a question that we didn’t answer, leave a comment below, and we’ll get back to you.

How much damage does a creature need to be dealt to lose a shield counter?

No, they don’t. Shield counters prevent creatures from being destroyed, and from being dealt damage. They don’t however work against exile effects, so cards like Swords to Plowshares are effective against them.

Yes, they do, as long as they would destroy the creature. They work against cards like Wrath of God, but not against something like Farewell, which exiles.

How do Shield counters work against “damage can’t be prevented” cards?

Can one creature have multiple shield counters?

Yes, if you have a way to put multiple shield counters on a single creature, you can do so.

Can I kill a creature in response to it getting a shield counter?

If a creatures has two or more shield counters are all of them removed at once or just one at a time?

If a creature has multiple shield counters, and it would be dealt damage or destroyed only one counter gets removed.

Flavor is pretty straightforward here. A creature has a shield, a protection of some sorts. Sadly it isn’t very durable, as it grants only a one time use, then it breaks down.

In this section, we’ll discuss some interactions that can come up with shield counters. Honestly, there aren’t that many, so if you’ve come across an interesting one, let us know in the comments.

Well, one easy way would be with proliferate, which multiplies counters of any kind. Evolution Sage is a great card to do so, as all you have to do is play lands, and get more shields for creatures that already have them.

If you want to play with shield counters, you’re in luck. Perrie, the Pulverizer can provide you with a shield counter, and it’s a part of the Bedecked Brokers Commander precon.

The precon will probably have more cards that care about this mechanic, so if you want, you can find more information about the New Capenna Commander decks here.

That’s all about MTG shield counters. Hopefully, you’ll be able to use your newly gained knowledge to win more games. If you want to try your luck and open some Brokers cards with shield counters, you can buy a New Capenna Set booster box.

Additionally, if you want more information about New Capenna, you can explore the following articles:

Until next time, have fun and may your creatures always have shield counters to protect them.