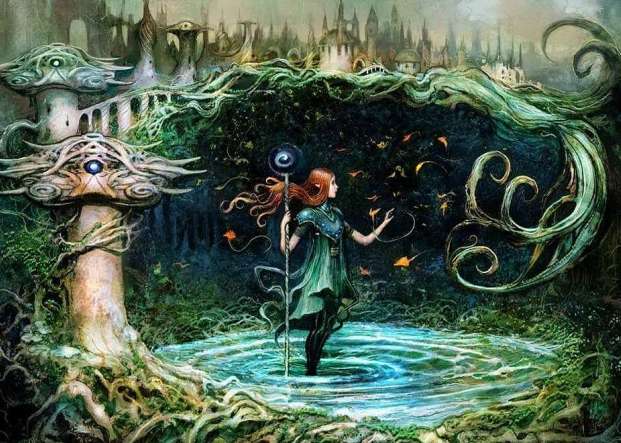 Every MTG Standard Rotation causes some trouble for players. However there’s no need for that to be the case. We can help you avoid unpleasant worries with this guide. Just follow our advice and the whole process will surely be easy.

We’ll talk about which sets are in Standard, when exactly is rotation happening in real life and on MTG Arena. Finally there will also be some great transition events on MTGA. Let’s dive right in!

Which Sets are in Standard Now?

Currently there are eight editions legal in Standard. From Guilds of Ravnica to Theros Beyond Death – these sets are presented in the left column of the table bellow.

As you can see everything changes with the release of Zendikar Rising.

All Ravnica sets (Guild of Ravnica, Ravnica Allegiance, War of the Spark) are out. Same goes Core Set 2020. Throne of Eldraine, Theros Beyond Death, Ikoria will stay in Standard along with Core Set 2021 and freshly added Zendikar Rising.

But What About the Second Rotation?

Let’s look even more into future. What happens after Zendikar Rising? Well, we get one unknown set in early 2021, second one around May 2021. Followed by Core Set 2022 in summer 2021. So that means the second rotation after this one is happening in Fall 2021.

There’s always a year between rotations, which means there’s no need to worry. You should have plenty of time to play with your cards before they rotate.

When Does MTG Standard Rotation 2020 Happen?

It depends. The rotation dates are different for paper Magic and MTG Arena. We know that rotation in paper happens when Zendikar Rising releases. This is on October 2nd, 2020, one week after the prerelease.

On the other hand Zendikar comes on MTGA before in comes out in paper. That’s why we expect Standard rotation to happen on September 24th, 2020. This is the most probable release date for Zendikar Rising, although it’s unconfirmed.

What Happens to Old Cards in MTGA?

Absolutely nothing. You might remember the previous rotation there was a wipe of your entire collection. This will NOT happen this time. You will keep every card you own – they will be playable in Historic.

Historic is an eternal MTG format, created especially for Arena. Eternal format means that it doesn’t have rotations. Think Modern in paper MTG or Wild in Hearthstone. With each new set, new cards are legal in Historic. However cards won’t leave the format, unless they are banned.

Historic contains each set from Ixalan onward plus cards from Historic Anthologies. Amonkhet Remastered will also be added in August 2020.

Game modes where you’re able to play Historic include:

Historic Ranked queues were added not so long ago and it looks like it is becoming a very real format.

There is no “dusting” or similar ways to convert your rotating cards into new ones. Developers are well aware of that, so consequently we’ll be getting special generous events after rotation. These events will help you renew your collection for the new Standard.

Be sure to not miss out on these, since we can expect them to be very profitable. We’ll have more information to share in August 2020.

Why Does MTG Standard Rotation Exist?

You might ask yourself – why does rotation even exist. Well, Standard is a very popular format for a reason. It drastically changes every year. To achieve this there are only two possible paths: power creep and rotation.

Nobody likes power creep. It might be exciting at first to see new and powerful card, but very disappointing once you realize your old cards are now worthless.

That’s why once a year 4 sets rotate out and new ones come. It keeps Standard fresh and exciting with plenty of different cards.

What to Do Before MTG Standard Rotation?

As we said before, it really depends on which medium you’re talking about – digital or paper. Let’s take a look at each of those.

You should probably sell most of your paper Standard cards before rotation. The best time to sell is probably 4-6 months before they rotate out. However if you plan on playing with them you should definitely keep them – that’s why you got them in the first place!

So you kept your cards and now they’ve rotated out. You shouldn’t try to sell them immediately. They are probably at their lowest price point now. In case you don’t need money now, you could wait some months to see if prices will rise. This can be especially true for cards beloved at the kitchen table like Guardian Project or Smothering Tithe.

Since you can sell or disenchant your old cards in MTGA, the biggest thing you can do is not to craft those. Rotation is coming soon and if you’re running low on Wildcards, it might be a better idea to not craft that Angel of Grace for your tribal Angel deck.

On the other hand if you really want to play some deck and you need a key card for it, just craft it. Having fun is the most important part of Magic.

The list could be pretty long so we decided to go with our Top 5 most remarkable cards going out with MTG Standard rotation in September 2020. If you don’t agree, tell us which cards we missed in the comments bellow!

Steamkin was mostly forgotten in the last months of Standard. However, it was once a centerpiece of a mono red deck, it was a big threat that also gave you mana. That was particularly nice with Experimental Frenzy, which is also rotating out.

Latest sets weren’t too kind to mono red and the deck was mostly Tier 2-3. In the future they’ll have to deal with the loss of Steamkin as well.

5. Nissa, Who Shakes the World

Nissa was an absolute powerhouse in Standard. She doubled your mana, made hasty threats and gave you at least two mana back immediately after you played her. Decks were often built in a way to get Nissa in play as quickly as possible.

She also worked well with the next card on this list.

In the past ramp decks often had problems with drawing too many ramp spells and not enough big threats. Opponents might deal with their one big thing and they’d fall behind.

That’s not the case when your threat is Hydroid Krasis. It scaled perfectly into the late game, giving you everything you’d want – uncounterable card advantage, big body and life gain to utilize it. As mentioned before, it was particularly good with Nissa.

But that’s not the only card in Simic colors that was amazingly good.

Growth Spiral was everywhere. At the end of this Standard format it was one of the most played cards in all sorts of high level tournaments.

Hopefully, its rotation marks the end of the Blue – Green era and we’ll see other color combinations come to the top as well.

How do you know if a Magic card is good? Here’s some signs to look for:

Reclamation decks were present through all of the Standard format, which is particularly telling given the final card on the list, which somewhat limited its uses.

Good riddance Teferi! You wrapped the Standard format, changed the basic rules of Magic and were all around annoying to play against.

Last year we predicted a four mana Teferi and we did get Teferi, Master of Time, but that one is probably one of the most fair Teferis, so hopefully we don’t get another format warping planeswalker soon.

Take a trip down the memory lane and take a look at best cards that rotated out in last year’s rotation.

Scapeshift barely missed our list. The reason being that it only saw its time in the sun after Core Set 2020. But the printing of Field of the Dead really enabled one of the most interesting decks we’ve seen in a while Bant Scapeshift. It totally shook the metagame but only for around three months before rotating out.

While seemingly not too powerful this one mana enchantment-vampire held together entire archetype of Mono White Aggro. Providing a body, ramp and a mana sink for just one mana proved to be very good. White aggro decks have struggled for some time, because there was no good replacement for this rare one drop.

When Nexus was in Standard, you could go watch all seven seasons of Game of Thrones only to return to your match where your opponent was still looping Nexus turns. Thankfully those times were over and we are able to take our turns today.

Even though the triple red goblin saw less play at the end of his time in Standard, his impact was always present from his debut in Dominaria. A lot of decks with one-toughness creatures were pushed out of the metagame.

Besides dealing with small creatures, Chainwhirler was also known to take out a planeswalker. However, mono red kept the most of its powerful cards and still saw plenty of play even after his rotation.

He started as a Disruptive Student in 1998. He certainly took his time (pun intended) to become one of the most powerful planeswalkers ever printed. Teferi was either hated or loved, there was no in between.

At one point control decks didn’t even have to run win conditions, Dominaria’s hero was enough. You got to his emblem, exiled everything and keep putting Teferi on the top of your deck with his minus 3. Sooner or rather later the opponent got milled out.

Maybe you miss Hero of Dominaria. But don’t be afraid – there’s probably a 4 mana OP Teferi just around the corner. This way you’ll be able to play 3-4-5 Teferi curve with Hero and Teferi, Time Raveler.

They have been in MTG since the very beginning – Alpha set was the first they appeared in. Even after 25 years Elves are still very very good Magic card – they provide both mana and a body for only one mana. They defined Standard environment as a staple in green decks of all sorts. As such they are number one on our list.

Throne of Eldraine didn’t bring us Llanowar Elves. However, we did get Gilded Goose, which is better in some spots, but worse in others.

Rampaging Ferocidon was banned along with a bunch of other cards, which already rotated out in 2018. Dinosaur remained on the banlist until a couple of weeks before the rotation. Then it was unbanned to keep Field of the Dead decks in check. It was the first card that was ever unbanned in Standard.

If you want to make sure that you won’t miss any important news in the MTG world, be sure to follow us on Facebook or Instagram. Besides all the info you need, we create daily MTG memes. What’s not to like?

With the Standard rotation there will surely be one or more code to use on MTGA, so bookmark our list of all codes for free stuff. If you want to know more about the newest set check Zendikar Rising spoilers here.

Hopefully this guide has helped you prepare for MTG Standard Rotation 2020. Until next time, may you open all the mythics you want.

3 thoughts on “MTG Standard Rotation 2020: Everything You Need to Know”