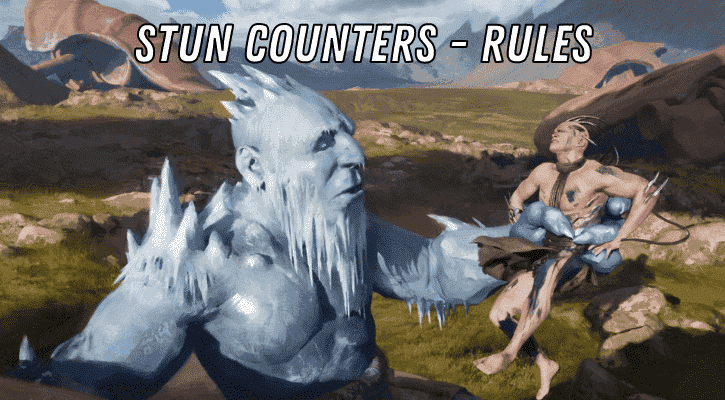 Stun counters are a new type of MTG counters, introduced with Dominaria United. In this article, we’ll talk about everything you need to know about them, including:

How Do Stun Counters Work?

Some cards can give permanents stun counters. If a tapped permanent with a stun counter would become untapped, instead it stays tapped, and one stun counter is removed from it.

As you can see, stun counters are pretty easy to understand, and rightfully so, as they will be evergreen. (Evergreen means that they’ll appear regularly in various future sets.) They will replace the effects of cards like Frost Lynx.

For two mana, you get to tap target creature, you put three stun counters on it, and you scry 1. This means that the creature, you’re targeting, won’t untap the next three times it otherwise would. So essentially, you’ve locked that creature down for this turn, and for the next three opponent’s turn as well.

Another example would be Frostfist Strider, an uncommon creature.

Here we’ll try to answer some common questions players might have about stun counters. If you don’t find what you were looking for, leave a comment below, and we’ll get back to you.

What happens if a permanent with stun counters would become untapped outside the untap phase?

If a permanent with a stun counter would be untapped for any reason, it doesn’t untap, but a single stun counter gets removed from it.

What happens if stun counters are on an untapped creature?

Nothing much. The creature just remains untapped. However, if it at any point becomes tapped, the effect of stun counters will kick in.

What happens if I put a stun counter on a land?

What happens if I put a stun counter on a planeswalker?

Mostly nothing. It would prevent them from untapping, but a tapped planeswalker can still use its abilities. However, it could help you against various Gideon cards, such as Gideon, Ally of Zendikar – against his first ability.

Why were stun counters introduced?

Stun counters were introduced to replace the “it doesn’t untap during its controller next untap step” wording. Stun counters make such cards less wordy, and they have some additional uses and interactions.

In our rules articles, we also like to take a look at what’s the flavor of the discussed mechanic. This time around, the flavor is pretty self-explanatory. A creature with stun counters is stunned, so it won’t be able to participate in combat, or use its taped abilities.

In this section, we’ll talk about interactions and uses that stun counters have.

The first simple interaction is with proliferate. Whenever you proliferate, you can choose any number of players and counters, and you put another kind of counter they have on them.

So you could use proliferate on a permanent that has at least one stun counter, in order to keep it tapped for an extra turn.

The easiest and the most obvious way to remove stun counters, if to untap a creature as many times, as it has counters. However, you could also use a card like Heartless Act in order to remove counters. Some creatures, like Sanctuary Warden actually reward you for removing counters, which is a great way to get some value.

Of course, you could also simply use creatures with stun counters for other effects. They can still be sacrificed to various sacrifice outlets, you can use them to fight with spells like Hunt the Weak and so on.

That’s all about MTG stun counters. Now you should have a good idea of how these counters work, and how to use them to win games.

If you want to open some of the very first cards that use stun counters, you can get a Dominaria United Set booster box.

Furthermore, if you’re looking for more MTG content, here are some articles for you to check out:

Until next time, have fun and may your creatures never stay stunned for long.