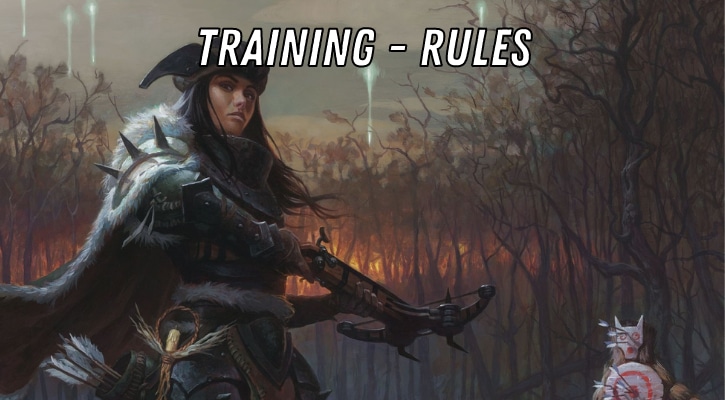 Training is a new MTG keyword ability introduced with Innistrad: Crimson Vow. In this article, we’ll talk about everything you need to know about it:

How Does MTG Training Work?

This ability appears only on creatures.

If a creature has training, that means it essentially has the following text: Whenever this creature attacks with another creature with greater power, put a +1/+1 counter on this creature.

It has just one power, but this means that you’ll be able to easily train it. When you attack with it, and with at least one other creature with power 2 or greater, you get to put a +1/+1 counter on Sharpshooter.

It’s now a 2/5, so the next time it attacks, there will have to be another attacker with power 3 or greater alongside it, in order for Sharpshooter to get another counter.

Here are some of the most common question about how training works. If you have another question that we didn’t answer below, let us know in the comments. We’ll try to get back to you as soon as possible.

If I attack with multiple creatures with greater power, will the creature with training get multiple counters?

No. In one attack, you can only get a single +1/+1 counter. It doesn’t matter if there was a single attacker with greater power than the trainee creature, or if there were ten of them.

Can a single creature with high attack trigger multiple creatures with training?

What happens if I kill the big creature in response to the training trigger?

If the creatures have already attacked, the trigger will already be on the stack, and the creature with training will still receive the +1/+1 counter, (if the greater power requirement has been met).

So, let’s say that you have a removal spell in hand, and the opponent has a 1/4 with training and a 5/5. If you want to kill the 5/5 you don’t want to wait till they get to declare attackers step, as at that point it will be too late to prevent training from happening. This means the last chance to remove the big creature is in the beginning of combat step. That way, your opponent won’t get a +1/+1 counter.

It isn’t easy to survive in Innistrad, the world of terrors of all sorts. That’s why humans have to train to be prepared for whatever comes their way.

The training mechanic represent humans, who are apparently very talented, and can quickly learn a thing or two from their superiors.

Let’s take a look at some interesting interactions that can come up with training.

There’s an interesting interaction happening with training in coven, one that you might encounter in your Double Feature Innistrad drafts.

Most of the card trigger at the beginning of your combat, at which point the power change won’t happen yet. However, there are some cards like Might of the Old Ways, which could get or lose counters based on how you place your +1/+1 counters.

While this interaction won’t happen that often, it is a useful thing to keep in mind when it does.

If you’re a fan of both the training mechanic and Commander, you’re going to enjoy Torens, Fist of the Angels for sure, as it’s a perfect training Commander.

Not only does he have training itself, he also makes 1/1 tokens with training, whenever you cast a creature spell.

That’s all about the MTG training mechanic. You should now know everything you need in order to turn it to your advantage.

If you want to try your luck, and open some cards with training, you can purchase a Set Booster Box on Amazon.

For more information about Crimson Vow, and other mechanics from the set, check the following articles:

Until next time, have fun and train hard, play hard.