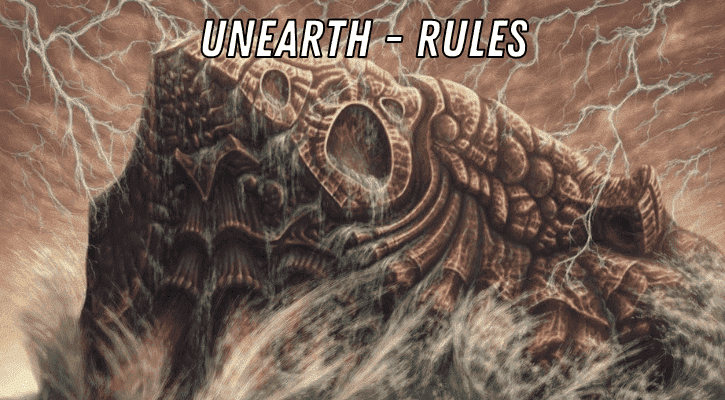 Unearth is an MTG keyword ability, first introduced with Shards of Alara, back in 2008. It has recently returned with The Brothers’ War. In this article, you’ll find everything you need to know about it, including:

How Does Unearth Work?

Essentially, you can get a one-time use from creatures with unearth, when they’re in your graveyard.

You can play it from your hand for three mana as a 2/1 flyer. When it’s in your graveyard, you can pay two mana, and it comes into play with haste. At the end of the turn, or when it leaves the battlefield, you’ll have to exile it.

Some cards, like Simian Simulacrum have both the unearth ability and an enter-the-battlefield effect.

Such cards are particularly useful, as you’ll also get their enter-the-battlefield effect when you play them for their unearth cost. With Simian Simulacrum, you’ll get to put two +1/+1 counters on one of your creatures, so you’re getting a spell like effect, plus a one-time-use hasty creature.

Here are the answers to some frequently asked questions about unearth. If you don’t find what you were looking for, leave a comment below. We’ll get back to you as soon as we can.

What happens if I return an unearthed creature to my hand?

If a permanent that was unearthed would leave the battlefield for any reason, it is exiled instead. You still have to exile it.

What happens if a creature with unearth is blinked?

Let’s say you use an effect like Ephemerate on one of your creatures that you’ve unearthed this turn. The replacement effect of the unearth mechanic sees the creature leaving the battlefield, but since it’s already going to the exile, it doesn’t do anything. Thus, your creature is returned to the battlefield, and isn’t bound by the unearth clause no longer, meaning that you get to keep it.

Can I play a card for its unearth cost from my hand?

No, you can’t. You can only use unearth cost of a card, if it’s in your graveyard.

Why does a creature with unearth gets exiled?

This was a necessary, as otherwise cards with unearth would be simple too powerful, as you’d be able to recur them over and over again.

Can I discard a card with unearth and later use its unearth ability?

Yes, you can. If you have a card with unearth in your graveyard, you can use its unearth ability. It doesn’t matter how it got into the graveyard.

Can you unearth at instant speed?

No, you can’t. You can only use unearth at any time you could cast a sorcery spell.

Can unearth activation be countered?

Not with traditional counterspells, like Counterspell. They can be countered with cards that can counter activated abilities, for example with Stifle.

The flavor of unearth is pretty simple. The creature comes from the graveyard (underground), and returns to the battlefield. Of course, since resurrections never truly works, you’ll have to exile it soon, thus disabling it to ever return.

In this section, we’ll take a look at some interesting interactions and mini-combos with unearth.

The easiest way to do so is with sacrifice outlets (cards that let you sacrifice creatures or permanents for an effect). If you have such cards in your deck, you can unearth a creature, attack with it, and if it survives the combat, you can sacrifice it afterwards. This way you got an attack in, and value from the sacrifice effect.

Another use is with the previously mentioned enter-the-battlefield effects, as well with activated abilities. Since the unearthed creature gains hast, you can use its activated abilities, even if they include tapping the creature.

If your other cards care about creatures entering the battlefield, they’ll also work nicely with creatures with unearth. These are cards such as Rumor Gatherer or other cards with alliance mechanic.

Also, don’t forget that you the creature didn’t have to die, in order for you to unearth it from your graveyard. If you have self-mill cards, like Millikin, you’ll also get additional value from your unearth cards. The same is true for the discard effects like Faithless Looting

If you’re a big fan of both Commander, and the unearth mechanic, you can build a 100-card deck around this mechanic. Here are a couple of potential commanders:

Sedris gives all creatures in your graveyard unearth. This enables many interesting interactions. Perhaps you put Lord Xander, the Collector and then unearth it, possibly getting all three of its effects in a single turn.

Mishra, Tamer of Mak Fawa is a newer card that work similarly, albeit it takes you into another direction. With this one, your artifacts have unearth, which makes the deck completely different.

Whichever of these two you’ll choose, you’ll surely be able to build a very exciting Commander deck around it.

If you do decide to build a dedicated unearth deck (whether in Commander, or in a 60-card format), you could use a fascinating interaction with end-the-turn effects.

Sundial of the Infinite is a great repeatable effect of getting this effect. What you want to do is to put your triggered effects from the unearth cards on the stack, then use Sundial to end the turn. The abilities on the stack will get exiled, and you won’t have to exile your creatures with unearth.

Just keep in mind that if these creatures would leave the battlefield in any of the later turns, they’ll still be exiled instead, as the other part of the effect is still in progress.

Obeka Brute Chronologist is another such effect, that can also slot perfectly in a Sedris, the Traitor King Commander deck.

If you want to keep your creatures along for longer, you can also use the blink effects, like Momentary Blink. As we’ve talked about in the FAQ section, this essentially removes the unearth exile clause from the card.

That’s all about the unearth mechanic. Now you know all the interactions these mechanic enables, so you’ll be able to you use that to win more games. If you’d like to open some new unearth cards, you can buy a Brothers’ War Set booster box.

Cards with unearth are certainly not the only interesting one that come in this set. If you want to explore more interesting cards that you can open, check the following articles:

Until next time, have fun and may you successfully use your unearth cards for many victories.