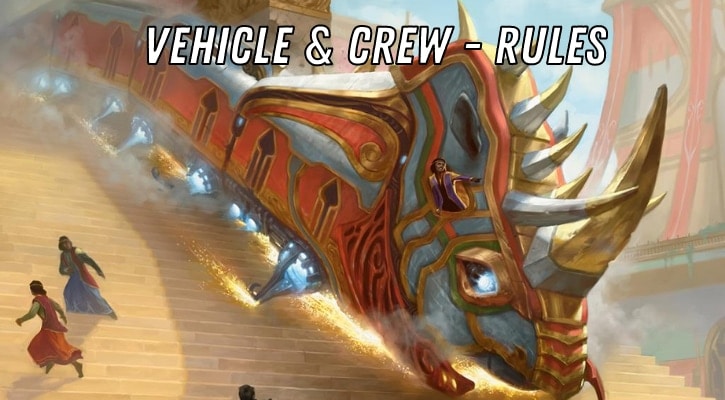 Vehicle is an artifact subtype, and it’s closely tied to the crew mechanic. It first appeared in Kaladesh, and has since became deciduous. (That’s a mechanic, that while it’s not evergreen, it can appear in any set that needs it.) Vehicles and crew can be a bit tricky, so today we’ll explain everything you need to know about their rules, including:

How Do Vehicles and Crew Work in MTG?

Vehicle is an artifact subtype. Although they look like it, they aren’t creatures. Most of them also have the crew keyword.

Crew X means, that you can tap any number of creatures with total power X or greater, and the vehicles becomes a creature, with power and toughness as noted in the bottom right corner.

Here’s Irontread Crusher, one of the simplest MTG vehicles.

When you play it, it isn’t a creature. It’s just an artifact without power and toughness.

It does have crew 3, though. This means you can tap any number of creatures with total power 3 or greater, and it becomes a 6/6 creature.

Here are some of the most common questions about vehicles and the crew mechanic. As always, if we didn’t answer your question, leave a comment below, and we’ll get back to you.

When do I need to crew the vehicle to be able to attack with it?

When do I need to crew the vehicle to be able to block with it?

At the latest, you have to do it in your opponent’s declare attackers step. Once you move to declaring blockers, if your vehicle isn’t crewed, you won’t be able to block with it.

Why I wasn’t able to attack / block with my vehicle?

The most likely scenario is that you missed the window for crewing, and you were already in the declare attackers / blockers step.

Flavor is pretty obvious here. You need drivers to drive (crew) the vehicles. Once you have them, you can drive them. Of course, it’s a bit weird to fight wizards with trains, but that’s just the way it is.

There are various interactions that can come up with vehicles. Here are just some of the most interesting ones.

Let say you have a creature with small power and two vehicles. You can potentially use the creature to crew the smaller vehicle, and use it to crew the other vehicle.

While this can come up now and then, it’s pretty funny flavor-wise, which was also enraptured by @flavorjudgedraw:

In this image, you can see the following chain:

One interesting thing with vehicles is that you can crew them even after they’ve become a creature. While this doesn’t happen often, if you want your creature to be tapped for whatever reason, you can always crew a vehicle with it. (Provided it has enough power.)

There are also some special ways to crew your vehicles. Dermotaxi doesn’t have the crew keyword, for example. Instead, it gives you an option to tap two untapped creatures, so it’ll become a creature.

Peacewalker Colossus is also a great option to crew your vehicles, as it lets you animate Vehicles by paying two mana.

If you’re a Commander player, you might want to explore the mechanic in that format. Wizards recently released a Commander precon called Buckle Up, which is centered around Kotori, Pilot Prodigy.

Kotori makes your vehicles easier to crew by giving them crew 2. Besides that, it also improves them by giving one artifact creature lifelink and vigilance at the beginning of your combat.

If you want, you can buy Buckle Up on Amazon. If you’d like to know more about the deck, check everything we know about the Neon Dynasty Commander decks.

You can also use vehicles for:

Anyway, that’s all about vehicles and crew mechanic. Hopefully, you now know all the intricacies about them, and you’ll be able to convert that knowledge into more wins.

If you want to improve more of your Magic knowledge, you can read the following articles:

Until next time, have fun and may you never find yourself without a driver for your awesome vehicle.