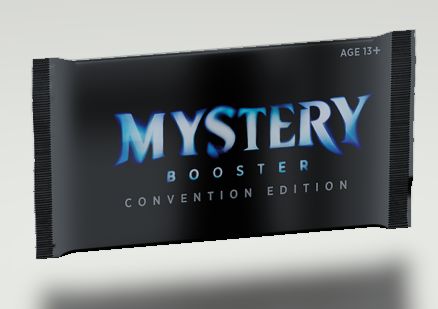 What is Mystery Booster?

Mystery booster was first announced on October 10th, 2019 with little to no information on what to expect. Magic Fest Richmond was the first tournament where player could open Mystery boosters without knowing what’s in them.

It’s probably the most unusual Magic product ever made outside the silver-border cards. The Mystery booster contains cards from all over Magic’s past. The oldest cards are from Mirage, which was released way back in 1996!

Drafting the set will definitely be something special, since there aren’t any clear synergies. So it’s kinda like Chaos Draft.

There are 1694 different cards in the set:

What’s in the MTG Mystery Boosters?

What are Test Cards?

Wizards (creators of MTG) have to test cards before they print them. To play with them they create their own proxies by putting a sticker on a regular Magic card.

The test cards in a Mystery Booster are a reference to those. This cards look like it has a sticker on the regular card. (It’s still just a printed card.) The Maro’s Gone Nuts is “stickered” on a Doubling Season. Test cards aren’t made for constructed play but can be used in the drafts at conventions.

You can check all of them at Mythic Spoiler.

Are There any Good Cards in Mystery Boosters?

Definitely. Here some of the most valuable cards you can get in Mystery Boosters:

There are plenty of good cards at common and uncommon too like Path to Exile and Lightning Bolt. However, there are also plenty of bad ones.

You can check the full list of cards here.

What are Convention Mystery Boosters?

As the name suggests these boosters are the one you get at conventions. Usually those will happen at Magic Fests until the end of the 2020. You can check them out here.

Only these boosters contain test cards. Convention Boosters aren’t for sale at your local shops.

Regular Mystery Booster is the same as the Convention one, except it doesn’t contain test cards. However, they do contain a foil card instead – one that isn’t a part of 1694 regular cards in the set. How exciting is that?

You can buy them at your local game store from March 13th, 2020 onward. You can also get them on Amazon. When there will be more information about when are where you can get them, we will update this article.

As said before retail boosters have a foil slot instead of a playtest card slot. There are 121 of different foil cards. Some of these cards are usually pretty good like Amulet of Vigor, but there are also some fun ones like Storm Crow.

You can see all of them listed here.

How to Draft Mystery Boosters?

You’re probably used to drafting regular Magic sets. Usually there are some kind of synergies involved. Not here though, because the set contains over 1600 cards.

So how should you draft Mystery boosters? With the help of a good old Magic acronym – BREAD. It tells you which type of cards to pick first. The acronym is a bit dated for regular Standard draft sets nowadays, but for the Mystery draft, it will come in handy.

The first thing to look for in your Mystery booster are the bombs. Those are the best cards that will win you the game on your own. Usually they are mythics or rares, but can sometimes also be uncommons.

Some examples from Mystery booster are:

You should always first pick the most powerful cards in the booster.

Immediately after the bombs, comes removal. Most of the bombs are creatures, and if you have removal spells, you can answer them.

Mystery set has plenty removal spells such as:

Creatures with evasion are creatures that are hard to block. They usually have a keyword like Flying, or Intimidate. You need those to win the game through a stalled board.

The acronym suggest that next cards should be the aggressive one. We’d say while it’s not necessary to draft aggro cards, it is important to keep aggro in mind. That means that when in doubt which card to pick – use it’s mana cost as tiebreaker and pick the cheaper cards.

While Frilled Sea Serpent is probably a better then some random four drop like Laboratory Brute, you have to consider that in some games you won’t get to six lands. In those games Brute is immensely better than the Serpent. Now, we’re not saying that you should necessarily pick Brute over Serpent – just that you have to keep your mana curve in mind and generally pick cheaper cards.

The acronym finishes with duds, bad cards that you don’t want to play, should be picked last. This really goes without saying and it’s probably here, just to make the acronym work. BREA just doesn’t have the same ring to it.

The one thing we’d suggest is to pick efficient cards between removal and evasion. Those are cards that are not necessarily bombs, but have a good enough ration between their effect and cost. You know, cards like Ghor-Clan Rampager or Qasali Pridemage.

All in all, try to get some bombs and removal, play efficient creatures and you should be good to go.

That’s all about the Mystery Booster. The set releases on March 13th, 2020. You can already order it on Amazon.

Until next time – have fun with some mysteries.