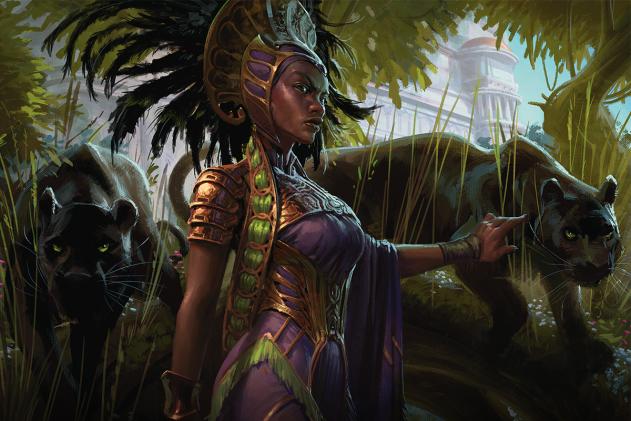 Are you looking for new Brawl decks from Core 2021? If so, we have some suggestions for you – with 11 decks built around commanders from M21.

Most of these decks are still a work in progress, but all of them are pretty fun. Once you’ll play with them for a bit you’ll probably see which cards you can swap to make them better. In the future this decks might get an update, so fell free to share your feedback in the comments bellow.

Anyways, let’s get right to it and take a look at some new Brawl decks.

Basri is a perfect commander for an aggressive Brawl deck – and this build is very aggressive. Over 58% of nonland cards cost two mana or less.

You really want to play one drop into two drop into Basri. Lots of deck will have problems dealing with a start like that. Sometimes you’ll even manage to ultimate Basri on turn six, which is totally bonkers.

So if you want to beat your opponents down with cheap white creatures, look no further.

Mangara is at the head of another white Brawl deck. Nevertheless, it’s quite different from the Basri one.

It tries to be more controlish with a small life gain theme. It’s not that easy to make all of that work when you’re limited to just white, but the deck can manage to win some games every now and then.

So if you’re looking for a mono white deck that’s not totally aggressive, you can give this one a spin. However, if you’re a more competitive player, it probably isn’t for you.

This Barrin’s deck wants to play a bunch of bounce spells to go with the Barrin’s theme. You bounce your own or opponent’s creatures – depending on how the game plays out.

When you’re behind, you’ll probably want to bounce their stuff. Then you can use one of your 10 counterspells to get rid of it for good.

If you’re ahead, you can do some fancy plays and bounce your creatures to get their enter-the-battlefield effects again, or to use their Adventure parts. Bouncing your Voracious Greatshark to counter their commander again is particularly sweet (maybe not for your opponent, though).

Vito, Thorn of the Dusk Rose

Looking for a Vito Brawl deck? Here’s a nice one you can try.

Of course, the deck is far less powerful then the one you might build in Commander. There’s no Exquisite Blood on Arena. However, there are still plenty of sweet mini combos present in this deck and you do have Grim Tutor to find the card you need.

There’s a bunch of cards that gain life in this deck – over a quarter of your deck, actually (and that’s counting lands). All of them naturally work well with Vito. You can also convert all that life into card advantage with Bolas’s Citadel.

The deck even plays a planeswalker deck card – Sorin, Vampire Lord. If you have Vito in play, his second ability can deal 8 damage to your opponent. You might already have one in your collection, as it was a part of Mastery Pass in Core 2020. If you don’t, you can just replace it with something else, as it’s by no means a key card in the deck.

This is not your regular mono red deck. It’s more of a big red deck. Gadrak is used both as an early blocker against aggressive deck or just as a mana ramp. You kill their creature, you get a Treasure. The same is true if your creature dies.

Of course, there are some hoops you have to jump through. The creatures have to die on your turn and tokens don’t count.

The deck also includes a small planeswalker theme with 8(!) planeswalkers and Sarkhan the Masterless to make all of them into Dragons.

Subira is a very cool commander for a red brawl deck. She does everything! She attacks, makes your creatures unblockable and refills your hand. What’s not to like?

The deck can prey on other decks that stumble early or just don’t have a wrath ready in the right time. It also has the tools to compete in the late game – mostly by drawing a bunch of cards with Subira.

So if you want to play some quick games of Brawl, go ahead and try this deck. It’s probably one of the strongest ones from these new M21 Brawl decks.

The deck naturally focuses on card draw with over 15 cards, that draw more cards in one way or another. Of course, it also has plenty of ramp (as a green deck should).

If you like a Brawl deck with both card advantage and good creatures, you can’t go wrong with Jolrael.

Do you like value? This Niambi deck is packed full with value and is all around a very fun deck to play.

Niambi unlocks all sorts of interesting play patterns. You can bounce your Adventure creatures to get their first part again. You can reuse enter-the-battlefield effects. Life gain is also very useful, especially when you target something expensive, like Agent of Treachery.

If you’re looking for a fresh experience in Brawl with one of the Core 2021 commanders, Niambi is a great choice.

Big efficient threats, with built-in card advantage is the name of the game with this Radha, Heart of Keld Brawl deck.

Looking for a tribal deck? If so, you should try Rin and Seri.

While the deck isn’t the strongest out there, it does provide fun gameplay. Sometimes, you’ll find sweet combos, however there are some nonbos too.

For example, if you have both Selfless Savior and Feline Sovereign in play, you won’t be able to protect your cats (including your commander) with Savior. Oops.

Just as a reminder, if you’ll build this deck. Rin and Seri is a Buy-a-Box promo, which means you can only get them by buying a 45 Pack Bundle in Store or by crafting it (using a mythic wildcard).

Ugin is here more for fun than anything else. It’s very hard to win with this one, and you’re probably better off by replacing it with the smaller one – Ugin, the Ineffable.

However, if you just want to mess around a bit, you can try this decklist out. Don’t spend too many wildcards, though.

Do you want more Magic content? Give us a follow on Facebook or Instagram. You’ll get Magic news, spoilers, alerts for new articles, Arena deals and codes. Speaking of which, you can find all currently available codes for Arena here.

Anyways that’s all for today. Until next time, have lots of fun with your new M21 Brawl deck and may you always have Arcane Signet on turn two!