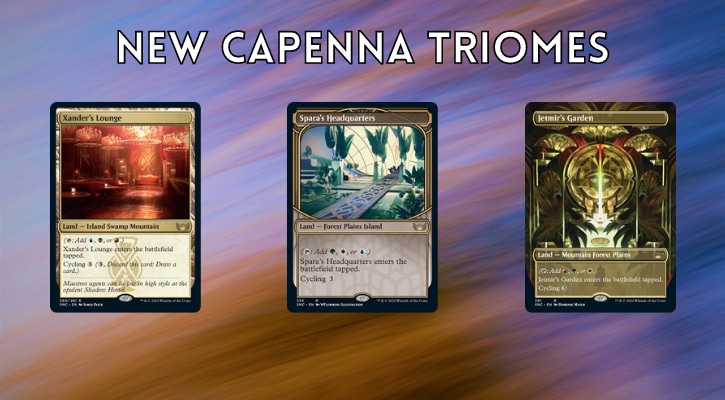 Wizards completed yet another cycle, this time with five New Capenna Triomes. They come in not one, but in three different styles. In this article you’ll be able to find all of them. We’ll also share some additional information about them, which you might find useful.

First up, here are the regular, simple versions:

These are the so-called skyscraper versions of the New Capenna triomes. They have a special frame and text box. There’s also no flavor text, nor reminder text, which makes the card cleaner to read.

Next up, are the borderless versions. These have a bigger art which goes right to the edge of a card. The reminder text is also gone, and the text box is smaller. The art is in focus with these, and these are expected to be the most sought after triomes.

Where to get New Capenna triomes?

You’ll be able to open these in Draft, Set or Collector Boosters of New Capenna. Of course, the Draft boosters most likely contain the regular versions, while Collector Boosters have the biggest chance for premium alternate-art versions.

Because when this type of a land first appeared back in Ikoria, all five were named Triomes, like Zagoth Triome.

Multiple reasons. They provide three colors of mana. YOu can cycle them away, when you don’t need them. Finally, they also have three basic land types, which makes them work with fetch lands, like Flooded Strand.

Anyways that’s all about the New Capenna triomes. Which ones are your favorite? Let us know in the comments below.

Besides, if you want to explore the new set a bit more check the following articles:

Until next time, have fun, and may you open your favorite triome in your next Capenna pack!