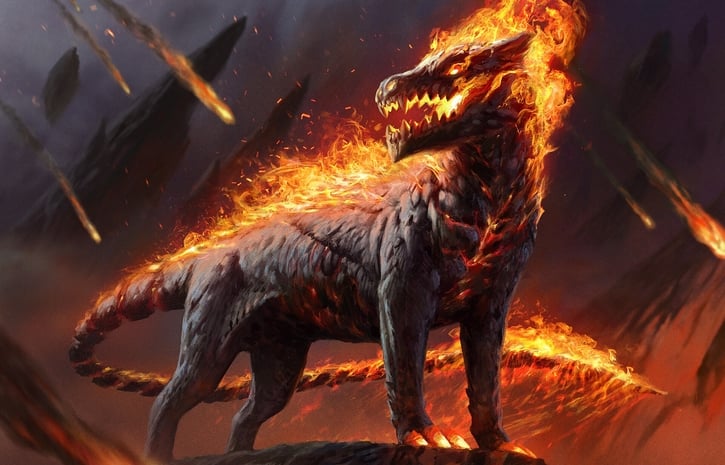 If you like a deck, make sure to check the streamer’s Twitch or YouTube channel by clicking on their name (next to played by).

Each decklist opens in a separate tab, as we had some problems with the loading speed, when we put multiple decklists in one article. When you open a decklist, you can copy it by clicking the Arena icon in the top right corner. Then import it to Arena by going to Decks section and click Import.

With all that said, let’s get right to it.

Zendikar Rising is bringing us plenty of different tribal strategies, hopefully there’s at least one that you’ll like.

Are you looking for a Rogue deck? This one can be a great choice for you.

You’re also playing Slitherwisp, which isn’t a Rogue, but works well with them as many have flash.

This black-white deck focuses on tribal synergies between Clerics. One very good Cleric from the previous set is Vito, Thorn of the Dusk Rose, which works great with the life gain theme.

If you like a bunch of life gaining shenanigans and triggers this is the right deck for you.

Red-White got some serious support for both Warriors and Equipments. Akiri is great, as it’s Nahiri, Heir of the Ancients, which is perfect fit for this deck.

You have eight copies of three different equipments:

Great deck, if you like being aggressive decks with a twist.

It’s time to party with this sweet blue-white party deck.

This deck supports perhaps the best white one drop, that we’ve seen in a very long time. It’s the Archpriest of Iona. Even if you don’t manage to get to full party, a one mana 2/2 is already a very good deal.

Linvala, Shield of the Sea Gate is similar, totally busted if you have the whole party, but still amazing otherwise. The big problem for party decks will certainly be mass removal spells like Shatter the Sky, but Linvala takes care of them.

This is a different take on party. Instead of blue, you’re using both red and black. Zagras, Thief of Heartbeats can cost very little mana, and even if you manage to reduce its cost just to four mana it’s a pretty insane card.

Most of creatures in this deck have multiple creature types and most of them are Humans. This is great as General Kudro of Drannith can be used to its full potential.

If you like decks with lots of creatures, this is certainly an option for you.

Played by: yours truly

I’ve been messing with this deck for a while and it’s probably more cute then good. Sure Cat tribal didn’t get much support from Zendikar Rising, but there’s at least Felidar Retreat, which is very good.

We get Kaheera, the Orphanguard as a companion, as we play only cats and Tagledflora Hedron.

The deck is pretty vulnerable to both mass removal spells and Tier 1 decks. So don’t go crafting too many cards from the deck if you can’t afford it. On the other hand, you might already have most of the cards for the deck and it can be fun to play.

Next up, two decklists featuring the two main characters from the Zendikar Rising story – Nissa and Nahiri.

Fan of a midrange decks? Here’s one for you. The deck plays some really good midrange cards and a lot of them are from Zendikar Rising. Besides Nissa, you’ll have access to:

There’s also a splash of white to enable Mythos of Nethroi.

If you’ve been missing a midrange deck in Standard, you can give this one a try.

Nahiri works great with Winota. Both work great with Embercleave. So now you have three amazing mythics and you just need a right supporting cast for them.

You have some good Winota targets with:

There are a bunch of smaller creatures like Akoum Hellhound to enable it.

So if you want to try a new Winote deck, this one looks pretty fun.

First we have the aggressive version. Deploy lands, smash down with your cheap landfall creatures and equip Embercleave.

Maybe you want to take your time with your landfall triggers and get to the big stuff? Even that can be done quickly with the help of Lotus Cobra.

You’re playing 14 actual lands and 26 double-faced spell lands. This means you’ll probably never run out of gas or out of lands. You’ll get to do everything you’ll want.

The deck looks like a ton of fun and it plays 61 cards total, because why not, apperently.

Another fun landfall deck is built around Omanth, Locus of Creation. You have tons of ramp and you can get to your most powerful cards very quickly.

Even if that isn’t enough, you can also use Lithoform Engine to copy card like Genesis Ultimatum. Pretty amazing, right?

Crokeyz bulit another fun and powerful deck. This one is built to utilize Agadeem’s Awakening.

For seven mana, you can get back:

When you don’t have enough mana, you can just play it as a land.

Saffron Olive built this deck to see if a deck without any actual lands is possible and it look like he made it.

Is it the best version of blue-white control? Almost surely no. Is it fun to play? You bet!

It really goes all in and doesn’t play a single colored card. You also have a bunch of different colorless lands that you can use for value.

This deck is probably not the best one, but surely the most weird looking one.

Fans of Hedron Crab, rejoice! You get to mill your opponents with your little buddy, once again.

You also have Glasspool Mimic to make more crabs, as well as Teferi’s Tutelage, a centerpiece of many mill decks.

For defense you’re using bounce spells like Unsommon and Sea Gate Stormcaller to copy them. Some types of decks will definitely have problems dealing with this one.

Black-Red Scourge of the Skyclaves

Black-Red Scourge of the Skyclaves: Decklist

Do you like Death’s Shadow in Modern? Try Scourge of the Skyclaves in Standard.

Make your opponent lose life points quickly. You can also pay 3 life for 8 of your lands, so you can quickly get under 20 life to deploy Scourge.

Once you have it, equip it with Embercleave and deal with your opponent.

Maybe you liked your old deck, or maybe you just don’t have that much wildcards to spend. Whatever the case, here are some decks from previous Standard format, that got nice support in Zendikar Rising.

sandydog is a master of red decks. This is yet another great mono red deck too play early on in the new format. If you like quick games, or just mono red in general or if you don’t have much wildcards to spent, this deck can definitely win games.

That’s especially true because some other Zendikar Rising decks, might not be prepared for this kind of aggression.

Mono green was a staple in the previous Standard format. If you liked it before, you’ll probably enjoy this version too.

Some of the new cards in the deck are:

This is a new take on the old Blue-Red Spells archetype. It features two new Wizards which both play amazingly well in this archetype. One does a Snapcaster Mage impression, while the other one can be a 4/4 for two mana. Pretty neat.

The deck also features old favorites in Sprite Dragon and Stormwing Entity. If you have most of the card for this deck, it might be a fun one to try.

Our final deck, dusts of a deathtouch lord in Hooded Blightfang. Naturally most of the creatures have deathtouch.

This makes Porcuparrot an amazing cart to mutate with. Put it on a creature with deathtouch, tap it and kill any creature.

Some of the new inclusions are:

All in all, this deck looks like one of the most fun Zendikar Rising decks to play.

That’s all about new Zendikar Rising decks. Hopefully, you found something for you’ll enjoy.

If you’ll also be drafting this set, make sure to check our Zendikar Rising Draft Guide, which features a bunch of useful information.

Maybe you’re a Commander fan? In that case you might want to read some of the following articles:

Anyways, if you don’t want to miss another round of fun decklists, give us a follow on Facebook or Instagram. You’ll get reminders about new deck, spoilers, Magic memes and Arena codes. Speaking of which, you can find all currently available Arena codes here.

Until next time, have fun and have a blast with Zendikar Rising – both on Arena and in paper.