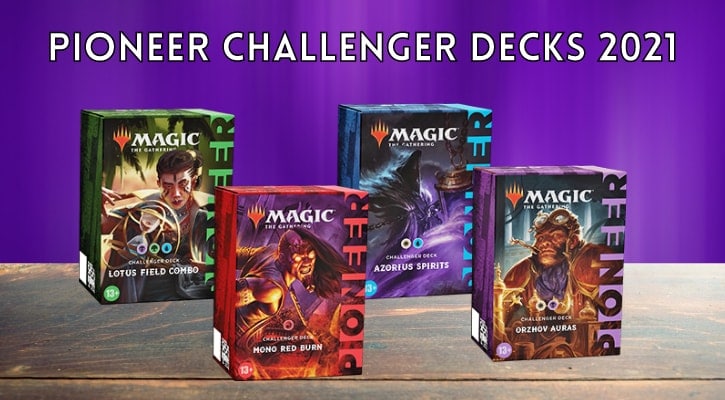 Are you looking to get into Pioneer? Or would you just like a powerful 60-card deck right out of the box? Whichever the case, Pioneer Challenger decks are a great product for you! There are four different versions, each one featuring a different play style. However, what they all have in common is that they are all at least playable in Pioneer.

Let’s take a look at the Pioneer Challenger decklists and find out what each one of them is trying to do.

Want your opponent guessing what you’re trying to do? Do you like flyers? Enjoy casting spells on your opponent’s turn? Azorious Spirits decklist check all these boxes.

A half of this deck is represented by Spirit creatures. Yes, there are exactly 30 Spirits in the deck. The only non-Spirit creature is Brazen Borrower, which is half a spell anyway. The rest of the deck consists of some counterspells and, of course, lands.

Since most of the Spirits have flying, you’ll also notice a small sub-theme around that mechanic, with cards like Empyrean Eagle and Lofty Denial.

All in all, this is a great deck if you like tricky decks, tribal synergies, and tempo plays.

Lotus Field combo is a surprising addition to the Pioneer Challenger decks. First, it’s a combo deck, and Wizards don’t usually like this kind of deck very much, and they don’t often feature them in preconstructed decks. Second, if a key card gets banned, there really isn’t any direction into which to upgrade the deck. Nevertheless, it’s still here, and it’s certainly a viable deck for Pioneer combo enthusiasts.

You might now know the combo in question, as it isn’t the most obvious one out there. If you do, feel free to skip this section.

The key card is, naturally, Lotus Field. Once you have it in play, you can also copy it with Thespian’s Stage. You can then quickly generate absurdly high amounts of mana, thanks to various untap effects you have, like Vizier of Tumbling Sands and Hidden Strings.

What to do with your large amount of mana? You play Granted, and get Omniscience from your sideboard, and you play it. Then you can do all sorts of stuff, and you usually win by casting Peer from the Abyss, targeting your opponent.

If you want oven more in-depth guide to Lotus Field combo synergies, you can check this article by Ari Lax.

What to say about Mono Red Burn, that wasn’t already said? This is the fastest and the most explosive deck out of the four Pioneer Challenger decks.

You can start attacking as early as turn one. You have 16 creatures that cost just one mana, and half of them have haste. The deck also has a bunch of burn spells. Of course, Lightning Bolt isn’t legal in Pioneer, but Wizards’s Lightning does a pretty good impression in the mid to late game.

Amazing deck, if you like quick games, and pointing burn spells to your opponent’s face.

As the name suggests, this deck cares about Auras. There are plenty of cheap ones in the deck, as 16 of them cost just one mana! The only one that’s more expensive is All That Glitters, and it is well worth the cost.

Playing Auras can be risky, but that’s why Sram, Senior Edificer is the key card in the deck. It rewards you for simply casting Aura spells.

You also have various cards that protect your big threat, such as Selfless Savior and Karametra’s Blessing. For even more value, the deck also plays Lurrus the Dream-Den as a companion, which can make it even harder for your opponents to outvalue you.

This is certainly an exciting deck to play.

Here’s some more information about the Pioneer precons. If you still have any questions afterwards, leave a comment below, and we’ll get back to you as soon as possible.

Pioneer Challenger decks release on October 15th, 2021. You can already preorder them on Amazon.

Pioneer is a constructed format. The minimum deck size is 60 cards. Cards have to be from the regular MTG expansions from Return to Ravnica forward. The only exceptions are cards on the Pioneer Ban List.

Which Pioneer Challenger Deck is Best to Buy?

Well, that depends on various criteria. So we’ll split our answer into three options, and you can pick the one that”s most important to you.

For beginners, we’d recommend picking a deck that’s easy to pilot. So here are deck, ordered by how hard they are to play (from easiest to hardest).

Mono Red Burn is pretty straightforward. Get your opponent down to 0 life as fast as possible. So it’s an easy choice for a beginner. If you’d still like something more complex, both Spirits and Auras are fine options.

However, if you’re new, you probably don’t want to start playing with Lotus Field Combo, as the deck is quite convoluted.

All decks have quite similar value, so you won’t be missing much if you buy any one of these over the other. However, if you order them by overall value of the cards (as of August 25th, 2021), from best to worst you would get something like this:

Besides each deck’s name, we also wrote the most sought-after cards from it.

Well, there isn’t a ranking here, since the fun is very subjective. If you want an aggressive deck, go with Mono Red Burn. If you want to play combo, Lotus Field is the obvious choice.

If you’re looking for something in between, you can pick either of the other two decks. If you prefer tribal decks, go for Spirits, otherwise you can pick up Auras.

Maybe you really like all of them. In that case, you can get a bundle of all four Pioneer Challenger decks. You can use them as a self-contained Magic game and battle them against one another, as they should be fairly well-balanced. This way, you don’t even need to worry about upgrading them or keeping them up-to-date with the metagame.

That’s all about Pioneer Challenger decks 2021. Which one is your favorite? Let us know in the comments below. You can also expect upgrade articles for each of the four decks here, so make sure to check back again soon. If you don’t want to miss it, you can follow us on Facebook.

If you’ll be buying a new deck, you might want to get a new deck box and sleeves. For a deck box we’d recommend Ultimate Guards’ Sidewinder (check price), and for sleeves Dragon Shield (check price) is the way to go. You can also find our browse our articles about the best MTG deck boxes and best sleeves.

Anyway, that all for today. Have fun, and many wins with your Pioneer Challenger Deck!