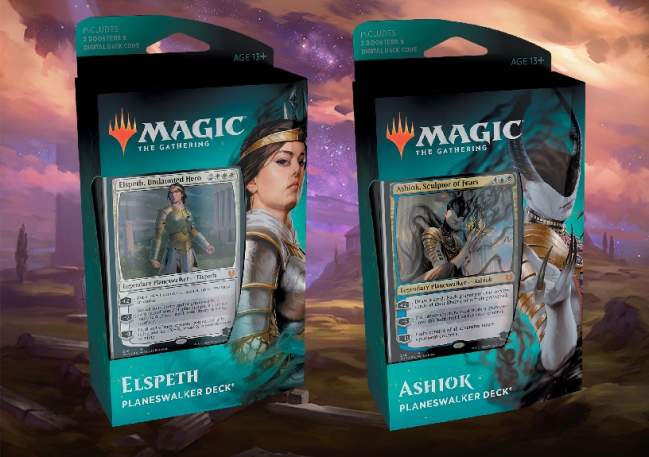 There are two Planeswalker Decks this time around. One is build around Elspeth, Undaunted Hero and the second around Ashiok, Sculptor of Fears. We’ll take a look at each decklist, and possible upgrades for both of them.

UPDATE: If you’re looking for the newest decks, check our Planeswalker Deck Guide for Core 2021.

Each Planeswalker Deck from Theros Beyond Death contains:

Each deck contains a Planeswalker, and a special version of an uncommon – Daxos or Tymaret:

You can order your decks on Amazon.

Planeswalker Decks are a product for beginners and therefore pretty weak. They are perfectly fine to play against one another, but you’ll have a hard time winning against anything else.

However, they are built this way so you can easily improve them. Today, we’ll help you with that.

We won’t give you a specific list of which cards to swap. Getting all of the specific cards could be hard for a beginner. It also removes creativity from deck building. Instead we’ll highlight the major themes for each deck and how to build towards them. We won’t use any expensive cards, so this upgrade will be budget friendly.

So let’s get right to it!

Go wide is Magic slang for strategies with lots of small creatures. This deck definitely wants to be like this, with cards like Phalanx Tactics, Hero of the Winds and Elspeth, Undaunted Hero buffing your team.

Devotion to white is a mechanic that cares about how many white symbols your permanents have. More symbols you have, bigger bonus you’ll get.

There are only two cards that support devotion sub-theme here: Daxos, Blessed by the Sun and Daybreak Chimera, but it can be upgraded, if that’s something you’d like.

If you want to go for a devotion theme, you should definitely include Reverent Hoplite. It’s the best payoff we currently have for mono white devotion. Idea is to play bunch of random creatures, then cast Reverent Hoplite and get a ton of tokens. Next turn we attack with our army and use Phalanx Tactics for the win.

However, we would more recommend to go all in on a go-wide strategy. The crucial thing missing are one drops. Thankfully, you got two pretty cool ones in Theros Beyond Death – Pious Wayfarer and Alseid of Life’s Bounty. You want four of each. They work nicely with one another.

Another card you might want to add now is Omen of the Sun God. It provides two body for mass pump effects and it triggers Pious Wayfarer.

To support heroic theme, add Hero of the Pride. Now you’ll also want two more copies of Phalanx Tactics – this card is really great in this type of deck.

If you’re looking for a cards from older sets – both Faerie Godmother and Giant Killer provide a new dimension to the deck.

If you added the cards we suggested, you’ll have around 10-18 additional cards. Now you want to get rid of the same amount of cards, that you end up with a 60-card deck again.

You should probably get rid of some of the more expensive cards like:

You can also cut Leonin of the Last Pride. Yes, it’s cheap, but it’s pretty weak.

Besides all this, you should also remove all three Dreadful Apathy and a single Indomitable Will for Banishing Light, a more versatile removal spell.

When you’re done, you should check, if you have at least:

What you’ll end up with will be a pretty aggressive white deck, with lower curve than before. It will probably run more smoothly and win more games. It’s still far from Tier 1, but it should at least hold its own and the upgrades were all pretty cheap.

Mill is an unofficial name for mechanic that puts cards from a library in the graveyard. If you’re doing it to yourself, it’s called self-mill. The name is derived from an old Magic card, Mill Stone, which used to be a win condition, back in the early nineties.

Anyways, in the present, Ashiok deck includes a total of 12 cards that mill you and/or your opponent.

Along with self-mill come the graveyard synergies. Usually, when the cards go to the graveyard, you forget about them. Don’t do this with this deck, though. Following cards care about your graveyard:

That’s quite a lot of them. However, most of them are pretty weak. But don’t worry – everything can be fixed with some upgrades.

While the Elspeth deck was pretty straightforward, this one’s all over the place. We must warn you, that this deck (even with after upgrades) won’t be spectacular. However, it will have a more clear plan and this will help you win more games.

Our main plan is most well represented in Devourer of Memory. We want some self-mill and we want to attack. Now that we know what we want to do, we can build our deck with that in mind. First thing you should do, though, is to get two more Devourers and play a full playset (4 copies) of it.

Best card from previous sets for this archetype is certainly Syr Conrad, the Grim. He comes with a wall of text. Let’s break it down – he will deal 1 damage to your opponent whenever:

He also has an ability that will help you trigger him, for just two mana! It also works nicely with Devourer of Memory, allowing you to trigger it multiple times in a turn. Devourer will easily attack as a 5/4 unblockable with Konrad’s help.

Two more cards that we like alongside him are Merfolk Secretkeeper and Forever Young. Secretkeeper will fill your graveyard and provide you with a blocker, while Forever Young enables some quick wins with Konrad.

The first cards you should remove are the most clunky ones – cards that cost too much or don’t fit the general strategy of the deck. Our recommendations would be:

You still need some removal spells, but Final Death, just won’t do. Card is good in draft, but not in constructed Magic. Ideal card for the removal slot would be Murderous Rider. But since it’s quite pricey, you can get Drag to the Underworld or maybe Eat to Extinction.

First, you don’t want to be playing Unknown Shores. It’s so bad you are better off with a basic Island or Swamp.

But given that you are playing a two color deck, you need some dual lands. Optimal lands would be four copies of Watery Grave and Temple of Deceit. Watery Grave is pretty pricey, buy Temple is a more budget friendly option (check price on Amazon). Nevertheless, if you’re looking for the cheapest option you can use Dismal Backwater.

Now that we’re playing multiple copies of Konrad, we want to have at least 25 lands, so we can cast him on turn five.

If you would like to want to mill your opponents out, there’s a whole other deck you should build. You know, when you remove all of their cards and they have to draw a card, but can’t – they lose the game.

You could try a deck with 30 Persistent Petitioners, some cheap card draw and that’s it. This would be a whole another deck, but it’s pretty cheap – you can try it if that’s the strategy you like. This deck however, is currently better suited for self-mill.

When you’re done check if you have at least:

We don’t claim that the your deck is now broken and will start winning tournaments left and right, but it’s certainly better then before. It has a focus and it looks really fun to play.

All in all, these deck are fine if you’re just starting out. With a couple of upgrades we suggested, you’ll be able to win more for a very small cost.

Eventually, you’ll want to build decks on your own. Don’t forget to read our 9 Tips for Deck Building, so you’ll build the best deck possible. If you’re just starting out with Magic, check our Best Buys for MTG Beginners.

That’s the end of our Planeswalker Deck Guide for Theros Beyond Death. Until next time, may you win a lot of games with Ashiok or Elspeth.