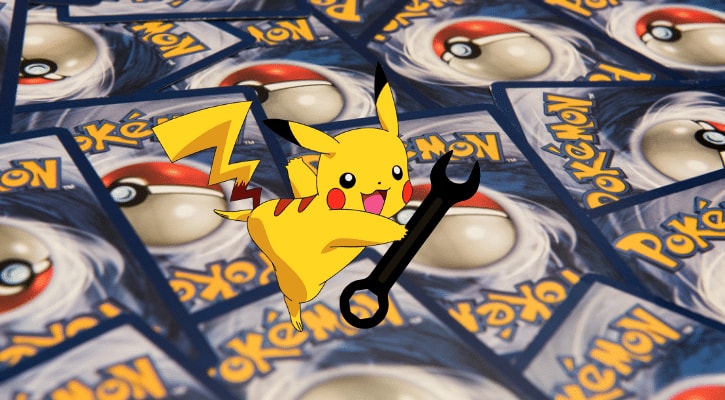 Do you want to learn how to build your own Pokemon decks? That’s great, because you’ll find some great tips in this Pokemon Deck Building Guide. This way, you’ll be able to win games with your very own deck.

There are numerous ways to beat your opponent during a match. It is crucial to understand the different ways to win and to know which way best suits your play style.

If you enjoy being an aggressive opponent, build your deck with the purpose of getting knock outs as efficiently as possible.

Or maybe you want to force your opponent to draw all of their cards before reaching their 6th prize card. If so, it would be best to have cards that will stall the game causing your opponent to deck out giving you the win.

There is a style for every player. It is important to choose whatever style you have the most fun playing with and to use cards based off of the style you choose.

After you’ve chosen a style you’d like your deck to be , it’s time for the fun part… Choosing which Pokemon you want to play.

If you have some personal favorite Pokemon you want to see in action, start with those and get familiar with how they play. Keep in mind the style you have planned for your deck. If you think your favorite Pokemon doesn’t fit that style, then it would be best to drop it from your current deck list.

For example, you’re trying to build a control deck and you’re intrigued by the Blastoise-GX card from Unbroken Bonds. It would be best to save that Pokemon for an aggressive deck you might build some other time. Heavy hitting Pokemon can be useful in a control deck. But, a card like Blastoise-GX needs to have a lot built around it and would take your focus off of controlling your opponent.

Understanding how each Pokémon you choose operates will help you build your deck as efficiently as possible.

Although type advantage is very relevant in PTCG, it is not useful to have a large number of different types in your deck. A common misconception to new deck builders, is assuming you need an array of different typed Pokemon to counter your opponent.

A good deck does not attempt to exploit type advantages. Doing so causes your different typed Pokemon needing an assortment of different energies to attack. Having more than 2 (sometimes 3) different colored energy makes your deck clunky. This can keep you from drawing the energy you need during that turn.

Instead, you should be aware of your Pokemon’s weaknesses and decide if you want to add cards to protect them from their disadvantages.

Deciding if you should add cards to protect your Pokemon from weaknesses depends on two main things.

Keep the types of your attacking Pokemon as consistent as possible. If you’re playing a Pokemon solely for their abilities, it is more than ok to add them to your deck. Even if it’s the 3rd or 4th different typed Pokemon. Since you won’t be attacking with them, you won’t need to add an energy of their type to your deck.

3.  Use Pokemon for Additional Support

Next step in this Pokemon Deck Building Guide is making sure to use your Pokemon to their full potential. What makes a Pokemon useful can go beyond just their attacks. There are many different Pokemon with abilities that can be a huge help during your turn.

Dedenne-GX is an example of a supporter Pokemon. When first placing it on your bench, It’s Dedechange ability gives you the option to discard your current hand and draw 6 cards. Doing so will give 6 fresh new cards from your deck to work with. This can be extremely helpful when your current hand offers no help during your current turn.

Along with Dedenne-GX, there are many more Pokemon that can offer support in drawing more cards, attaching more than 1 energy per turn, and disrupting your opponent.

There are aspects every deck should have no matter what style deck it is. Among those aspects is a draw engine and an energy engine.

You can often be stuck with a hand that will not help you in your current situation. If you have a draw, you’ll be able to draw more cards to get out of a bad situation.

You can implement a draw engine by adding the correct Pokemon or supporters to your deck.

There are a number of basic and evolution Pokemon with abilities that will allow you to draw more cards. Each one has it’s pros and cons depending on the deck.

If you have time to set up during a match, go with Pokemon that will give you extra draws every turn (typically evolution Pokemon). If you prefer an early game set up, use basic Pokemon that give you easily accessible draws.

Trainer cards also offer extra draws through supporter and item cards. Supporters can typically give you more cards to draw than an item card. With the 1 supporter per turn rule, draw engines do best with implementing both supporters and item cards.

Because Pokemon occupy space on your bench, some decks do best running a draw engine solely through trainer cards. A healthy mix between Pokemon, supporter cards, and item cards is what typically works best for draw engines.

Every deck is unique. Test it out and decide which engine runs best in your deck.

As you should know by now, you are allowed to attach only one energy to a single Pokemon per turn. But, there are Pokemon and trainer cards that allow you to attach multiple energies per turn.

Implementing an engine that accelerates energy attachments can be extremely helpful… Especially if you are playing Pokemon with high attack costs.

Some cards that are meant to accelerate energy, are unique to each colored energy. For example, the Welder supporter allows you to attach 2 fire energy to 1 of your Pokemon from your hand.

However, cards like Turbo patch, allow you to attach any single basic energy from your discard pile to a non GX basic Pokemon. With that said, the “correct” energy engine you decide to implement, will very much depend on what type of energy you are playing.

There are a lot of Pokemon that offer energy acceleration as well. Just like the trainer cards, they can be limited to a specific type of energy.

Although most decks can benefit from having an energy engine, some can do better without one. For example, if the highest attack cost in your deck is 2 total energy, you might be better off just attaching energy by hand.

Energy engines are very relevant in PTCG. It’s important you know your deck well so you may decide if you need to implement one or not.

5.  Play the Correct Amount of Each Card

In Pokemon TCG, you must have exactly 60 cards in your deck, with a max of 4 copies of a card with the same name (except for basic energy cards). Having the correct amount of copies of cards will increase your chances of drawing your most important cards when you need them.

Below are things to keep in mind during your Pokemon deck building – when you’re deciding how many copies of a card to play. Remember your plan for your deck and base the number of cards that will fulfill that plan most efficiently.

If you’re playing cards that fit any of these descriptions, you should play only one copy of them.

The following type of cards usually come in pairs:

The following type of cards come in threes:

You’ll want a full playset if you’re playing any of these:

After you’ve completed building your new deck, be willing to tweak it as needed. All good decks require many adjustments to run the best it possibly can.

Through play and testing, you might start to notice things not working as you had planned it to. Don’t instantly give up on the build. Make thorough adjustments and be patient.

Weaknesses in your build can easily be missed while self evaluating. Don’t be hesitant to ask your peers for feedback.

We wish you good luck as you journey into deck building in Pokemon TCG. Have fun and always stay motivated to be a better player. If you have any questions, feel free to leave a comment below.

When you’re building a new deck, you might want to get new sleeves as well. Here’s some suggestions for the best Pokemon card sleeves. If you’re looking for more Pokemon articles, you might enjoy some of the following: