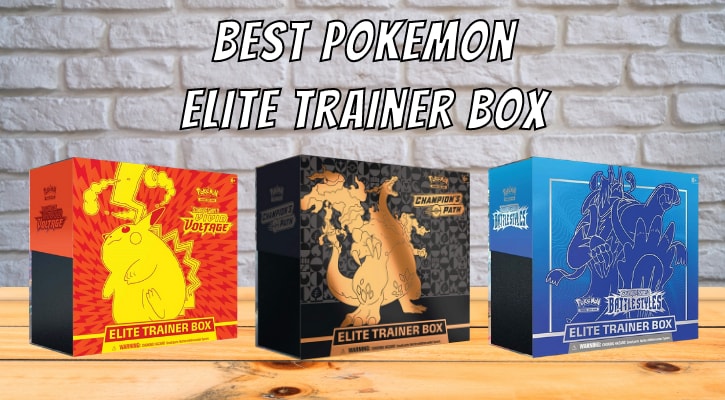 There are so many Elite Trainer Boxes, that it can be hard to decide which one to get. Don’t worry – as we’re here to help you pick the right one for you.

Of course, there isn’t just one perfect Pokemon Elite Trainer Box, which would be the best for everyone. That’s why we’ll offer you multiple suggestions, based on different criteria – like the newest one, the cheapest one, the best overall, etc. This way, you’ll easily decide which one to get.

If you’re in a hurry, here’s a recap of the best three Trainer Boxes.

What is a Pokemon Elite Trainer Box?

Before we start, let’s take a look at what a Pokemon Elite Trainer Box is. If you’re a more experienced player, feel free to skip this section.

It’s a cheaper alternative to a Pokemon Booster Box. While on average you do get less boosters per dollar spent with the Trainer Box, that’s balanced by the fact that you get a lot of extras. Even the box itself has a nice design, and can be used as a storage for cards.

Anyways, let’s take a look at what you’ll get in your average Elite Trainer Box:

Here’s most of the things one could find in an average Elite Trainer Box. (Items pictured are from the Vivid Voltage Trainer Box.)

As we mentioned, every Box comes with a special code that can be redeemed in the Pokemon TCG Online. So what does the code get you? Usually, you’ll get:

Besides that, most recent boosters also come with a code that redeems for a single booster in the online game. So if your Elite Trainer Box contains 8 boosters, you’ll also be able to get 8 boosters of the same set in the Pokemon TCG Online.

You might want to know when the next one releases. That would be Brilliant Stars Elite Trainer Box, which will launch on February 25, 2021.

Anyway, back to the one that’s actually released — Fusion Strike box has a very cool look, depicting the always popular Mew, which has been around since the first Pokemon generation.

The purple-pink combination looks quite nice. Sure, not everyone will like this particular ones, but they’ll still protect Pokemon cards just fine.

If you’re looking for the best Elite Trainer Box, look no further. This is the one.

Why is that? Because, not only do you get everything you’d expect to get from a Trainer Box, you also get a promo card. Just look at this beauty:

So if you want a guaranteed Charizard, this is a great product for you. On top of that, this box contains 10 Champion’s Path boosters, which is two more than most Elite Trainer Boxes.

The sleeves, also depict a Charizard. The combination of orange and black looks really awesome on this one.

All in all, you get a great promo card, more boosters then most Trainer Boxes and the whole design is focused on Charizard, one of the most popular Pokemons of all time. Plus it’s quite recent.

That’s why Champion’s Path Elite Trainer Box is the best one to get.

Another great Elite Trainer box is the Shining Fates one. It also has ten boosters, from the set that’s only available in special products like this. (They aren’t available in regular booster boxes.)

Every box also comes with a promo card — a very cute Eevee VMAX.

So you get 10 total boosters and a guaranteed promo card, which makes Shining Fates an amazing Elite Trainer Box to buy.

Eevee is also featured on the sleeves:

Design is pretty cool, and it’s a flavor win when you use these sleeves for a deck that has some Eevee cards plus various evolutions of the card.

As always, the newest Pokemon expansion is often among the best ones to get. Vivid Voltage was recently released, and this box contains 8 Vivid Voltage booster packs.

Fans of Pikachu will love this box, as the cute electric mouse is in the front and center. If you’re lucky you might even open a Pikachu V or Pikachu VMAX. Both of them are powerful and cute.

The iconic Pikachu is also featured on the sleeves you get in the Vivid Voltage Trainer Box.

Every Pokemon player will love the design of these sleeves. There’s no reason they wouldn’t. Pikachu is almost certainly the most popular Pokemon, and this artwork is really nice.

If you’re looking for a cheaper option, Battle Styles is one of the more budget friendly Elite Trainer Boxes. It contains all the stuff that your average box has, including 8 Battle Styles booster packs.

Battle Styles box has a very slick look, and if blue isn’t your color, you can also get the red version. The blue one corresponds to the Rapid Strike faction, while the red one is paired with Single Strike.

This doesn’t mean that you’ll only get cards from one specific faction. You get 8 Battle Styles booster packs, which can contain cards from both factions plus some unaffiliated ones.

The sleeves aren’t one of our favorite ones, as the art does look a bit uninteresting and a bit crowded – especially compared to some other ones. However, they’ll still protect the cards fine enough.

One last note — when buying the Battle Styles Elite Trainer Box, carefully read what the listing says. There are different ones — some sellers are offering boxes on random, some both, and some have specific ones.

Of course, the design is subjective. Something that looks great to one person, might not be anything special to someone else. However, we think that the design of Cosmic Eclipse Trainer Box really stands out. Even the dice look pretty slick!

The sleeves, depict Arceus, Dialga and Palkia, the same as the box itself.

So if you’re looking for a box that’s a bit different in design, you might like this one.

If you’d like to get a cool guaranteed promo card, this box definitely delivers. Each Hidden Fates Elite Trainer Box contains a Moltres & Zapdos & Articuno GX promo card. The artwork is made in a stained-glass fashion and it’s absolutely breathtaking.

On top of that this box also contains 10 Hidden Fates booster packs, which is, as we mentioned, on a higher end for Elite Trainer Boxes.

Moltres, Zapdos and Articuno are the main Pokemon for this box, and they are, naturally, featured on the sleeves as well. The legendary birds really stand out on the black background.

If you like the legendary Pokemon birds, this might be a great box for you. While we’re speaking of legendary birds, there’s one more box that we should mention.

First things first, this box is not one of the newer ones. It was released back in 2017, so it’s probably not a great option for a tournament player. However, if you’re just playing casually with friends and family, you might like this one – especially, if you’re Ho-Oh fan.

You can probably guess the reason for that – each Shining Legends contains – a never before seen Shining Ho-Oh promo. Of course, as the name suggest it’s in foil, so the card actually shines.

This box also contains the full ten Shining Legends booster packs. Who know, you might even get a Mewtwo GX or Shining Mew, both of which are great cards for collectors.

The design is both simple and elegant. A deck sleeved in these sleeves will look pretty dope.

That’s just some of our favorite Pokemon Elite Trainer Boxes. To quickly recap, our favorite one is definitely the Champion’s Path Box (get it here), which features the mighty Charizard.

Anyways, which is your favorite one? Should we mention one that we didn’t? Let us know about it in the comments below.

If you’re looking for more articles about Pokemon cards, you can check the following ones:

Until next time, have fun with your new Box and may the boosters contain that one Secret Rare you really want.