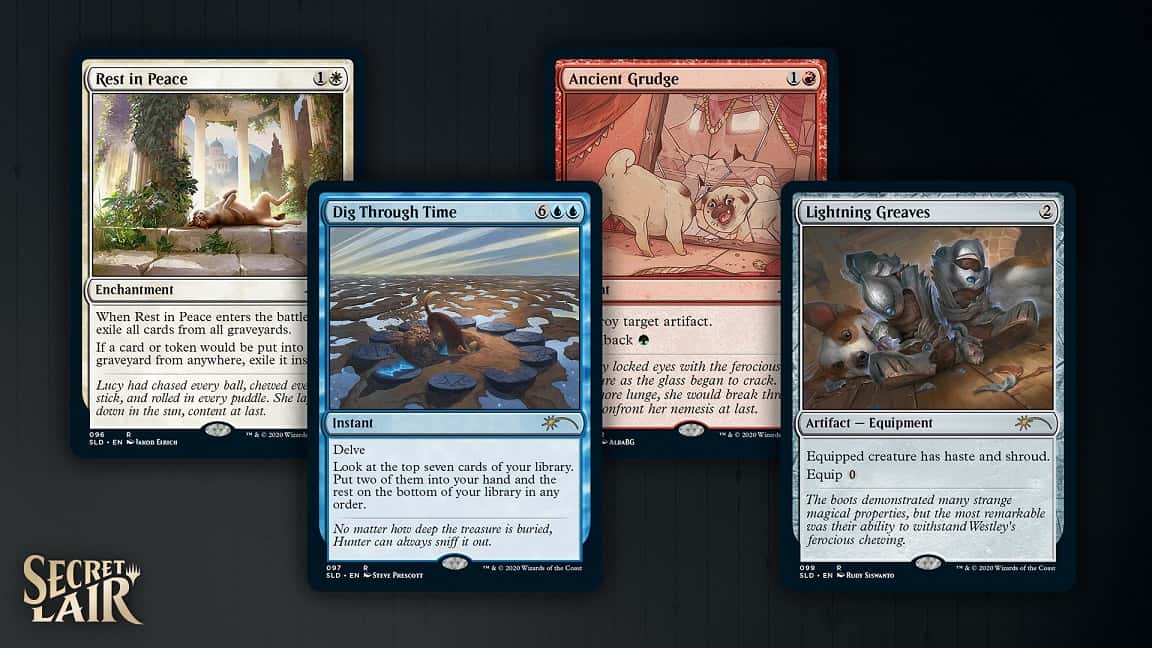 Wizards of the Coast just announced their new product in the Secret Lair Series: Every Dog Has Its Day. It contains four different cards all featuring a dog theme – both in art and in flavor text. We’ll take a closer look at them and discuss their playability.

Rest in Peace is mostly a sideboard card in Modern and Pioneer. Some players also include it in their Commander decks, if they want to mess up with their opponents’ graveyard strategies.

This version shows a content and happy Lucy. Even though the flavor text could be interpreted otherwise, Lucy is still very much alive, as confirmed by official Secret Lair Twitter account.

Flavor text: Lucy had chased every ball, chewed every stick, and rolled in every puddle. She lay down in the sun, content at last.

Dig Through Time is a very powerful card, which you can easily cast for two mana. It’s so strong that it’s restricted in Vintage, and banned in Legacy and Modern, the three most powerful formats in Magic.

Nevertheless, you can still play the card in Commander. Dig Through Time sees a lot of play there, especially with commanders that let you copy it – like Taigam, Ojutai Master and Naru Meha, Master Wizard. The card also a staple Pioneer.

The version from Secret Lair: Dogs, depicts a very good boy, digging for a treasure.

Flavor Text: No matter how deep the treasure is buried, Hunter can always sniff it out.

Ancient Grudge is a fine sideboard card, played in formats like Vintage, Modern and Pauper. Some red-green Commander decks also include it, as mana rocks and powerful artifacts are quite prevalent there.

The art is pretty funny, as Shelby has been apparently holding a grudge over her own reflection for a very long time.

Flavor text: Shelby locked eyes with the ferocious creature as the glass began to crack. With one more lunge, she would break through and confront her nemesis at last.

Finally, here’s a card that will make all Commander players happy – it’s Lightning Greaves! It’s one of the most played cards in that format, granting two very important abilities to one of your creatures.

The art from Secret Lair: Dogs is also pretty sweet. This magical boots can survive even the attacks of one ferocious puppy.

Flavor text: The boots demonstrated many strange magical properties, but the most remarkable was their ability to withstand Westley’s ferocious chewing.

Even if you won’t manage to get the Secret Lair, you can still get the Arena Sleeve. Maybe by paying attention to Daily Deals. But this can be quite a long way, as sleeves like this appear only once in a while.

The other option is to buy the code online. You can check Gray Viking Games – they have a large selection of different Secret Lair codes for Arena. Once this code becomes available, you can find it there.

This Secret Lair is titled Every Dog Has Its Day. Why is that?

Because the only time these are available for sale is August 26th, 2020, which is the National Dog Day in America. You can buy it on Secret Lair Store from Wizards of the Coast.

One final interesting tidbit – the artwork was inspired by the dogs of Wizards’ employees. How cute is that?

That’s all about the dogs version of Secret Lair. Tell us your favorite card from this series in the comments below.

Until next time, have fun and keep living the pug life.