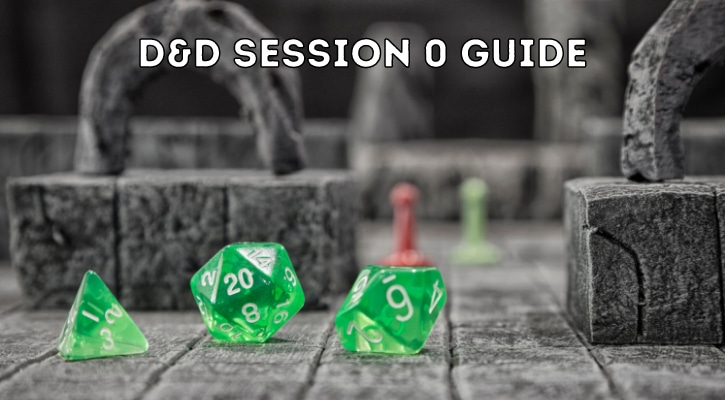 One of the most important parts of a strong D&D game begins before you start to play. Session 0, named so because it occurs before your first game of a campaign, is a time when you can set expectations for the group, clarify your intentions, and get to know one another.

This article will describe a variety of suggestions for organizing and running your session 0. While it’s primarily angled towards DMs, it might be useful for players to know what questions might be helpful to ask during session 0.

The first thing you should do in a session 0 is set the scene—of the setting, the campaign, and the mood. This information allows players to quickly decide if this is the type of game they’re interested in and clarifies their expectations and vision of the game moving forward.

Players should know where the game will take place—whether it’s in the Forgotten Realms, Eberron, or a homebrew setting. The setting is perhaps the most important thing to discuss first because it colors the rest of the game: is it the semi-generic, high-fantasy world of Faerûn, the gritty spacefaring realm of Spelljammer, or the gritty Dark Sun setting?

If your players are familiar with the setting, that may be all you need to do, but for newer players you should go into more detail. Describe the world, the people, the geography, the mood, and any other notable facts, such as:

The setting of a game sets the tone for everything that is to follow. Go into as much detail as you’d like, though try not to overload the players with information—think about it like a map. You don’t want to see every little label, every tiny bend in the road, every shift of elevation. You want landmarks to guide players through the different features of your game.

Your characters also need to know how they fit into the specific campaign you’re going to play. You should provide them with a snippet of what is to come. No spoilers about the story, but there should be enough information about the immediate area coupled with plot hooks to engage the players and allow them to tie in their characters. Here are a few examples of a few things you might include in your introduction:

You should encourage your players to use this information to start thinking about their character backgrounds. By the time they build characters, they should be able to formulate a general idea of how their characters are connected. Both to the story, and to one another.

The campaign description should also give them an idea of what kind of character would fit into the world and story you’re developing. For example, a player might think twice about playing a dragonborn in a campaign where the kingdom in which it is set is in the middle of a war against dragon-kind.

The mood of a game is another critical piece of information players should know before a game begins. It will heavily influence not only how players play the game, but how they experience the story.

Make your expectations clear here. Are you looking to play an emotional, roleplay-heavy game like Critical Role? Or perhaps a goofy, Acquisitions Incorporated-esque one? When talking about the mood of your game, you should discuss the following topics:

You should be clear about what you want from your game. Not to be a strict DM, but to give your players an honest and accurate description of the game to come. While narrative surprises are welcome, it’s always helpful for players to understand the type of game they’re getting into.

Now that the more narrative and thematic topics are out of the way, it’s important to talk about the more “legal” side of the game. That’s your expectations for player behavior, and any changes to the rules of the system.

Starting with a series of ground rules is important because it sets your expectations early on. These ground rules are general, setting-agnostic requests for how your players behave at the table, in and out of the game.

Though you may consider some things obvious, it’s never bad to restate that you won’t tolerate racist, sexist, homophobic, and any other generally discriminatory comments or actions. Here are some other things you might want to consider bringing up with your group:

D&D is a game, and it’s easy to overlook these things during session 0. But especially when it comes to new players, it may be hard for them to be comfortable during a game, or they may not be familiar with your expectations.

Even with veteran D&D players, ground rules vary between playgroups. It’s never a bad thing to go over these expectations with your group, but you can always tailor it to fit your players.

Separate from ground rules are house rules. These are specifically changes made to the official rules and mechanics of the system. If you alter anything from official books, it’s a good idea to go over those changes with your players, as that will influence the characters they may want to play, the spells they choose, and the actions they take.

Personally, I have a compendium of house rules I apply at the table. Most of them are small, often inconsequential changes. While I don’t ask my players to read through the whole thing, I go over the most important ones and make the resource available for anyone who wants to review it. Here are some common house rules you may want to apply in your games:

House rules are entirely up to you and your playgroup, and what you feel comfortable with. However, it’s important to be transparent and consistent with your rulings. Thus, it’s a good idea to write down your house rules for your players’ access.

There are other resources for guides on character building, but here are some things you should discuss with the group before you begin:

Character building should be an active and engaging process for both the players and the DM. Work with the players and help them build a character that slots well into your world and game. The character is the foundation upon which their D&D experience will be constructed, so it’s important to make sure it will be enjoyable for the player to play.

Similarly, backstory should be a multi-directional, engaged process. Help your players build a backstory that is immersed and engaged with the world you’re playing in. There are 3 main factors that are some of the most critical for building a good backstory:

With these 3 factors, you ensure characters are justified in being present at the beginning of the game, and can change and grow throughout the campaign. Thus, characters remain dynamic and interesting throughout and never get boring or lackluster.

Lastly—and closely tied to backstory—you should encourage the characters to form relationships with one another. This adds to the group’s cohesion and makes them care about one another, as well as motivate them to continue moving forward.

You can write these into the characters’ backstories, onto an index card, or simply verbalize them. Each character should have some kind of relationship with at least two other members of the party, but ideally everyone.

With these tips, you should be able to run a meaningful, productive session 0, and be well on your way to starting your D&D campaign. There is one last thing you should know, though—session 0 is about your game and your table. Adapt it to suit whatever needs you have.

And, most importantly, make it a two-way street—field questions from your players about their expectations and what they’re looking from the game. While you’re the DM, D&D is a cooperative storytelling game at its heart, and everyone should work towards ensuring everyone else has a good experience, too. Be flexible and willing to make compromises such that everyone gets what they want and has a good time.

Whether this is your first campaign or your 100th, good luck on your next session 0, and use it to greatly enhance the strength of your game!

For more D&D information, you can check the following articles: