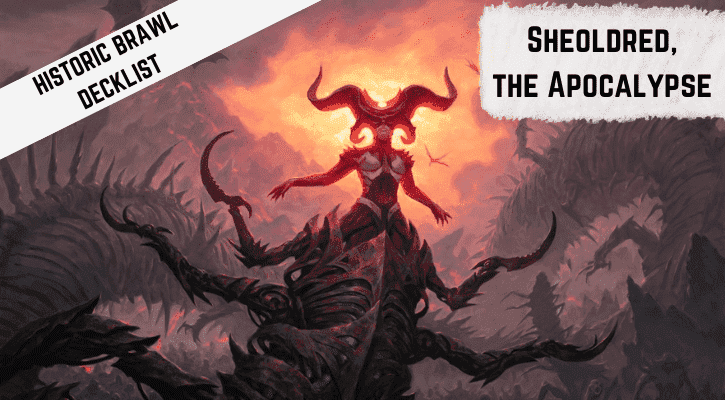 Usually when we’re talking about exciting commanders, we’re talking about the multicolored ones. However, Sheoldrerd, the Apocalypse begs to differ. While the design is very clear and simple, it enables many sweet combos. How many can you find in the following Sheoldred Historic Brawl decklist:

Sheoldred, the Apocalypse certainly enables some interesting interactions in Historic Brawl. I certainly don’t think that I used all of them, as this was just the very first draft of the deck. If I missed anything, let me know in the comments. But first, I’ll talk about some of my card choices.

You’ll notice that there’s a bunch of card draw in the deck. That makes sense, as Sheoldred rewards you for doing so. Of course, there are also cards that can force the opponent into drawing, like Sign in Blood and Blood Pact.

There are the big draw spells, like Cut of the Profits, Eldritch Pact, and Peer into the Abbys, all of which can be quite handy.

Of course, you have your regular Black stuff, like Bolas’s Citadel in your deck, which can certainly feel quite combo-ish. However, that’ll work with just about any Black deck.

So one thing that Sheoldred enables is life gain / life loss synergies. Vito, Thorn of the Dusk Rose and Exquisite Blood are a well known two card combo, that each work nicely with Sheoldred on their own.

But none of that is what my favorite combo in the deck is. What I really want to do with this deck is to have Sheoldred, the Apocalypse and Lich’s Mastery in play and either draw a card, or gain a life. Both things will force you to draw the whole deck, but you won’t die thanks to Mastery. With the whole deck in your hands, there will probably be something you could do to win the game.

Don’t forget to play Reliquary Tower, so you won’t have to discard at the end of the turn.

It looks like that’s the end of my first article for Card Game Base. If you’d like to see me tackle another Historic Brawl commander, let me know in the comments. See ya!