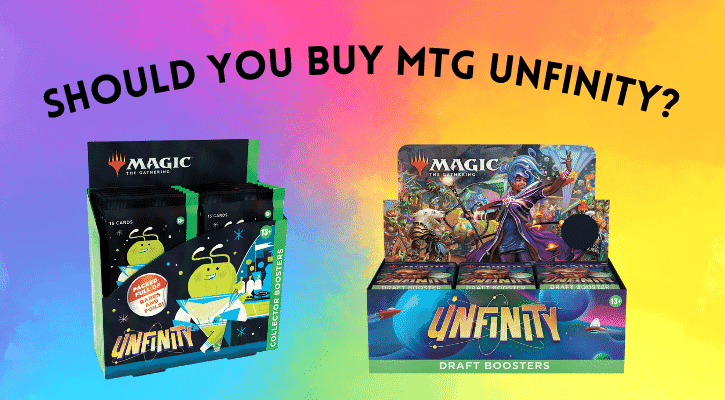 MTG Unfinity is quite an unusual Magic the Gathering set. That’s why many players are unsure whether they should or shouldn’t buy Unifinty boosters. There isn’t one answer that would be right for every type of player. But fear not – in this article, we’ll help you figure out whether you specifically should buy MTG Unfinity.

Unfinity is the newest Un-set. These are wacky sets that use fun mechanics – some of which that wouldn’t quite work in regular Magic. Even the cards that do work, like The Space Family Goblinson, that you see below, have funny names and artworks, which are quite unusual for Magic.

The set is draftable and in black border, although not every card is legal in every eternal format. You can find the cards and learn more about the Unfinity set, in our MTG Unfinity Guide.

As we mentioned before, not every player will benefit from buying Unfinity boosters. With that in mind, we split this section into different types of players. This way you’ll have an easier way of deciding whether to buy Unfinity boosters or no.

Are you a very competitive player? In that case, Unfinity probably isn’t for you. The set is made, for drafting, which is different from some of the early sets, however, the main component is still to have fun doing weird combos.

The set also won’t be legal in Standard, Pioneer, and Modern. These are the three main Constructed formats, as far as tournament play goes.

Unfinity drafts usually pull a casual crowd, so if you’re just trying to draft as efficiently as possible, while others are just messing around, it probably isn’t the best experience for anyone. You’ll probably crush the opposition, but they came to play with entirely different goals, so it won’t be very satisfying.

So, if you’re on the fence whether you should try this set or not, we’d recommend you that you do. Besides, you’ll often be able to recoup some value, as there are valuable cards in the set – but more about this in the next section.

However, there’s been an abundance of full-art lands lately, and they aren’t as sought-after as they used to be. Thankfully, Wizards predicted that, and they put 10 Space shock lands in the set.

But that’s not all! The big twist that’s coming to this set is that some cards are going to be legal in eternal formats. The eternal formats are Legacy, and Vintage, but most importantly – Commander! This means that there are going to be actual playable cards in the set, and some of them will be worth something.

As you can see, this is a big difference from the other Un-sets, which for the most part only had full art basics and perhaps a couple of cards that were worth money. Therefore, Unfinity looks much better set for collectors. It’s also the first Un-set that comes with Collectors boosters.

The important thing to note is that some Unfinity cards will be playable in Commander. This naturally makes Unfinity boosters a better buy for fans of the format, as they can open a card that they’ll actually use in the future.

If you enjoy drafting, you might want to give Unfinity a try. Sure, it isn’t your regular draft set, but it was still made with draft in mind. So, if you’re looking for a fresh environment, while the next set releases, this could certainly be a fun one.

However, if you don’t like the unusual game play, and prefer the traditional way to draft and play Magic, this set isn’t a great buy for you.

Should You Buy MTG Unfinity? – Recap

Before we wrap up, here are some pointers to quickly recap whather you should or should purchase Unfinity boosters.

You shouldn’t buy Unfinity, if you:

You should buy Unfinity, if you:

Hopefully, this article helped you figure out whether you should buy MTG Unfinity or no. If you have any questions, or remarks about it, please, leave a comment below. Don’t forget that we covered a lot of Unfinity related stuff in the Unfinity Guide.

Until next time, have fun, and enjoy playing with Unfinity cards (or whichever other cards you prefer).