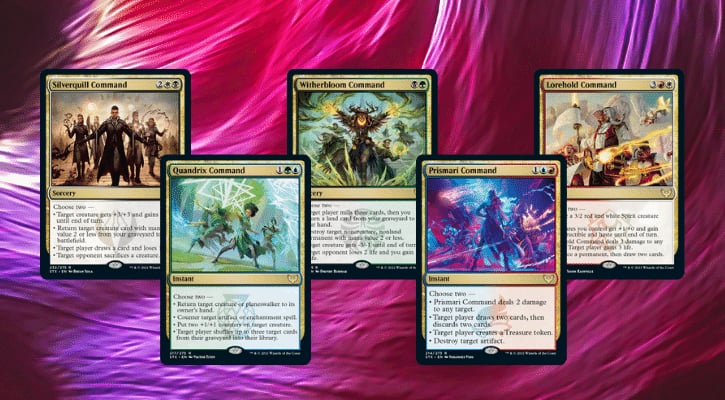 Strixhaven spoilers have started of with a bang – five new cards were previewed, and they complete the cycle of two-color Commands, first printed in Dragons of Tarkir. Each card represents a specific collage from the Strixhaven university. So today we’ll take a look at the Strixhaven Commands.

Commands are cards that offer you four different options and you get to pick two of them. The flexibility they provide is a very big deal. Even though some options might seem weak, when you get the best two out of four, you get really powerful cards.

First up, it’s the red-white command, of the Lorehold Collage. It comes with four quite powerful options:

The biggest downside of this card is that it cost five mana. At four, it would be at least playable in Standard, but five is really asking you a lot.

Two modes are exactly the same:

All in all, we can expect this card to see a lot of play, not only in Standard, but maybe even in the eternal formats. The key here is the cheap cost of only three mana.

Next is another Command that costs just two mana, it’s Quandrix Command, which allows you to:

All modes can be incredibly useful, so you can expect this Command to see plenty of play, at least in Standard. Even the last mode, which might look somewhat mediocre, can often come in handy, when playing against graveyard-based decks. Get that Kroxa, Titan of Death’s Hunger out of there.

This is the cheapest of the Strixhaven Commands. Is it any good? Let’s see, you can:

All in all there’s some absurd value here, for the low cost of two mana. You can probably get a two-for-one out of this card pretty easily. This card might be even better in eternal formats, since they have a bunch of cheap artifacts running around.

The last of Strixhaven Commands costs four mana, which can be a bit much, but has some nice effects. You can:

Silverquill Command, is still strong, but the four mana is a high price to pay in the current Standard environment, even for such a powerful card. We shall see how playable it is – maybe it’ll shine once the powerful cards from Throne of Eldraine rotate out?

As we talked about the rest of the cycle before, we should probably at least mention the old Commands. All five of them are listed here:

Which of the Strixhaven Commands is your favorite one? Let us know in the comments below.

If you want to try and open some Commands, you can already preorder Strixhaven on Amazon.

If you’re looking for more information about this new set, you can find Strixhaven spoilers here.

Until next time, have fun and may you always make the correct choice with your Strixhaven Commands.