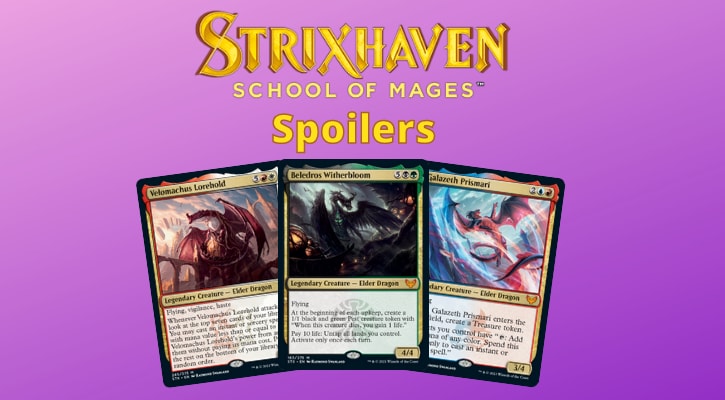 Looking for Strixhaven spoilers and information? If so, you’ve come to the right place. Here we’ll talk about everything we know about Strixhaven so far, including spoilers, speculations and predictions, as well as some lore stuff.

UPDATE: If you’re looking for the newest spoilers, you can find Crimson Vow spoilers here.

There will also be some special cards in the boosters, which aren’t technically in the set. They are called Mystical Archives and are a collection of some of the most powerful instants and sorceries from Magic’s history. You can find Mystical Archives cards here.

Strixhaven has four types of boosters:

Three of them are also available as a part of a booster box. You can find more information about different types of boosters in our Booster Pack Guide.

This are your regular booster packs, which have been around since for ever. As the name suggests, they are best for drafting.

Set Boosters are a relatively new product. While they are a bit pricier than Draft boosters, they do have more exciting contents. Great for players who just want to open some packs, get some cool cards, but don’t want to spend too much.

Collector Boosters are the most expensive of the bunch, but they do contain a ton of rares, both in foil and alternate arts. You can even get the Japanese alternate art Mystical Archive cards.

You can find all the details about Strixhaven Collector Booster contents here.

Strixhaven is also bringing us five powerful Commander decks, one for each house.

Strixhaven is the most elite magical university in the Multiverse (MTG universe with all planes).

It consists of five colleges, each with its own takes on magic. There is some sort of rivalry present between those colleges and they are battling with one another.

Mark Heggen, Product Architect at Wizards of the Coast stated (in the announcement video), that it’s unlike anything Wizards have done before. That means we can expect a pretty exciting set.

When we first heard about Strixhaven early in 2021, we made some predictions. You can take a look at them and see how many we got right and how many were blunders.

Kasmina is the leader of a secret Order of Planeswalkers, a cabal with mysterious goals. She is currently recruiting so-called embers – planeswalkers, whose sparks hadn’t ignite yet. She puts them through traumatic events, until they get to their full potential. Afterwards, she recruits them to the Order.

So, where better to get a bunch of recruits than at the most elite school for Wizards in the Multiverse? Besides, Kasmina’s only planeswalker card (so far) makes Wizards tokens and her title is Enigmatic Mentor – maybe she’s a part-time teacher at Strixhaven?

Do you remember Godzilla Magic cards from Ikoria? Those were pretty well received, which can’t be said for the Walking Dead Secret Lair.

Those two products show us that Wizards are open to various collaborations, when appropriate. Maybe we can expect Wizards to team up with Harry Potter franchise, since this set is basically Magic the Gathering meets Harry Potter.

If there is going to be a collaboration, we might see something similar to the Godzilla cards. That’s regular Magic cards, with alternate art and names from the HP universe.

Nevertheless, there’s no actual confirmation that something like this could happen. That’s why our confidence level is pretty low with this one.

Let’s talk about which creature types we can expect on Strixhaven. First one is a free roll, and it makes sure that we get at least one prediction correct.

Second creature type prediction might be a bit less obvious, but still a pretty safe one to make.

If we split the name into two parts we get strix and haven. So, it’s basically a refuge for owls, right? Besides, wizards and witches are often depicted with owls as their companions.

Oh, plus the set symbol depicts an owl, so that would be pretty weird if we didn’t get one in the set.

Finally, let’s check some important dates for Strixhaven. Note, that all the dates are currently unconfirmed. However, based on the previous set releases, these are pretty likely.

If you’re looking for more MTG articles, maybe some of these might be interesting to you:

Until next time, have fun, and good luck with your Strixhaven packs.