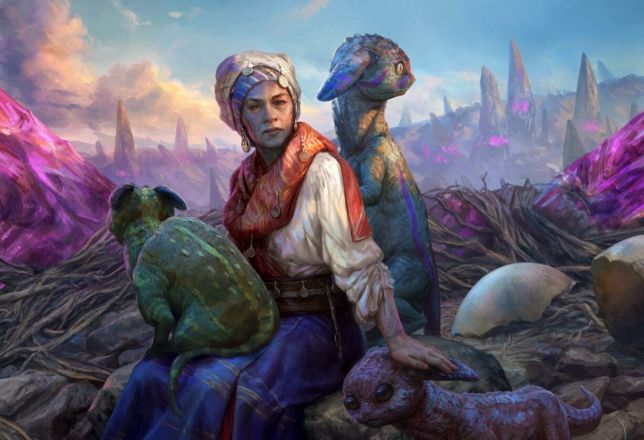 Do you want to make your new Gavi, Nest Warden deck better? This Timeless Wisdom upgrade article will help you do just that. We’ll take a look at which cards you want to add and which to remove, so you’ll win more games.

Even if you’re just browsing to decide which deck from Commander 2020 you want, this will help you see how this deck can evolve with some upgrades. If you want one you can order Timeless Wisdom on Amazon.

But first, let’s check the decklist.

We won’t tell you the exact decklist you should build. That takes half of the fun out of Commander and it’s sometimes hard to follow. Instead we’ll provide some card ideas; synergistic ones, powerful ones and – last but not least – lands that will make your deck run smoother.

The deck is designed to be pretty fair, but you can do some real broken stuff with Gavi’s cost reduction mechanic. The most notable being the both Decrees that are missing.

Firstly, Decree of Silence is a zero mana counterspell, that draws you a card – as long as you have Gavi in play. As such it’s a great way to protect your Commander from any harm.

Second option is even stronger. Decree of Annihilation will destroy all lands and you get to draw a card for zero mana! So once you get a bit ahead, just cycle the red Decree and you be in great shape to win the game. Although, other players might not be very happy with the way you did it.

Gavi’s second ability also works well with cycling. You cycle in your main phase, you draw your second card for the turn and you make a Dinosaur Cat. However, it’s not triggered only by cycling – you can use it with any card draw spell.

You should use cards like Brainstorm so you’ll be able to create tokens on your opponents’ turn. Rhystic Study also works, while just being a good card on its own.

Some cards are just too powerful not to play. Even though they don’t necessarily have much synergy with Gavi, they will easily make your deck better.

Cyclonic Rift is one such card, it’s been a staple in blue decks in Commander and for a good reason, Cast in for 7 mana and it’ll get you from any trouble you might find yourself in. It often just wins you the game of the spot.

Another good Timeless Wisdom upgrade should be to add a counterspell or two to your deck. Mana Crypt would be perfect, but it’s also quite pricey (you can check the price on Amazon). You can also use much cheaper Counterspell or you might find one that you like in our Top 10 Counterspells article.

Here are some other cards that could be pretty powerful, depending on your build. Keep in mind that you still want enough room for your cycling cards.

You’ll need to fix your mana base in order for you deck to run smoothly. Especially since you’re running three colors.

Here are some great (not too expensive) dual lands that you can add to your deck:

It can sometimes be hard to decide which cards to remove, particularly if your a new player. Here are some suggestions on what to cut. However, if you want to play one of those cards, by all means – do so. Commander is all about having fun and playing cards you like.

First things first, we should probably warn you that Akim is a pretty weak commander. For five mana you get a weak body and its big bonus is to… make a 1/1 flyer each turn and give them double strike for six mana? Yikes – this is all pretty bad for a three-color Commander.

However, if you like the bird dinosaur, you can certainly play it and make it better. And if you’re play group isn’t full of try-hard players, you can make perfectly fine Akim deck.

If you want to build a regular deck around it, you can refer to the Good Stuff section from above. However, in this upgrade we’ll take a look at how to start building a bird tribal deck around it.

So for bird tribal we need two things. First, bird token makers – which obviously work well with Akim. Second, payoffs – cards that care about birds. Now again, they won’t be very strong, but that’s what you sing up for with Akim deck. At least, it will be a pretty dope deck.

That’s it for starters, you can surely find plenty of other bird related cards, with some smart searches on Scryfall. However if you want the best Timeless Wisdom upgrade, it’s probably best that you stick with Gavi.

That’s it. You’ve reached the end of Timeless Wisdom upgrade article. Do you think we missed some good card that should definitely be in the Gavi’s or Akim’s deck? That’s entirely possible, given how many Magic cards exist. So share your suggestions in the comments bellow!

Don’t want to miss another interesting Magic article? Give us a follow on Facebook or Instagram. We’ll provide Magic spoilers, news, articles and memes. Come and join us we’ll be happy to have you.

Until next time, may you create a clowder of dinosaur cats with Gavi, Nest Tender.