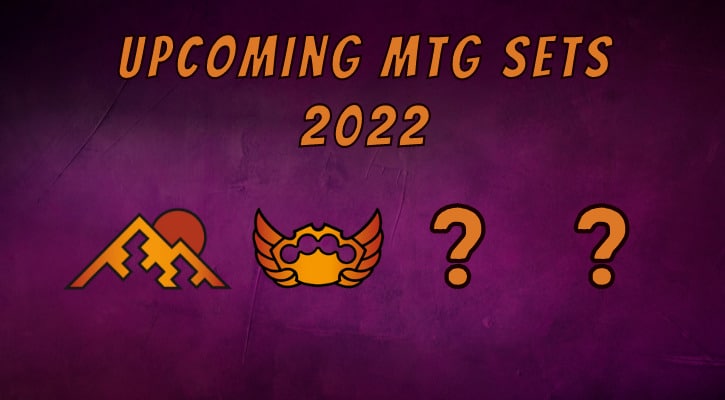 Looking forward to upcoming MTG sets? That’s great, because here’s all the information you’ll need. We’ll take a look at all Standard and supplemental sets that are coming out in 2022. (Plus, we also know about one set that’s coming out in 2023!)

There are four main sets that are releasing in 2022:

As you can see two of these were already released, while more information about the second two will be available on May 12, 2022.

New Capena is a modern fantasy noir set. There are five families, each centered in three colors. Each family has its own mechanic, and different species appear in different families.

Angels build the city of Capena, but during our visit it’s already run by Demon crime families. The plane also has a special meaning to Elspeth.

The second return set in 2022 takes us to Dominaria, a popular old school Magic plane. In fact, it was the Magic’s plane at the beginning of the game. So it makes sense, that it is a celebration of the 30th anniversary of the game. It’ll talk about the history of Dominaria.

So, two brothers are apparently fighting a war. Who? Well, no other than Urza and Mishra! These are two insanely powerful characters from Magic’s past. This set will be a bit different from others – at least flavor wise, as it’s describing an event, rather than a world. Furthermore, it’s an event happening in the past of the Magic’s lore, so that’s something new as well.

One of the interesting things about The Brothers War is that the set will further explore some of the underrepresented tribes from the early era of MTG.

Various collaboration products were also announced, as part of the Universes Beyond. You can expect:

In 2022, we’re also getting at least two big supplemental sets.

First one is the fourth Un-set. That’s a weird joke set with Silver border cards. It’s called Unfinity. The set will contain shock lands with artwork set in space. You can find all MTG Unfinity information here.

Furthermore, you can take a look at Battle for Baldur’s Gate spoilers here.

That’s all upcoming MTG sets that we know about so far. Once we get more information, you’ll be able to find it right here. If you don’t want to miss it, make sure to give us a follow on Facebook or Instagram.