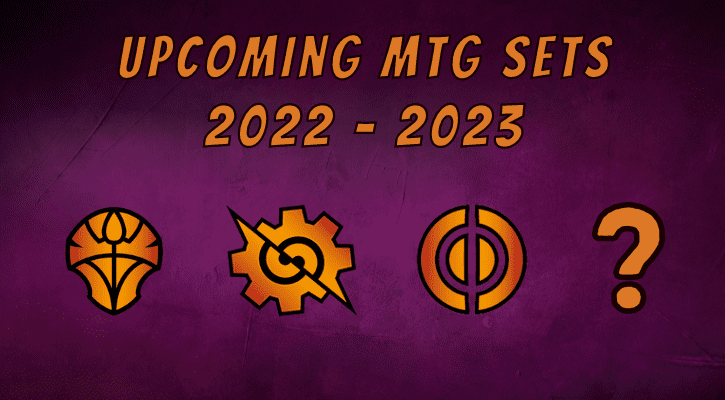 Looking forward to upcoming MTG sets? That’s great, because here’s all the information you’ll need. We’ll take a look at all Standard and supplemental sets that are coming out in 2023. (At least the ones that we know about currently.)

Let’s take a look at the Standard sets first. These are the regular sets, and there’s going to be four of them in 2023.

Phyrexia: All Will Be One

This set continues the storyline, which started in Dominaria United, and continued in the Brothers’ War. We’re going to Phyrexia!

In this set, we’ll be explore the New Phyrexia, where the Praetor Elesh Norn rules. She is sure that there’s nothing stopping her vision, especially not on the Phyrexian’s home plane. It’s very likely that this set will showcase a big win for the bad guys, before the climax in the next set.

March of the Machine

So, this set wraps the Phyrexian story with a big finale. Will it be the end of Phyrexians once and for all? We’ll have to wait a while longer before we find out.

The set will be followed by the March of the Machine: Aftermath, a special set in which we’ll see what the world looks like after this epic battle, which will fundamentally change the fabric of the Multiverse.

After a bunch of sets focused on the Phyrexian conflict, we’re getting a break from all that, as we return to the fairy-tale world of Eldraine.

With the first Eldraine set, most of the focus was on the Realm part of the Eldraine. This time around, we’ll go into the Wilds, which is bound to be more dangerous, but hopefully also even more exciting.

We’ll probably also get some of the missing references about fairy-tales, and hopefully no planeswalkers as broken as Oko, Thief of Crowns.

The Lost Caverns of Ixalan

The fourth Standard set of 2023 is another return. We’re going to explore Ixalan, once again. However, it’s changed since The Immortal Sun is no longer there.

Similarly to the Eldraine set, we’ll also explore a new locations. Previously we’ve seen the sea and land of Ixalan, but this time we’ll go deeper, and see what lurks beneath the surface.

Nevertheless, we can still expect the tribes of Ixalan (Dinousaurs, Merfolk, Pirates, and Vampires), as they all have their fans.

A set that features card from various Magic sets that were happening on Dominaria. This set will be draftable. The first card that was shown from this set was the iconic Force of Will.

Universes Beyond will start strong in 2023, with Lord of the Rings Magic set. While it won’t be Standard legal, it will be legal in Modern! It’ll feature the full booster lineup, and it’ll also come to Arena. There will be four Commander decks, and Secret Lairs too.

That’s all upcoming MTG sets that we know about so far. Once we get more information, you’ll be able to find it right here. If you don’t want to miss it, make sure to follow us on Facebook or Instagram.