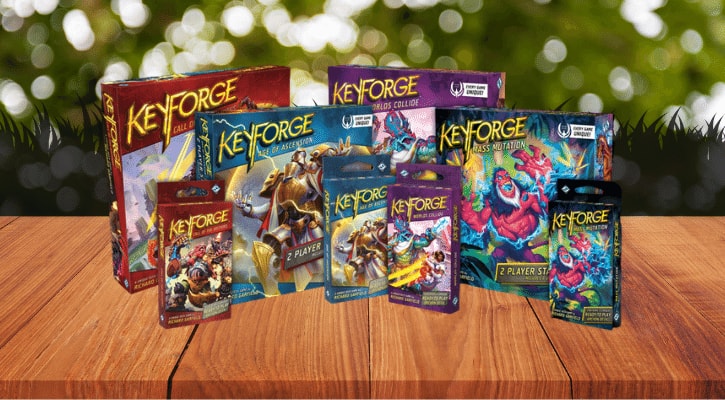 Would you like to start playing Keyforge but you don’t know which Keyforge set to buy? Worry not, as I’ll show you the pros and cons of each one. This way, you’ll be able get the perfect Keyforge set for you.

Since it’s release, three more Keyforge sets have come out. (There’s also an additional one is coming in February 2021.) All sets have their merits, and you could get a good or bad deck in each one. Decks from different sets play just as well against each other.

If you’re in a hurry here’s a quick recap of the best ones:

Want to know more about all of them? Here’s a deeper look at each set in order of release:

Call of the Archons – Best For Beginners

As the first set, Call of the Archons features fast and simple gameplay. This makes it an excellent starting point for new players.

Decks from this set feature the big, swingy turns that Keyforge is known for. However, more experienced players looking for harder decks to play might prefer a later set.

Call of the Archons: Starter Set

The starter kit from this set is different from the others. It contains two official Call of the Archons decks and two starter decks, which are exactly the same in every set. As such, these starter decks are the only Keyforge decks you can buy that aren’t tournament legal.

However, if you don’t care about the tournaments, this product is great for beginners. You get a total of four decks, plus all the keys and tokens two players need to play. There’s no need to buy anything else, unless you want to spice up the game play later on.

Starter sets from other kits contain two randomly generated decks from the respective set plus tokens and keys. They don’t have two additional starter decks.

Age of Ascension is usually considered the least powerful of the sets. A lot of cards from the set focus more on attrition and board presence than the aember rush of the first set.

Nevertheless, it has a cult following among players that prefer its grindy, complex board states, that focus more on incremental advantage. If you don’t like the notion that reaping is usually better than fighting, this set is for you.

Worlds Collide introduced two new houses, Star Alliance and Saurian, and rotated out Sanctum and Mars. It’s the set with the highest individual card power, with the two new houses being quite pushed.

Ward acts like a bubble shield, preventing the warded creature from being damaged or destroyed and instead popping the ward.

Exalt is the Saurian mechanic where you put aember on your own creatures in exchange for powerful effects, but if that creature is removed from play, the aember goes to your opponent.

If those sound cool, go with this set, but I wouldn’t recommend it to a beginner.

The most recent set, Mass Mutation, takes positive elements from previous sets and introduces the Enhance mechanic. It grants printed bonus effects to other cards in the deck. It’s a fun mechanic that shows just how much space there is for Keyforge to try new things.

If you’re an experienced player in other card or strategy games and don’t mind a little bit of extra rules to pick up – I’d definitely recommend Mass Mutation.

Dark Tidings is the upcoming Keyforge set. Due to the pandemic, its released date was moved several times. We can now expect it during February or March 2021.

This set will rotate out the Dis house, and bring a brand new house called Unfathomable. If you’re a more experienced Keyforge player, and are looking forward to the next set, you can certainly preorder this one.

That’s it for today. Hopefully, this guide has helped you figure which Keyforge set to buy. If you think there’s more to be said about a certain set, you can leave a comment below.

Have fun with your new Keyfore deck! It’s an amazing game to play. You can find more about it in this Keyforge Guide.