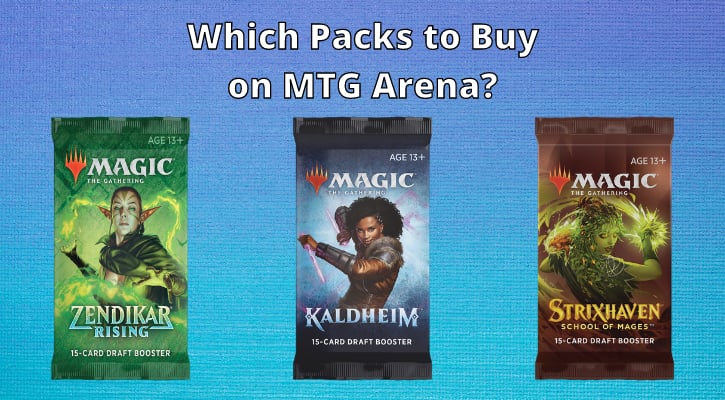 Everybody loves opening packs. But there are so many of them, so which packs should you buy on MTG Arena? We’ll give you an answer alongside with some other information about packs on Arena.

As with many questions of that sort, the answer is – “It depends.”

To be more exact – it depends on three things:

Let’s talk about all of them and how they affect which packs you should buy. Afterwards, we’ll provide our rankings of packs – from best to buy to worst to buy.

Once a year, the Standard Rotation happens. Half of Standard legal sets rotates out. Cards from this sets can only be played in Historic afterwards. Most players don’t even tip their toes into Historic. Even if you do, there are so many Historic cards, that most of your Standard stuff won’t be good enough.

Therefore, it’s very important which packs will stay legal in Standard. You can read all about Standard Rotation here. Here’s what’s rotating out in September 2021:

These sets are hence worse than the others by default. Other sets are staying in Standard until September 2022.

So, the closer we get to the Standard rotation, the worse the rotating sets become – keep that in mind when buying packs on MTG Arena. As we’re currently quite close to the rotation, we’d suggest to stay away from the four sets we mentioned above.

The only exception might be Throne of Eldraine, which contains a ton of powerful Standard (and Historic) cards. Speaking of playables…

Another very important factor when picking the best pack on MTG Arena is how many playable cards the set has. With playable cards we mean cards that show up in the top tier decks.

The Best: Zendikar Rising and Throne of Eldraine

The best set in this regard is – by far – Throne of Eldraine. That set’s power level is insane. From its release, six Eldraine cards were banned in Standard. You’d think that the set wouldn’t contain any more powerful cards, but no – more Eldraine cards rose to the top of the format. Some of the most played card currently in Standard are:

Besides all that, Eldraine also has some of the best lands – Fabled Passage is a staple in multicolored decks. All of the castle lands (Castle Embereth for example) are constantly showing up in the best preforming builds. Truly, if you look at the best decks, almost half of the cards is still from Eldraine.

Zendikar Rising also contains a ton of great staples. There are plenty modal double-faced cards, that see play in a lot of decks (like Shatterskull Smashing or Clearwater Pathway). These lands are bound to see a lot of Standard play, even after the rotation. The set also has some cool non-land cards, for example, Dimir Rogues contain a ton of cards from Zendikar Rising.

Kaldheim, Theros Beyond Death and Ikoria: Lair of Behemoths follow Eldraine by amount of playables. Those three sets, certainly introduced plenty of powerful cards to Standard.

Kaldheim has various powerful cards from rares like Showdown of the Skalds and Toski, Bearer of Secrets to mythic rares like Goldspan Dragon, Valki, God of Lies and Alrund’s Epiphany. All in all, it contains plenty of powerful cards, including four Pathway duals, which will always come in handy. Once the Eldraine card rotate out, Kaldheim might even be Tier 1 by the number of playables.

Theros has a variety of different strong cards. From Temple lands (like Temple of Deceit) to single powerful cards like Elspeth Conquers Death. Even some commons like Omen of the Sea appear in various different decks.

Ikoria has the companions (like Yorion, Sky Nomad), cards that completely changed the landscape of Standard format. You usually just need one of them, but there are other powerful cards to open in Ikoria, something like Shark Typhoon for example. If you want to see more strong cards from that set, check best cards to craft from Ikoria.

The jury’s still out on Forgotten Realms, but currently it looks like it might have just enough strong cards to remain above the next section. The cycle of rare creature lands might be quite playable in Standard, if not before, at least after the Rotation.

Strixhaven has many fun cards, but not that many powerful ones. Note that this might change after the rotation, but currently we aren’t impressed with what Strixhaven has to offer. You’d only want to purchase these packs on Arena, if you’re playing Historic and want Mystical Archive cards.

Core Set 2021 has the least amount of playables. You’re better off just crafting the cards that you need, than opening Core 2021 booster packs.

This is the one factor we can’t include in our rankings, since we don’t know what your collection is like. However, we can give some advice on how to take it into account.

It’s actually quite simple. Take a look at how many good cards are you actually missing from a specific set. If you have most of them, don’t bother opening any more packs of that set.

You can use a similar approach if you want to build a specific deck. Look at which cards you’re missing for a specific deck, and figure if they’re mostly from a specific set. If they are, simply buy packs from that set.

So with all that in mind, here are our final rankings, from the best packs to the worst ones:

Standard rotation was the most important factor here, as we’re so close to it. Top half consists of the sets that won’t rotate out in September 2021.

Throne of Eldraine has a lot of playable cards, although they’ll rotate out in September 2021. That’s why both Forgotten Realms and Strixhaven are ahead of it. Even if these two don’t have that much powerful cards currently, everything might change after rotation, since it looks like we’ll get a Standard format with a lower power level.

Can You Buy Arena Packs Outside the Game?

While you can’t directly buy as many Arena Packs as you’d want, you can buy six packs per set. How by getting a Prerelease Kit.

Each paper Prerelease Kit comes with 6 booster packs, one promo card and a code, which redeems for 6 packs of the respective set on MTG Arena.

You can buy a prerelease pack on Amazon, and you’ll get the code plus actual booster packs in paper as well.

What if you aren’t playing in paper? In that case, you can buy just the code from Gray Viking Games. That’s a reliable store, that offers all kinds of MTG Arena codes. You can redeem them for Prerelease Packs, or for Secret Lair Sleeves, and much more.

REMINDER: You can only redeem only one prerelease code for a specific set per account. This means you can redeem Both Kaldheim and Ikoria code to get 6 Ikoria and 6 Kaldheim packs, but you can’t redeem two Kaldheim codes to get 12 Kaldheim packs.

Can You Buy Older Packs on Arena?

Yes, you can. However, we wouldn’t recommend it. There isn’t a single set that really stands out by the amount of playable Historic cards. So you’d be better off just crafting the cards you need.

How Many Cards Are in the MTGA Pack?

There are two different versions of packs in Arena. Regular packs and Draft packs.

These are the packs you open under the Packs tab, and buy in the Store.

Each card can be replaced by a wildcard of the same rarity. You can’t get two or more copies of the same card in one pack.

Draft packs are packs that you open in draft or sealed. They are mostly the same as booster packs in paper.

You can’t get two or more copies of the same card in one pack.

How Much Do MTG Arena Packs Cost?

You can buy them in bundles with Gems.

As you can see, you don’t actually save any Gems when buying multiple packs. You are always paying 200 Gems per pack.

Most packs offer a promo that’s only available as a buy-a-box promo, or by crafting. However, form Zendikar Rising forward, you get a card that’s available in the main set, but you do get an alternate style for the card.

Is it Better to Buy Packs or to Draft?

You would think that it depends on your win rate. It does, but only somewhat. The better you are, the more profitable the draft is. But do you really need to be that good?

Let’s do some math. We’ll propose that you value a Regular Pack at 200 Gems, and Draft Pack at 150 Gems (since it isn’t duplicate protected, etc.). You pay 750 Gems as an entry fee (5000 Gold also works). You will get at least one Regular Pack as a reward with a chance of a second one. Let’s see how it works out with a Quick Draft.

So you will be better off playing Quick Draft – unless you lose three games without winning at least one. If you enjoy drafting, this is a no-brainer. You should never buy packs and only play Draft to get cards.

Draft is a really fun format for us. If you need some help with it – here’s our latest Kaldheim Draft Guide.

On the other side, if you just don’t like Draft, or if you want a specific booster, which isn’t available for drafting, you can still just buy your packs and be fine with it. Another benefit of doing so is getting your wildcards faster. The reason for this is explained here.

That would conclude everything about packs on MTG Arena. If you have any more questions, feel free to ask us in the comments bellow or on our Facebook / Instagram page.

Since you’re an Arena player make sure to check our Complete List of Arena Codes for free boosters and card styles.

Until next time, may you open all the cards you wish for in your packs.

4 thoughts on “Which Packs to Buy on MTG Arena”