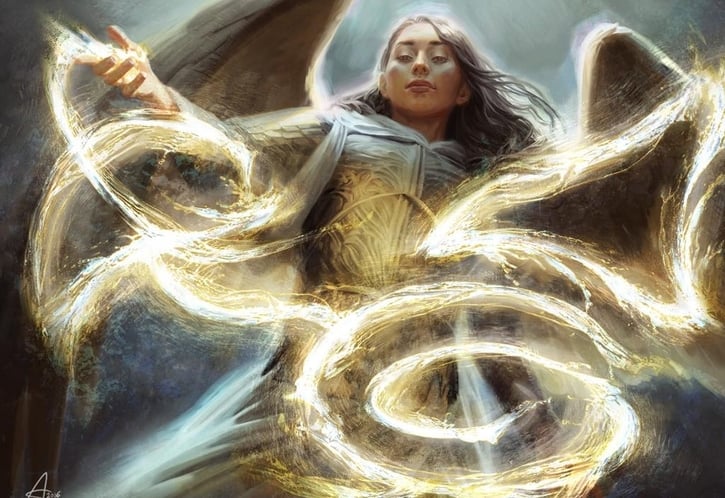 Here’s a quick overview of the best white Commander staples. The list is by no means a definitive one, but it includes most of the best white cards in my opinion. Each one of these cards has generic utility. This means they show up in a lot of white decks.

For a full list of the most commonly played white cards in Commander, check out Edhrec’s Top White Cards page.

White creatures are typically known for being “weenies”. Unfortunately, weenies are hard to win games of Commander with. This is why the most commonly played white creatures in Commander have function beyond being cheap and aggressive.

These are more or less two of a kind. However, they represent a group of creatures that protect each other.

Are creatures that ramp in white. Very few cards have effects like this, which makes these very powerful for this color.

These two are both types of card advantage in white. Like the last group, these are valuable cards because their abilities are relatively uncommon in the color.

This card has proven itself to be a very powerful white creature. It functions as a white Overrun or better, which can end games. Not to mention, there are combo capabilities with dozens of other cards.

White is known for having the best suite of removal spells. These are most often found on instants.

These are probably the best spells for removing mainly creatures in the whole game. No other color can do these same things with the same efficiency.

These two are a different kind of instant. They can protect your creatures etc. from board wipes or other threats.

Most white tutors can only get artifacts or enchantments. Enlightened Tutor happens to be the most efficient of these effects.

Almost every single white sorcery that could be considered a staple is a board wipe. There are a very small few that make a bunch of tokens are reanimate artifacts and enchantments.

One thing that white has a pretty good variety of is enchantments. There are some that expand white’s removal suite, like Oblivion Ring and Banishing Light. Smothering Tithe is an enchantment that ramps white decks considerably. Cathars’ Crusade and Anointed Procession are both great for token decks, which white has quite a few of. White is also full of Ghostly Prison effects to slow down your opponents’ attacks.

Not many white planeswalkers are very impactful in Commander. However, Elspeth, Sun’s Champion does a little bit of everything. She makes a considerable amount of tokens, wipes large boards, and pumps all of your creatures.

White is a color that could mostly get away with running Plains for its mana base. There are a couple non-basic lands that many white decks might consider. Here are some of them:

And if you want to read up on how to use fewer staples in your decks, check out this article: