Skip to content
Home → Info Base → Wizards of the Coast Bans Uro, Titan of Nature’s Wrath 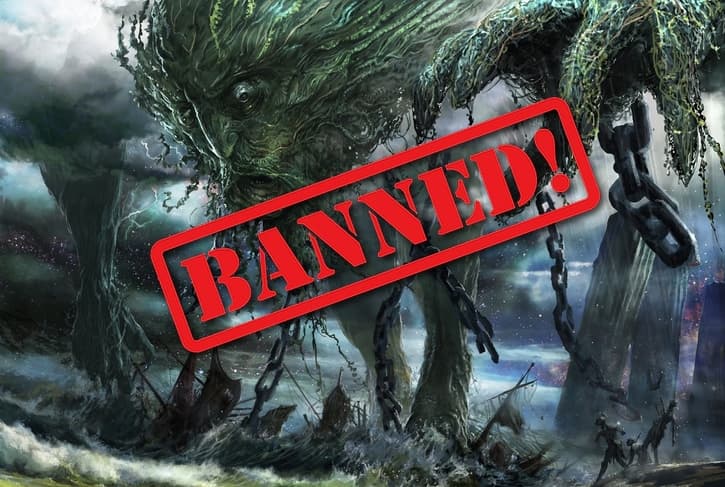 Wizards of the Coast announced one of the quickest bans in history of Magic the Gathering, on Monday, September 28th. Four color Omnath, Locus of Creation decks had an insane win rate, even when players were trying to beat it.

Wizards were forced to act quickly, trying to create the healthier Standard with the Uro, Titan of Nature’s Wrath ban.

The following cards were banned in Standard on September 28th, 2020:

If you’re playing on Arena, you’ll receive one mythic wildcard per each Uro in your collection (before the announcement).

Reasons for the Uro Ban

MTG developer and a member of the Play Design Team, Ian Duke explained the reasoning behind the Uro ban. Here’s a quick recap:

They will still be watching the deck and the metagame in general to see how the things will develop, so more bans are possible in the future.

You can find the full announcement here.

Which Decks to Play After Uro Ban?

We recently compiled 20 new fun Zendikar Rising decklists. Most of them don’t contain Uro, so check them out – you might find a cool new deck.

Some cool examples are:

If you’re just tired of Standard and all the bannings, there’s always the draft format to enjoy. Zendikar Rising is one of the more fun formats we had recently. If you want to win, make sure to check our Zendikar Rising Draft Guide.

So will the Uro ban save Standard and provide a healthier meta game? It probably won’t hurt. However, the 4 color ramp decks might still be very strong nevertheless.

Thankfully, some decks like Rogue Tribal, already had a fighting chance (although a pretty small one) against the deck. One problem was their focus on milling – they often milled Uro, which was a card advantage for the opponent. Additionally, it could exile 5 cards from the grave and ruin plenty of Rogue synergies. Now that it’s gone we might see more counter-play available for decks like this one.

So what do you think? Is this ban enough to make Standard healthier? Share your opinion in the comments below.

Until next time, have fun and good luck with brewing new decks in the slightly fresher Zendikar Rising Standard.

1 thought on “Wizards of the Coast Bans Uro, Titan of Nature’s Wrath”