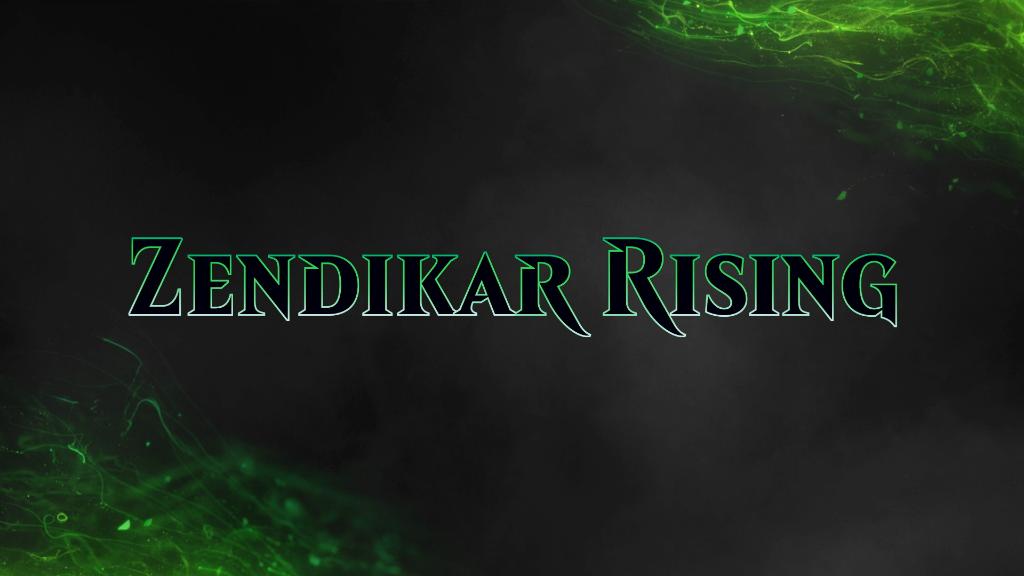 It feels like Core 2021 just released, but there’s always something to look forward to in the world of Magic the Gathering. That’s why we’ll take a look at all available Zendikar Rising spoilers, leaks and everything else we know about this year’s autumn set.

UPDATE: If you’re looking for the newest spoilers, you can find Crimson Vow spoilers here.

All Zendikar Rising spoilers are out. Check them out!

These cards are a new take on the double face mechanic. You can chose which side you’ll use when you play them.

Finally, if you want to also see basic lands, you can find all Zendikar Rising full-art basic lands here.

Besides Zendikar Rising spoilers, we also have some leaks, for example there was a leak posted on Reddit. The post contained just the text of a card, so here’s a mock-up with a fan art from janemini.

The card is by no means confirmed, but it seems perfectly balanced (as all things should be) and worded correctly, so it might be true – we’re getting a Black-Green (Golgari) Nissa.

This Leak was confirmed as true with Nissa of Shadowed Boughs.

The newest leak is Crawling Barrens (which was also posted on Reddit).

Zendikar is well know for its manlands or creaturelands. Crawling Barrens is another nice addition, although it’s a bit awkward that it gives you just colorless mana. Nevertheless, the effect can be quite powerful – having a big creature and a potential win condition in your mana base.

Don’t forget that you don’t have to turn this land into a creature if you don’t want to. You can just pump it up until it’s big enough that it survives almost anything. That might be especially useful with its first activation, so it dodges Bonecrusher Giant‘s Stomp.

According to a Reddit post, the source who leaked Triomes from Ikoria and a bunch of cards from Core 2021 also leaked the Zendikar Rising dual lands. The new cycle of dual lands will use the double-faced template. Here’s a mock-up, but these lands have been confirmed since then, as you can see above.

The idea is that you get a choice when the land enters the battlefield – you choose which color you need depending on what’s in your hand. Afterwards, that’s the color of mana your land will produce. This would is an interesting take on the dual lands.

They help the aggressive decks more, as they really need untapped lands early on. Temples are often very clunky in aggro strategies.

What do you think about the new trailer? Let us know in the comments below.

Before the trailer, we also got the teaser trailer. You can watch it here.

We hear Nahiri talk about Zendikar:

Born in the spark. Forged by betrayal. Tempered in silver and silence. I will fulfill my destiny. Zendikar will rise.

The line forged by betrayal is in reference to Sorin Markov. He broke his word that he’ll help Nahiri with Eldrazi, which they (together with Ugin) imprisoned on Zendikar. Nahiri has already avenged Zendikar by luring Emrakul, the Promised End to Innistrad, Sorin’s home plane.

That’s why it’s pretty interesting that she’s talking about fulfilling her destiny. What could that be? Will she simply help Zendikar recover or does she have something else in mind?

Mark Rosewater, head designer for Magic the Gathering hosted a Magic Panel for Comic Con Home at 12:00 PST on July 25th. Here’s a quick recap of everything we learned about Zendikar Rising:

Zendikar Rising is confirmed to be a land set. This means that there will be lots of cards that care about lands, probably also some land specific mechanics. Besides that, we’re also getting full art basic lands again!

But that’s not all, Mark also said that there will be 6 dual lands, that he wanted to fit in a set for a very long time. Six is a pretty weird number for number of dual lands in a set – there are usually 5 or 10, so that’s pretty interesting. We might get the 5 duals that were leaked plus one special dual land.

Rosewater talked about three mechanics. There is a new one, that’s actually a twist on an older popular theme. It’s changed in a way that it works better on Zendikar.

There will be two more mechanics, both of which were already on a previous Zendikar set. One is probably Landfall, which would make Nissa leak even more likely. What do you think the second one could be? Tell us in the comments below.

Bunch of legendary creatures from Zendikar are returning! One of them is confirmed to be in another color. However, there will be no Eldrazi.

There will be three Planeswalkers in Zendikar Rising, all of them are returning as well. Each of them has at least three different Planeswalker cards. Thanks to the previewed booster packaging, we already know that they are:

No specific cards were spoiled. Nevertheless, we got to see some art, like this happy Hedron.

Maro also talked about a new booster product – Set Booster (a booster with 1-4 rares). You can find all that in the video here:

But that’s not all Zendikar Rising information from Mark! On August 27, he also made a cryptic post on his Blogatog, containing the following teasers.

Zendikar Rising features three creatures with five creature types! What do you think those could be?

Furthermore, there is a white creature that can make an opponent lose the game by attacking them. It doesn’t even matter how high their life total is.

If you like getting stuff from the graveyard, you’ll be pretty excited about this one – there’s a multicolored creature that let you repeatedly get permanents from your opponent’s graveyard for no mana. There’s gotta be some kind of additional cost, right?

Can’t wait to see the Mouse card and why it couldn’t be a Rat instead.

Fans of Boros – there’s a red-white creature with a line that starts with “Whenever” and ends with “draw a card”. Might be cool for Commander.

Lastly, there are a couple of big artifact creatures. One is a 6/6 for 3 mana and the other is a 7/5 that can also cost 3 mana.

While he didn’t spoil any exact cards, he did talk about some lines of text on the cards. Remember, it’s pretty hard to guess what the card actually does, but it can be fun to guess. So, here are some of the text snippets that will appear on Zendikar Rising Magic cards:

Finally, there’s also Cowards can’t block Warriors, which is one of the most fun rules text on a Magic card – it first appeared on Boldwyr Intimidator. We shall see if it’s a new card or a reprint.

There are also some other weird teasers, including:

Now that final line pretty much confirms the leak dual lands. Those will be pretty interesting to see in action. You can check the full teaser on Mark’s Blogatog.

If you’re a newer player, you might not be familiar with the story behind Zendikar, and what makes it one of the most bellowed MTG planes of all time. So here’s a quick recap of what happened on Zendikar so far.

In Zendikar we found a world full of adventurers, which are trying to claim hidden treasures. It’s basically an Indiana Jones world. However, something strange starts happening in Worldwake, as ancient forces begin to awaken. Finally, Eldrazi Titans (like Emrakul, the Aeons Torn) are introduced in Rise of Eldrazi.

In those sets Chandra, Gideon, Jace and Nissa fought against the Eldrazi Titans. They also form the Gatewatch – team of planeswalkers, which will protect the Multiverse (essentially Magic’s take on Marvel Avengers).

They managed to defeat the Titans, but Zendikar was devastated after the battle.

However, the sets weren’t very well received, as the plane was missing its original feature – being an adventure world.

That’s about to change in Zendikar Rising, as Mark Rosewater confirmed on his Blogatog.

“We return to a Zendikar without Eldrazi and revisit the adventure world players fell in love with.” – Mark Rosewater on Zendikar Rising

So you can expect a world full of adventures and maybe some rebuilding after the Eldrazi literally lay wastes to it.

Based on what we know about Zendikar’s history, here’s some things we could expect in Zendikar Rising.

As mentioned before the first Zendikar had adventure and treasure hunting theme. To capture that feeling, Wizards put some older and expensive cards into the original print of Zendikar boosters.

As they weren’t technically printing those cards, but using ones already made, they got around the Reserved List, and there was a chance – although astronomically small – of getting a Black Lotus.

Second time around there were Zendikar Expeditions – alternate art versions of some of the strongest lands in Magic. They were very rare – you had to open more than 200 boosters (on average) to get a single Expedition card.

This time around we also got Expeditions. You can find all 30 Zendikar Rising Expeditions here.

First time on Zendikar we got green Omnath, second time it was green-red. In Core 2020 it got blue as well.

That’s why a Reddit user made a cool prediction that we might get a 4 color Omnath in Zendikar Rising. White would probably make the most sense as Zendikar will be in proccess of rebuilding. It would be cool to see what that would look like.

Given the art on the Collector’s Booster, 4-color Omnath is almost a 100% guaranteed.

You can find all available Zendikar Rising Products below. You can also check their prices by clicking on their names or pictures. The link will take you to the appropriate page on Amazon.

Booster box contains 36 Draft boosters of Zendikar Rising. You can also get a Bundle, if you’d like to get less boosters.

Set Booster is a new product. It’s a booster that costs slightly more then your regular Draft booster. However, you’re guaranteed a foil and you have a chance for up to 3 additional rares (so 4 in total).

You can find more about Set Boosters here.

We will get two Commander decks, even though we got Ikoria Commander decks this year already. Decks will contain mostly reprints and just three new cards per deck (so six total).

If you don’t won’t to miss new spoilers, make sure to give us a follow on Instagram or Facebook. Besides spoilers and news, you’ll also find Magic memes, reminders about Arena daily deals and codes. Speaking of which, you can find all currently available Arena codes here.

Until next time, have fun and may Zendikar Rising contain at least one card that you never knew you wanted.