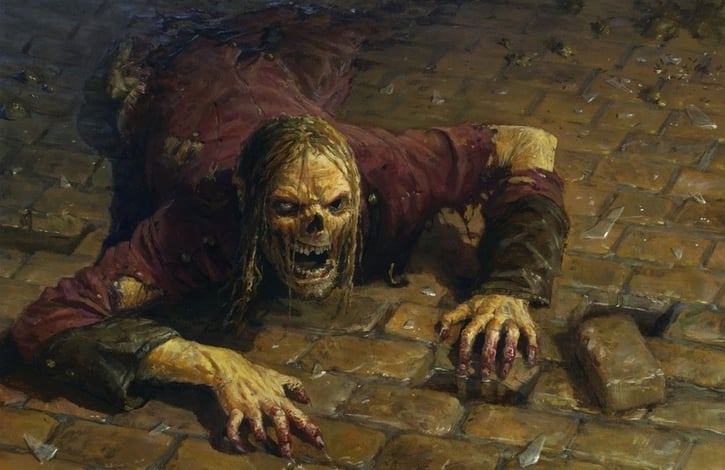 Zombies are perhaps the most popular tribe in Commander. Each new Magic set usually brings at least a few Zombies. Building a Zombie Commander deck is a lot of fun, though it can be overwhelming with so many options to choose from.

You could build almost a dozen Zombie decks without repeating any cards. There truly are a number of ways to build one. You can build it with various colors, but you’ll always want to include black.

The most powerful combinations for Zombie decks are mono black and blue-black. So I’ll focus on those two the most, though I will include notes about other possibilities. I separated my recommendations into the following sections:

Although I’ll focus mostly on Commander, you’ll be able to find great suggestions for your 60-card Zombie decks as well.

This section will describe the best Zombie tribal commanders. You’ll also be very happy to include any of these cards in the 99 of your deck.

You have plenty of options for mono black commanders in Zombie Tribal. First one that comes to mind is Ghoulcaller Gisa. She’s incredibly powerful, as it allows you to swarm the board with Zombies. You’ll be able to win with a wide board of tokens.

The fact that she has a built-in sacrifice outlet, which often comes in handy with various Zombie themes.

Liliana, Heretical Healer may just be a 2/3 creature with lifelink, but she flips into Liliana, Defiant Necromancer, and bring a Zombie along.

The key takeaway from this card is the -8 emblem. If you can protect her for the 4 turns it takes to get there, your creatures will be nearly impossible to remove for the entirety of the game.

Mikaeus, the Unhallowed requires less effort than Liliana to make your Zombies harder to kill. Besides, it also makes them bigger. What’s not to like?

It’s also a Zombie, which isn’t true for the previously mentioned cards, so he’ll get buffed by Zombie lords.

Finally, God-Eternal Bontu allows you to draw lots of cards by sacrificing your Zombies, and is a difficult threat to deal with by itself.

In the blue-black color combination, you gain flexibility in your themes. You no longer have to focus just on getting many Zombies onto the battlefield, as you get access to strong draw, mill, and protection strategies.

Gisa and Geralf are a perfect fit for a Zombie Commander deck. Milling yourself is always useful in that type of deck. Being able to play Zombies from a graveyard can be powerful, since not every Zombie has a built-in recursion.

Second option is the very powerful The Scarab God. It rewards you for having lots of Zombies, it’s hard to get rid of and it allows you to get creatures back from any graveyard. Even if you get your opponent’s creatures, they will become Zombies, which works great with your other synergies.

Zombie Commanders in Other Colors

If you add white to the mix, Varina, Lich Queen will provide you with an absolute ton of value. You’ll get to filter through your deck easily and you can make Zombie tokens from cards you don’t need in your graveyard.

By adding green, you get Sidisi, Brood Tyrant. This would be a deck focused around mill and recursion. You’ll also get access to green, which many players consider the strongest color in Commander.

Storrev, Devkarin Lich allows for a strong recursion theme, while being an aggressive threat on its own. While not the most powerful commander, it can be fun to build around.

All tribal decks want to play those lord-like artifact cards like Vanquisher’s Banner, Herald’s Horn, Coat of Arms, Icon of Ancestry, and Door of Destinies.

There are also a number of options that work well specifically in black decks, such as Bontu’s Monument. Zombies have access to a ton of actual lords, however, and you’ll never be upset running a number of them.

Black has the best lords of them all, proving your hordes with a plethora of buffs and keywords. Here are some that you might want to include:

The other color combinations have very few effective lords, but Gleaming Overseer, Diregraf Captain, and Eternal Skylord are must-includes if you’re playing in blue-black colors.

There are a ton of Zombies in Magic. You could play your 2/2 for 2 Walking Corpse, or your slightly more efficient Diregraf Ghouls, but those cards don’t win any Commander games. However, you don’t have to look very far to find Zombies with a ton of value.

As per usual, mono-black has some of the best value Zombies. These creatures might draw you cards, act as removal, drain your opponents, or are simply good creatures to sacrifice and recur. Here are some of your best options:

Adding blue to your deck provides you with a certain level of flexibility, especially in that you can draw cards and mill more effectively. Here are some of your best value blue and blue-black cards for a Zombie Commander deck:

While your options for value cards outside blue or black is little, there are a few cards that are must-haves if you’re playing in their colors.

Corpse Knight will do a lot of work in draining your opponents when your Zombies die, while Underrealm Lich is a powerful threat that prevents you from dying from milling out. Jarad, Golgari Lich Lord can drain your opponents very rapidly.

Like any deck, a Zombie Commander deck needs to win the game. This section is all about your best ways to get a ton of damage onto the board and overwhelm your opponents’ defenses.

In mono-black, you have a variety of big Zombies but also powerful spells that can overwhelm the board. Having a dozen 2/2 Zombies as well as three or four ways to buff them is a threat that nearly impossible to deal with.

Finishers in Other Colors

Other color combinations give you some powerful threats as well. There are a number of good creatures who feature the Zombie subtype. Vulturous Zombie, Storrev, Devkarin Lich, and Polukranos, Unchained are great options that you don’t want to miss out on, if you’re playing green.

While tribal decks want to focus on having plenty of creatures of that tribe, you can’t miss out on some of the powerful non-creatures that can make the difference between getting there and just barely falling short. Here are some of your best options.

There are myriad Zombies, Zombie themes, and Zombie synergies to choose from in Magic. It can be difficult to sift through them at first, but it also gives you plenty of options to choose from. This way you can make your deck unique and customize just how you want it.

Fortunately, the great number of options also mean that you can build a very budget deck. (Without having to include vanilla cards like Walking Corpse!) Afterwards, you can upgrade it as your wallet allows.

So what are your favorite Zombie and Zombie-adjacent cards? Did I miss any auto-includes for a Zombie Commander deck? Let me know in the comments below.

Since this article was specifically about Zombie tribal, I was only be Zombies and cards that synergize with them. I won’t talk about cards that are good in any black deck, like Bolas’s Citadel. To see cards like those, come back in a couple of days when my mono black Commander article gets published.

In the meantime, you can check the following articles:

Until next time, may your Zombies never Rest in Peace.