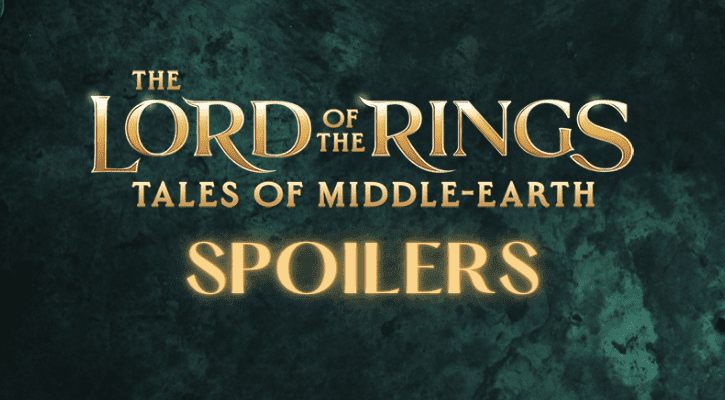 Are you a fan of Tolkien’s Lord of the Rings? And a fan of Magic the Gathering as well? Then you’re probably very excited about the LotR MTG set: Tales of Middle-Earth, and so are we! Today we’re talking about all LotR MTG spoilers, information, and speculation about this exciting set!

First, let’s take a look at some info about Tales of Middle-earth.

The cards in the set will work just as other Magic cards would. The only special thing is that the art, flavor, and mechanics will be a part of the Lord of the Rings universe. This is possible, since Tales of the Middle Earth set will be the first full set in the Universes Beyond.

What are Universes Beyond?

Wizards of the Coast first announced Universes Beyond back in February 2021. It acts as a brand within MTG, and exists in addition to and alongside Wizards’ existing line of products. It’s basically a giant umbrella that holds all the collaborations Magic has with various other intellectual properties. Stuff like Warhammer 40k Commander decks, and MTG Transformer cards are also a part of the Universes Beyond.

Whenever a special set such as this one is previewed, the big question is always in which formats is it going to be legal in. For Starters, Lord of the Rings Magic set won’t be Standard legal.

However, the set will be legal in Commander, Modern and Historic. There’s a lot to unpack here. Commander legality isn’t surprising. Nowadays, pretty much every MTG product that comes out is legal in Commander. That makes sense, since Commander is the most popular Magic format.

The Modern legality is quite unusual for a set like this. There is precedent of non-Standard sets going directly to Modern. That happened twice before, with Modern Horizons 1 and Modern Horizons 2. Both of these had quite high power level, and changed the format drastically. It’ll be interesting to see for what kind of power level Wizards aimed when making Tales of Middle-earth.

Good news for drafters – LotR MTG set was made with drafting in mind. This means that you’ll be able to draft a Lord of the Rings 40-card deck, and battle against other players. That’s quite exciting!

You’re probably wondering when will LotR MTG set release. Sadly, not that soon. While we don’t know the exact date yet, we know that it’s getting released in the third quarter of 2023.

This means that July, August, or September 2023 are possible release months. So, it is possible for the set to drop on September 22nd, which is the birthday of both Bilbo and Frodo Baggins. That would be quite a flavor win, and given that this date comes on a Friday, it’s actually possible, as Magic set releases always happen on Fridays.

Wizards said that they “couldn’t do the set justice without creating a full product lineup.” This means we’ll probably get all three major types of boosters. (If you don’t know what we mean by that, you can check the MTG Booster Pack Guide.) There will also be Lord of the Rings Commander decks, so you’ll be able to purchase a full 100-card LotR deck.

Sadly, no spoilers are available just yet. Nevertheless, Wizards mentioned a few characters (and an item), which you’ll see the Magic’s take on. So you can expect cards for:

Of course, one can simply expect the whole fellowship and other main characters as well. Who knows, maybe there’ll even be Tom Bombadil (who is a merry fellow!)

Besides, the various art, that you saw in the article, there are also 18 artworks previewed for a set of borderless, alternate art cards. You can find them below:

As you can see, you can arrange the 18 cards in the correct order, you get a big picture of the Battle of the Pelennor Fields. (Where the city of Minas Tirith is defended by the forces of Gondor and its ally Rohan.) This will probably be a nice challenge for MTG collectors.

In this section, we’ll answer some frequently asked questions about the Lord of the Rings MTG set. Some questions are recaps of the stuff that we talked about earlier. If you don’t find the information that you’re looking for, let us know in the comments, and we’ll get back to you.

In which format will Tales of the Middle Earth be legal in?

Tales of the Middle Earth will be legal in Modern, Commander, and Historic. Most likely in Vintage and Legacy too, but that wasn’t confirmed yet.

When does LotR MTG set release?

Will Lord of the Rings set be on MTG Arena?

Yes, it will. The set will likely be available for Drafting, and the cards will be legal in Historic.

Will the art of the LotR Magic set be based on the movies?

No it won’t. You won’t be able to cast Sean Bean as Boromir. Instead, the artwork will be done in the classic MTG style, and it won’t look out of place compared to your other cards.

That’s all we know about MTG LotR set so far. We’ll update the article, when more information becomes available, and if you don’t want to miss it, follow us on Facebook.

So, what are your expectations and predictions? What do you think about this collaboration? Let us know in the comments below. Furthermore, if you want to check some sets, that will release sooner, you can find all upcoming MTG sets here.