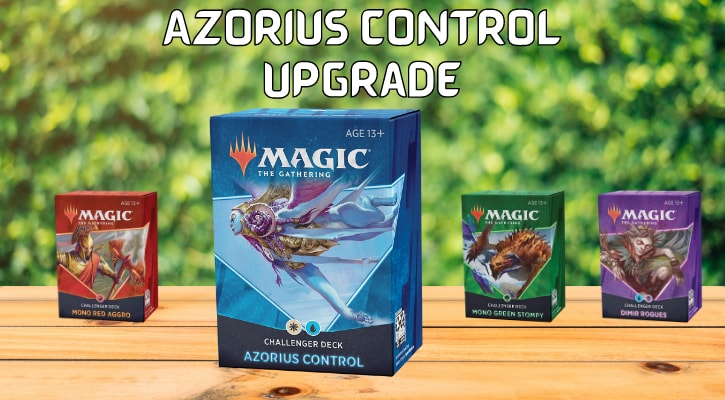 There is a budget upgrade and a full upgrade for each of the 2021 Challenger decks. You can check them out to, decide which one will work best for you. However, if you’re certain you’ll play Azorius Control, let’s get to it.

The Azorius Control Challenger Decklist embodies the shell of a control deck, but lacks consistency with its seemingly random 1-ofs and 2-ofs. It also doesn’t play Yorion, Sky Nomad as a companion, which is commonly played among most Azorius control decks. Our budget upgrades will be making the deck more consistent and adding enough cards to play Yorion. Let’s take a look at the new list.

The total cost of these budget upgrades is around $30 or so, but they will make the deck significantly better. Let’s check out why:

One thing you may note in these changes is that many more cards are added to the deck then are removed. This is to support Yorion, Sky Nomad as a companion, for which we need 80 cards.

The first change is removing one Negate and adding 3 Saw it Coming. Saw it Coming can counter any spell, making it much better then Negate in most situations.

The final cut in these changes is removing 3 Neutralise for 2 Plains and 1 Island. Because we are going to 80 cards it is important to add more lands to the deck, so we can consistently hit our land drops.

The next change is completing the playset of Archon of Sun’s Grace. With the multitude of Artifacts and Enchantments in our deck, Archon can create a huge board presence by itself. It also interacts well with Yorion and can be backbreaking for aggressive decks. You get one of these Archons from the sideboard.

Two Niko Aris are added. Niko Aris is a powerful Planeswalker ally in the early game, slowing down the opponent’s attack, and also in the late game, allowing you to draw lots of cards. Because of this Niko Aris is included as a flexible 2 of, that can be useful no matter the situation.

We add 4 Jwari Disruption to the main deck. It’s a flexible card, doubling as a situational counterspell and a land. Because of this it is added as a playset, as it will always be useful no matter the situation.

The next change is another no brainer. Doomskar is a board wipe for the slim cost of only three mana. Because of the efficiency of this spell, we add 3 Doomskar to play with the full playset. It really over-performs against aggressive decks.

This next change might be somewhat unexpected, but it is based on a decklist by Mythic Matt which he took to number 5 Mythic. Four Banish into Fable are added to the main deck. This spell might seem over-costed at a glance for 6 mana, however it will usually clone itself, sometimes multiple times. The ability to create three 2/2 tokens and return 3 permanents to their owner’s hands should not be underestimated.

The most crucial upgrade to the 2021 Azorius Control MTG Challenger Deck is adding Yorion, the Sky Nomad as a companion.

Yorion is a massively powerful card, being an extra card in your starting hand and putting a creature onto the board, while also generating huge amounts of value as it enters the battlefield.

Many of the cards in the Azorius Control Challenger Deck have abilities that trigger when they enter the battlefield, meaning that flickering them with Yorion will allow you to use them again.

That’s all for our main deck and companion changes. However, because we took some cards out of the sideboard, I will recommend some sideboard cards for you to add. You might want to add different cards depending on your expected metagame.

Since we only need to add 2 cards to the sideboard, I would add 2 Archon of Absolution. This niche sideboard card is close to unbeatable for Mono White Aggro, which is a popular deck in Kaldheim Standard.

That’s it for the budget upgrades. Now we’ll take a look at the fully upgraded Azorius Control deck.

Our full upgrade for the Azorius Control Challenger Deck is based of Mythic Matt’s decklist, which he played to rank #5 Mythic. Here are the changes you’d need to make from the budget version:

Let’s take a look at how Matt’s changes optimize the deck for competitive play.

2 Shatter the Sky are replaced by 2 Glass Casket. While Shatter is very strong, we already play 4 Doomskar, which gives us plenty of wraths. In addition to this, Casket has many advantages over Shatter the Sky. It counts as an artifact for Banish into Fable, is much cheaper, doesn’t draw the opponent a card, and can trigger Archon of Sun’s Grace.

1 Emeria’s Call[c] replaces a single [c]Dream Trawler. Despite Dream Trawler being a powerful card, Emeria’s Call has one large advantage over it. This is that it can double as a land, while also creating flying threats that can close out the game.

The final non-land change to the main deck is removing 1 Shark Typhoon for 1 Midnight Clock. Midnight Clock is a great situational card against Rogues, which is one of your tougher matchups. This is because it shuffles your graveyard back into your library, making it much harder for Rogues to mill you. It can also be very powerful in control mirrors, as card advantage is crucial and Midnight Clock draws you an entire new hand later into the game.

As for the mana base, we remove the Tranquil Coves, 3 Islands and 4 Plains.

That’s it for the main deck changes. As for the sideboard, I’ve included the changes that Mythic Matt put in his sideboard but I would recommend building your own sideboard for the metagame you expect to face. If you want any help with that, let me know the decks you play against the most in the comment section of this article.

If you want to try the Azorius Control Challenger Deck yourself, you can get one on Amazon. Additionally, if you need some accessories for you new deck, you can find a selection of the best sleeves here and best deck boxes here.

You can also find all Challenger Decks 2021 in this article.

Happy controlling, and see you next time!