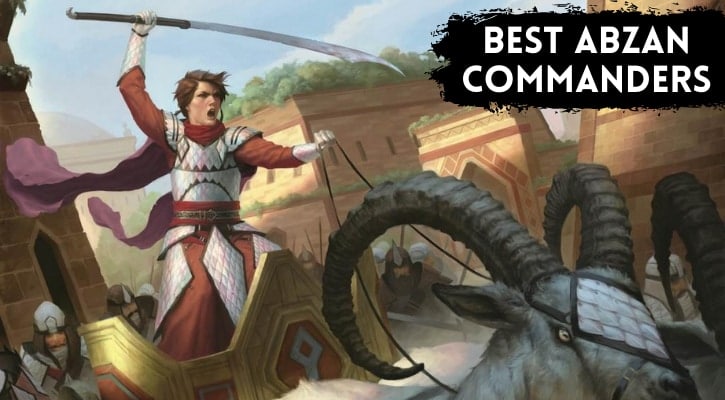 In this article you’ll find the best Abzan commanders. These can be at the helm of your White-Black-Green commander deck. Before we get to the list, here’s a quick introduction to Abzan, which can be especially useful, if you’re a newer player.

For the past couple of months I have been exploring some of the most popular, underrated, hyped, and powerful tribes in the game. Now, It is time to move on into another series of articles centered around multicolored commanders.

The first set of commanders I will take a look at are Abzan commanders, as they are the first alphabetically. Besides, they also have some of the most consistent and synergistic commanders out there.

After the introduction of guild names to double-color cards in Ravnica, the design team in charge of Magic introduced Houses. They were presented in the Khans of Tarkir block. These Houses were made up of a combination of cards with three colors. Each of them with their own art style, theme, mechanics, and lore.

The Abzan House is one based on the dessert of Tarkir. They are rough nomad warriors with an art style and look inspired by Arabic warriors. Their colors are Black, Green, and White. Quite a weird, but effective combination of colors.

Their main theme, at first, was +1/+1 counters. This later evolved to include different mechanics associated with the two color combinations:

Some of the best commanders in Abzan colors take advantage and utilize these three abilities to their best capabilities. That is what makes this color combination fantastic.

There are actually not a that many Abzan commanders, so there had to be some partner commanders included. With that said, let’s start with some Honorable mentions.

First, here are three options, that didn’t quite make the cut to the Top 10 Best Abzan Commanders list.

The first Commander combo on the list is Nikara nad Yannick. This combination is pretty solid. These types of Partner Commanders, although restrictive, are still pretty good. They are intended to work with each other, so there is no doubt that when both are on the field there will be a lot of stuff happening.

This pair focuses counters. They also work quite well with a blink strategy. Nikara rewards you for creatures with counters leaving the battlefield, while Yannik supports it with blinking. Nice and effective combo.

The weird thing is the combination of the two. There is also the option to include a sacrifice subtheme, as this creature also cares about creatures with high toughness dying. Pretty bizarre card that might work better as a part of the 99, than the actual Commander.

Teneb is an underwhelming Dragon in some regards. It’s one of the few dragons without red in its color combination. Therefore, it is not aggro based. Although this is the case, it does care about dealing damage personally.

He can be built like Voltron commander, which is slowly becoming less and less used in the modern game. So it’s sadly an outdated commander. Its second ability cares about bringing back creatures from the graveyard, which is not an amazing Voltron ability.

Overall, it’s an interesting Commander and deserves a mention, but it’s probably not worth building around. Better suited as a support card.

An enigma, without a doubt. When you see this card for the first time, you might have some difficulty understanding what it does. To be honest, it is overwhelming.

Basically, it combines the main themes in Abzan. Counters, graveyard, and creatures.

Removing counters to mill yourself, and get a permanent that costs 3 or less, is not a bad ability. Paying 3 for this is not ideal, but it can work. You can build a self-mill deck around this mechanic, as well as including counters support. It’s certainly a hard deck to build optimally.

The original “Wall” commander. The strategy of using creatures that are designed to have defensive quality in order to attack is fun. With Doran as Commander, these creatures turn into great blockers and attackers.

Furthermore, the ability says each creature. It gives your opponent’s creatures the same ability, which can sometimes mess up things for your opponent. Having blue in its colors would’ve also been a great help, as there are some good Walls in that color.

Nevertheless, seeing him at a Commander table is always interesting and for sure a good game, and it’s certainly one of the more fun Abzan commanders.

This is one of the best representatives for the Abzan idea. Attacking and giving creatures counters is its main purpose. This theme makes this card a great aggressive commander.

Anafenza’s second ability also takes away graveyard recursion from your opponents. In a game of Commander, the graveyard is often essential. Taking it away can be a big blow to a lot of decks. Apart from that, she has great stats. She is a 4/4 for 3 mana. Good attacker with a boost to other creatures.

You can build around Anafenza ins plenty of ways. Value, aggro, tokens, counters, and so on. Good versatility.

No other creature type represents Green-Black like Saprolings. And no other Abzan commander supports sacrifice strategy like Ghave. He includes +1/+1 counters, token creation, and sacrifice mechanics.

Each ability compliments the others, as can be seen from how they’re ordered. Ghave gains counters. They get removed, and you create a Saproling. It gets sacrificed and a creature gets a +1/+1 counter. This has the potential to be an endless loop with the right pieces and mana generation. Really, really fun concept for one of the best Abzan commanders.

Kethis gives Abzan a twist. It still has the graveyard recursion theme as a main part of its theme. But this card is mostly known for its Legendary theme. It is one of the best Abzan commanders for this fun (and sometimes expensive) strategy. Legendary creatures are always the best.

Kethis works not only with creatures, but with lands, enchantments, artifacts, and planeswalkers too. It makes them 1 mana cheaper, and gives you the chance to play them from your graveyard. Of course, it has three decent colors as a basis. Build this however you like, as playing with legendaries is always fun.

Entering the part of the list where the abilities get more creative and incredibly stronger. At the halfway point, we have Kathril. This creature takes the concept of counters to another level. It has one of the most thick text lines on a card that I have seen.

The main idea behind this card is to have a lot of cards with keyword abilities such as flying, trample, vigilance, lifelink, etc. and then have them in the graveyard. When the time comes and Kathril enters the battlefield, you get to put a counter with an ability of a creature in the graveyard.

Plus, whenever you do so, Kathril gains a +1/+1. This means that essentially you can pretty much put all ability counters on Kathril, give it +1/+1 each time and swing with it all in one go. Petty interesting concept, for sure.

Karador is the classic go-to Abzan commander. It cares about creatures in graveyards. You can build a deck with any sub-theme, strategy, spice, or mechanic. One thing is for sure, there will be creatures coming in and out of the graveyard all round.

You can build all sorts of decks around Karador:

Basically, you can build a deck with Karador as a Commander any way you like. This is what makes this card one of the best Abzan commanders out there.

One of the newer additions to the list. Nethroi brings mutate to Abzan. Before going over its abilities, its base stats are great. 5/5 with deathtouch and vigilance for 2 colorless and Abzan is great value.

Its mutate cost is a bit more heavy on black and costs two mana more. But it is worth it. The fact that it can bring absolutely any creatures from the graveyard to the battlefield just by mutating is wonderful.

Sure, the combined power has to 10 power or less. But that opens up the ability to return plenty of creatures with low power but good abilities. There are also creatures that technically have 0 power, like Polukranos, Unchained.

All in all, Nethroi is a superb card that deserves more brewing time and some more mutate support cards.

There were a lot of partner Commander couples that could’ve made the top of the best Abzan Commanders list. I went with two pairs. The first, Ravos and Reyhan.

This couple represents Abzan perfectly. Ravos takes care of returning creatures from the graveyard to your hand each turn. His colors also open up the Aristocrats side of the deck. It also pumps all creatures with +1/+1.

Reyhan, on the other hand, supports the aggressive +1/+1 counters side of the deck. It cares about creatures with +1/+1 counters dying. He also has the ability to move them around. The Abzan colors perfectly give you access to ramp, removal, and support for the three main subthemes in the deck. The combination is simply ideal.

If the combo of Ravos and Reyhan is ideal, then Tymna and Ikra Shidiqi are a perfect match.

Tymna is pretty much the most used and powerful partner Commander. And for a good reason. She has lifelink, and the ability to draw you a bunch of cards, if you can deal combat damage to multiple opponents. Pretty great ability.

Ikra, on the other hand, gains you life your creatures get through. This means that both cards work perfectly with one another. The set back of losing life is solved by having Ikra Shidiqi. One compliments the other. And the two of them together are super powerful. They have access to some of the best colors, and they can be built in so many creative ways.

Before we wrap up, if you’re looking for an Abzan deck, which you wouldn’t need to build from scratch, you might want to get the Symbiotic Swarm Commander deck.

It contains multiple commanders that I talked about today:

All in all, it’s quite a good pickup for a new Abzan player.

To conclude, Abzan as a color combination is an excellent option in Commander. It has defined themes and strategies. Weirdly enough, it is often one of the most underused combinations out there. It is not widely built or mentioned in the Competitive EDH scene. It is seen in casual play, but it is still often underrated.

Green, Black, and White make for an interesting blend of mechanics. It has all the good components that you look for in a deck. Ramp, board presence, and removal. The only thing that it is missing is a good card draw, but this can be fixed with certain cards.

Most Abzan generals are solid choices that can hold their own in any Commander table. The ones in these articles are just a few examples. With new sets coming, there will certainly be more commanders to add.

As always, comment if you agree or disagree with the list. If you think we missed any cards, let us know.

Stay safe, have fun, and go for wins with your Abzan deck!