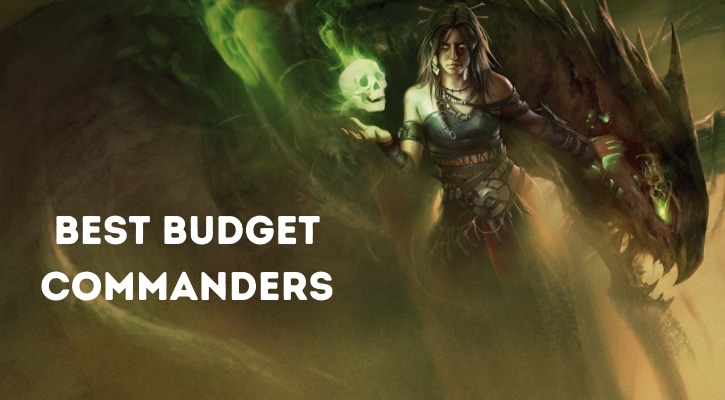 Hello everyone! Are you looking for a cheap, yet strong commander? If so you’ve come to the right place – today I’ll go over my favorite top 10 best budget commanders.

I tried to pick them in a way that they are both fun to build around and capable of winning games too. Besides all of that, all commanders are relatively cheap and affordable.

With all that said, let’s get right to it.

The Locust God has gone down in price since being reprinted in Ikoria Commander decks, which is great for everyone that loves drawing cards. With cards such as Brainstorm, Reconnaissance Mission, and Teferi’s Ageless Insight you can easily swarm the field quickly, and have a full hand to counter your opponents’ cards.

Locust God is powerful but lower on the list because you might end up spending money on mana rocks since you won’t have green ramp. His high mana cost can also hurt you if you don’t have access to ramp early.

Vaevictis is great for making your opponents sacrifice specific permanents, so he can get around indestructible cards. Additionally, cheating out high-cost permanents is always a great idea. You can decide that you’ll only play permanents in your deck. This way you’ll always get some value.

You can use Farhaven Elf and Omen of the Hunt to ramp your lands. You can also cheat more cards into play with Aid from the Cowl.

Running Vaevictis with token generators and high cost creatures makes him very powerful, but you also risk giving your opponents powerful permanents too. That’s why he is lower on the list, as he is very high risk, but hopefully high reward.

I’m surprised more green players don’t play Multani. He has semi-shroud, he can easily end up as a 20+/20+ big boy, and his mana cost is great considering his stats. The most powerful Multani player I’ve ever met didn’t build the deck around drawing, since most of his opponents would play their own cards to draw anyway.

Your goal with this deck is to ramp, and give Multani trample or unblockable. That can be difficult, since you can’t target him, but cards such as Siege Behemoth and Aggressive Mammoth can get around that.

I love Yasova because of her versatility. She has a low mana cost, so you can get her out early and get in for some damage. In the late game, she can wreck players by stealing their best creatures.

You’ll want to increase her power by using auras and equipment, such as Hero’s Blade or Blackblade Reforged.

Then you’ll use sac outlets such as Jalira, Master Polymorphist or Proteus Staff to use your opponents’ creatures to sneak yours into play.

All in all, Yasova is surely one of the many great budget commanders – being both fun and pretty cheap.

Zaxara is great for being versatile. You can go for X cost sorceries such as Animist’s Awakening and Villainous Wealth and just use your hydra tokens for blockers as you build up.

You can also go pure creatures and fill the deck with X cost creatures such as Mistcutter Hydra or Hungering Hydra. You won’t get just the card you cast, but also a Hydra token. This can quickly overwhelm your opponents.

I personally play Zaxara as a mix of both, plus some cards that focus on +1/+1 counters on creatures such as:

You can end games pretty easily by giving the tokens trample or unblockable.

You can get Zaxara in the Enhanced Evolution Commander deck.

Chulane is certainly one of the best budget commanders. He’s great for ramp and enter the battlefield triggers on creatures. Some of my favorites for this archetype ramp are:

Once you have your mana, you’ll also want your utility creatures. Some great options are:

Biomancer’s Familiar also makes it cheaper to bounce your creatures, which is terrifying for your counter spell creatures.

You can get Chulane in the 60-card Brawl deck, which includes plenty of good Commander cards as well.

Ayara is one of my favorite commander decks. You swarm the field with cards such as:

Each creature not only helps you gain life, but also damages your opponents. Ideally, you’ll win without ever needing to attack.

#3 Nikya of the Old Ways

I am terrified of my fiancée’s Nikya deck. Having a commander that doubles your mana, while costing only five mana, can get out of hand easily. The best part is you don’t need pricey creatures. Some less popular creatures with high converted mana cost, that won’t work in other decks, could work with this one.

Some good choices for your doubled mana are:

If you expect to face control, you can use cards like:

The goal of this deck is to overwhelm your opponents quickly. You can either use creatures that attack early, or focus on X cost creatures and then wait until you can kill everyone at the same time. There are lots of ways in red to give everything haste, which makes this a lot easier.

Also a favorite of mine, Alela is great for budget players since there are so many ways to build her depending on if you prefer artifacts or enchantments.

I personally play her as enchantment focused, with mana artifacts to help ramp and get fairy tokens. Enchantments that pump your team are great. Not only will they make tokens bigger, they’ll even get you one if you have Alela in play. Some cool ones are:

Drawing cards is always nice, and since you have tons of tokens, you can draw lots of cards with Bident of Thassa, Coastal Piracy, and Reconnaissance Mission.

I also put a large emphasis on enchantments that eliminate my opponents’ cards. Darksteel Mutation and Imprisoned in the Moon are great for taking out strong Commanders. Aura of Silence, Frogify, and Conclave Tribunal are also good for keeping your opponents from controlling the board.

Sigil of the Empty Throne and Gravitational Shift are great for getting stronger tokens on the field and overwhelming your opponents.

I love this deck because it gives you so many great defense tools. You can play a bunch of enchantments and artifacts to control your opponents’ stuff. All while providing a steady army of flying blockers, which can also be used for offense in a pinch.

You can find Alela in the 60-card Brawl deck, which includes plenty of good Commander cards, like Arcane Signet as well.

I’m so glad Meren has gone down in price. She’s so much fun to play with, and the sheer amount of value of sacrificing and returning creatures you can get out of her is insane! That’s why she’s number on this list of best budget commanders.

You’re going to want creatures that let you ramp early, such as:

Sakura-Tribe Elder is especially important, as it has a built-in sacrifice effect.

Once you get the experience counters, you can start getting rid of opposing permanents, with cards like:

Syr Konrad, the Grim is also amazing since he will get more creatures into your graveyard, while also making your opponents lose life.

The goal with this deck is to outlast your opponents. Keep making them sacrifice creatures and attacking when you have openings. You can use Zulaport Cutthroat and Blood Artist as win conditions, taking everyone’s life totals down slowly. Spore Frog is also a great for protection if you keep bringing it back.

That’s all about best budget commanders. Hopefully, you found something that’ll work for you. Please comment below if you have questions, budget commander ideas, or if you want some deck lists to go with these commanders.

If you’re always happy to get more Commander content, here are some great articles that you might enjoy: