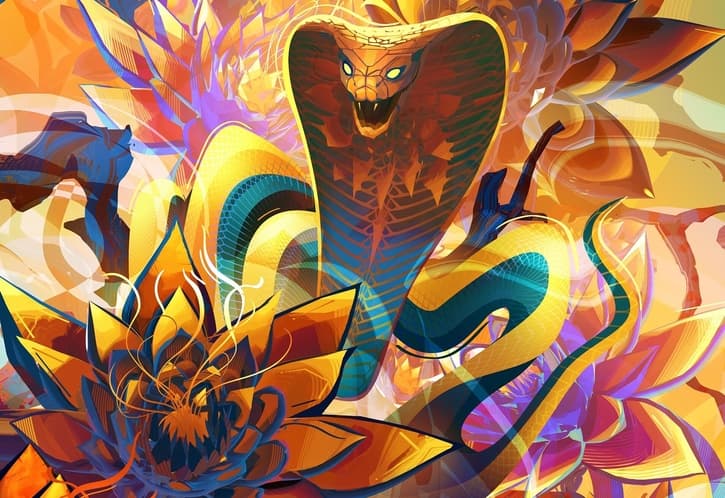 Zendikar Rising is here! All of these shiny new cards have been released, and we’ve had a couple weeks to play with the new cards on Arena.

Well I’m glad you asked, hypothetical reader. Luckily, I’ve made you a nice “top ten” list with best cards to craft from Zendikar Rising to help answer that question.

Here is my list for the top 10 rare and mythic cards that are seeing success in the Standard format post Uro ban.

This card is seeing a lot of play, so I would be remiss to not mention it. The new rogue deck is a real powerhouse, and Zareth San certainly contributes.

Your opponent cannot afford to let even the most unassuming rogue through for damage while you have four mana. With a combination of flying, flash, and a few unblockable effects, this deck can consistently capitalize on the Trickster’s effect. Once that happens, you pick any permanent in your opponent’s graveyard to bring to the battlefield. That is some intense value packed into one card.

Honestly, there are no other decks that can use this card to its potential.  To be consistent, Zareth San’s effect requires a deck to use many rogues.

If you do intend to play rogues, then this card should certainly skyrocket up your list of crafting priorities. It is definitely a staple.

Some of my personal favorite cards are those that feel like puzzles. Many interesting cards require you to think more carefully about how you play them. I love seeing a card like Demonic Pact and thinking, “How do I make this work for me?”.

Legion Angel is an example of that kind of puzzle succeeding. Players seem to have decided to run one copy in the main deck and three in the sideboard – even in best-of-one formats.

While that means you have a smaller chance of drawing it, you essentially get three more 4/3 fliers with that one draw.

However, you don’t have to play it that way. If you want more consistency, you can run two or three in the main deck. Having the option to choose more payoff or more consistency is very rewarding, and apparently, pretty effective.

Of the new cards supporting the Blue-Red Wizard deck, this seems to be the most prevalent.

The deck in question wants to keep drawing spells and putting them in the graveyard. Importantly, Magmatic Channeler is an engine for the former and a payoff for the latter.

It gives you the option to discard a card and cast a spell from the top of your deck (or “psuedo-draw). It also benefits from having four or more instants and sorceries in the graveyard.

Magmatic Channeler is a good draw at any point of the game and has become a staple in this deck.

The cat lover in me wanted this card to be good, and it delivers. A trend that you’ll see among the best cards of Zendikar Rising is that the landfall mechanic is potent. If a card has “landfall” in its text, it immediately demands consideration.

Your deck is going to have land in it. Your deck might even have ramp effects that get land out of your deck faster. You might have Fabled Passage in your deck. Any and all of that already synergizes with landfall cards.

Felidar Retreat proves this by applying steady, incremental pressure with each and every land. It turns every land into token/counter generators.

It works best in decks that incorporate other colors. You will likely see this card in White-Green or White-Red-Green Landfall decks. Those decks already run multiple copies of Fabled Passage and Migration Path.

It has also made fast friends with Scute Swarm to the surprise of cat owners everywhere.

These MDFC’s (or Modal Dual-Faced Cards) are exactly what players mean when they talk about “consistency.”

These spells are mildly overpriced in terms of mana cost, but they can be played as a land if needed. Having a land, even a mediocre one, attached to an expensive spell like this makes it so much easier to run that spell. If you have it in your opening hand, you can play it as a land – no harm done. If you draw it late in the game, you can play a significant board threat like Agadeem’s Awakening.

Agadeem’s Awakening has become a great option for spicing up the mana pool in two new decks. White-Black Clerics and Blue-Black Rogues can use this card as a finisher late in the game. Playing this for 6 can bring back three creatures that will likely begin interacting with one another immediately and help push the game your way.

The second mythic rare MDFC worth mentioning is Shatterskull Smashing, the big new removal spell in red got in Zendikar Rising.

Several times in the past, removal spells like this have been playable. Cards like Heat Ray and Fireball made it into a couple decks and saw a bit of play.

However, like the other MDFC’s, this card is substantially upgraded by the land on the back. It makes a lot of sense to replace a few of your mountains with these since the opportunity cost is so low.

This card is an easy inclusion.

There is strength in numbers. These little beetle bugs illustrate the power in a “go-wide” strategy. You can overwhelm your opponent with a tide of insects. (There is even some fun synergy to be had with Terror of the Peaks here).

In a format that has Fabled Passage and Migration Path, it is very easy to get this Boot Scute-in’ Boogie underway very quickly.

Sure, Cinderclasm and Massacre Wurm can put a quick end to your army of aphids, but there is a way to address that as well:

Scute Swarm interacts with mutate mechanics in an impressive way. The landfall effect makes a token copy of Scute Swarm, so the new token keeps all mutations. In brief, your 1/1 insects can instead be a tidal wave of Migratory Greathorns that are much harder to answer.

I honestly underestimated these at first. I thought that they would struggle to fill the big shoes of the “shock lands” that left in rotation (like Watery Grave and Stomping Ground). However, these became one of my favorite additions to the format.

Instead of a two-color land that comes in tapped or takes two of your health, we got a new elegant land option.

These lands come in untapped, but you have to choose what color mana it will produce for the rest of the game from two possible colors.

There’s not much else to say about it mechanically. However, these cards have a simple versatility that make them staples in the Standard format. They are certainly one of the safest Zendikar Rising cards to craft on Arena.

Along with the other mythic MDFC’s, Emeria’s Call is a safe card to craft. The low opportunity cost of these cards makes it easy to think about replacing a few basic lands.

This card gives you 8/8 in stats distributed across two 4/4 flying angel tokens. That is pretty cost-efficient. These tokens are resilient to spot removal like Heartless Act since only one can be destroyed that way.

The second half of the card can be relevant too. Any non-angel creatures that you already had on the board will be indestructible throughout your opponent’s next turn. That will rarely be why you play this card, but it will certainly add some incidental value.

And all of that is attached to one of your lands.

You know we were going here. We cannot talk about the state of Standard or its best cards without addressing the 4-color elephant in the room.

Uro, Titan of Nature’s Wrath may be banned in the format, but this big elemental is doing just fine. The very dominant 4-color Omnath deck is a massive presence in Standard, and you have probably noticed this yourself.

Omnath embodies the power and consistency of the Landfall mechanic. This card is both a payoff and an enabler for producing more mana.

It even does it all in increments of four for stylistic points.

This one feels a little too easy. Lotus Cobra is a reprint from an earlier set. It was impressively powerful then, and it shows no signs of stopping now.

This little danger noodle is a 2/1 body with a steady ramp effect. Every land that hits your board gives you one mana of any color.

Fabled Passage can become a 3-mana play, lands that come in tapped still give mana, and frankly, Omnath does not need this snake’s help.

History has shown us how much play this card can see, and this is one very safe wildcard to spend.

There are so many cool cards in this new set. I am excited to see what players do with Moraug, Fury of Akoum and it didn’t even make the list. Hopefully, more bizarre and interesting decks will rise to the surface in Standard.

This list of best Zendikar Rising cards to craft is my prediction for what cards are most likely to see play, but you should definitely craft what speaks to you. Personally, I intend to make four copies of Felidar Retreat and see how many cat tokens I can get away with.

Whatever you choose to craft, good luck and have fun!