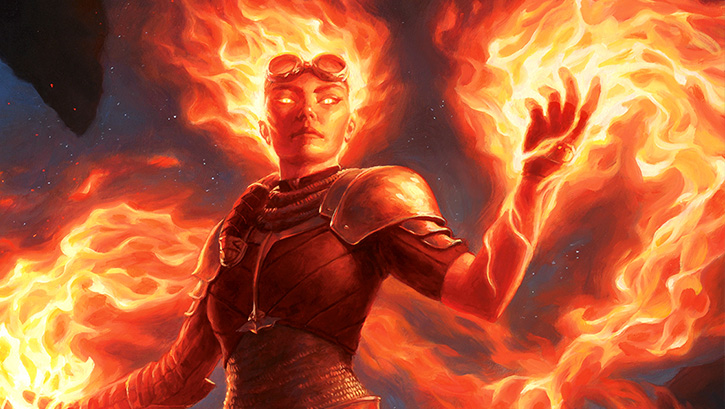 Do you want to impress your friends with great predictions about best MTG Core Set 2020 spoilers? Do you want to see the coolest cards from the newest edition? If so, you absolutely need to read this article.

We have gathered the best cards previewed so far. They are sorted from newest to oldest, so bookmark this article during preview season. If you’re preparing for your next draft, you should certainly check our M20 draft guide.

Core Set 2020, or M20 for short, is the 20th core set of Magic the Gathering. They are usually the best starting point for beginners. But not only that! The last Core Set also had a lot of expensive reprints and exciting new cards for both Standard, Commander and Draft. Therefore it has plenty of cards for everybody.

We won’t preview every card in Core Set 2020. Do you really want to see every Centaur Courser possible? Instead you will find the best Core Set 2020 spoilers bellow. Not only on power level, but also from story perspective.

So let’s start and take a look at the best cards from the freshest MTG edition.

This set is a real treat for Commander players. Yarok is Panharmonicon with a body. Big body with deathtouch and lifelink that is. There are so many good effects that trigger on entering the battlefield, for example:

Those were only creatures, even something like Commander’s Sphere gets better with Yarok. While Yarok may spawn a fun archetype in Standard it’s probably still more of a Commander card. However the demand will be probably big and if you want one, we’d recommend not to wait too long to get. Two months after release is usually time when a card like this is at its lowest price.

Now, that’s a BIG dinosar-zombie. It doesn’t matter how many cards you have at the end of the game. The only thing that matters is getting your opponents life to zero.

Rotting Regisaur does this very convincingly. Surely, sometimes your opponent will kill it, after you had to discard a card. However if they deal with the dinosaur during their turn, you won’t even have to discard a card. So it isn’t that bad against one of the pillars of Standard – Teferi, Time Raveler.

Against mono red, you won’t care that you had to get rid of your expensive cards – they can never attack into this thing, and it will kill them quickly. We’d recommend playing Llanowar Elves with it. 7/6 on turn two is insane. Expect Regisaur to see a lot of play.

Ixalan dinosaurs have three more months in Standard. If you like them, you should definitely try them alongside Marauding Raptor.

Just imagine playing Raptor on turn 2, followed by Ripjaw Raptor. You’ll attack for 4, draw a card and still have two great creatures in play! That’s some serious value – and it might be just the push dinosaurs needed.

Some of the best Core Set 2020 spoilers are apparently new Commander cards. Golos looks like he will be a staple in five color decks for ever.

It provides ramp, fixing and serious card advantage. You can get any land – either one with useful ability or one that provides multiple colors of mana. While hitting lands with his second ability isn’t ideal, you can still play them. That’s because his ability says play and not cast.

If you really like 5-color decks, you might want to try Golos alongside Niv-Mizzet Reborn in Standard. Maybe you won’t win a lot, but when you will. it will be glorious!

Leyline of the Void

This powerful enchantment was a very potent card in Modern sideboards. That’s why it fetch a price of $30 before the reprint.

Besides messing up with lots of Modern strategies, Leyline of the Void can also do some work in Standard. It basically turns of Command the Dreadhorde, although you still have to deal with the planeswalkers the cast from their hand. Oh, and Tamiyo, Collector of Tales second ability also doesn’t work.

Kaalia of the Vast is back! The new version isn’t that good for Commander. Nevertheless she provides some serious card advantage if you build your deck correctly.

It can draw up to three cards! Rouge Refiner had worse body and only drew you a single card, but was still banned in Standard. Kaalia requires careful deck building, but she can totally be worth it even if she draws you only one card.

Looks like we’re getting amazing reprints in this Core Set as well. This enchantment is very powerful Modern card. As such it was priced around $25 before the reprint. So this will be a nice opportunity to get them for cheap. The best time to get them will probably be in August 2019 – around month or two after the prerelease.

Card will probably see play in Standard sideboards. It prevents both burn spells and discard spells from targeting you. Mono red deck are going to have a bad time if you’ll start with Leyline in your hand.

Last but not least, if your friend at home is always playing 20+ discard spells in your deck. Consider adding Leyline to your deck, just to mess up with them.

Jeskai players, rejoice! If you want to play either Spirits or just ordinary token decks, Kzakar is an amazing comander for you.

This Bird Wizard can also be used in a spell heavy deck such as storm (Mind’s Desire). Each instant or sorcery gives you a Spirit and the Spirit can be sacrificed for mana. So each instant and sorcery basically costs one less.

It’s also possible for Kyakar to see play in Standard. It’s body is a bit fragile but the effect makes up for it. No matter how strong the bird will be, it will surely unlock an interesting deck. As such Kyakar is surely one of the best Core Set 2020 spoilers.

Rienne is an interesting card. The most obvious use is at the helm of a Naya (green-white-red) commander deck with lots of multicolored creatures.

You could also play her in some kind of five colored deck with Niv-Mizzet, Reborn. You can’t draw her with dragon, but you’ll get most of your creatures back, when they die.

This will be a Buy-a-Box promo, available if you buy a whole booster box. You can’t open her in a booster pack. If you’re buying a booster box, make sure they include Rienne too.

Tireless Tracker was all over the place when she was legal in Standard. Dread Presence is surely a different card. It costs one mana more, doesn’t get bigger and requires a Swamp.

On the other hand you get a card immediately. You also get another very, very good ability. You can deal 2 damage to any target. Planeswalkers, creatures or your opponents, nothing is safe from black Groot. Besides that, the life-gain matters against aggressive decks.

An important thing to remember is the value of having a choice. This card will have the ability to play differently against different decks:

Because of all those options Dread Presence seems like a very strong card. If the preorder prices won’t be too high, we definitely recommend getting some.

You can also try to combo with Scapeshift. With ten lands in play, you can play Dread Presence, cast Scapeshift, and K.O. your opponent from twenty. Don’t forget that Overgrown Tomb also counts as Swamp.

This is a cat. Made from ember. That vomits fireballs.

If this isn’t one of the best M20 spoilers, I don’t know what is.

Ajani, Strength of the Pride

Planeswalkers that protect themselves with tokens are usually very good. Well, if they are properly costed anyways. Ajani most certainly is.

He can create two Ajani’s Pridemates and still survive on one loyalty. Those Pridemates play nicely with his first ability. The last ability however seems like a win-more.

That’s why Ajani really needs a specific deck to use all parts of the buffalo, erm… cat? That means you probably want to play cards that care about gaining life like:

Cards that let you search your library are called tutors as in Vampiric Tutor. Those type of cards are usually very strong. That’s why the cheapest tutors cost at least four mana nowadays. Take a look at Mastermind’s Acquisition for example.

The newest tutor effect however costs only one mana! But because of that it comes with a downside of your opponent getting to search too.

Of course we always mitigate the downside. Here are just some examples what you can do:

Core Set 2020 focuses on our favorite fire mage – Chandra Nalaar. Wizards certainly weren’t holding back. She got not one, but three cards in this set. They’re showing her progression from a novice to the powerful flamethrower we know today.

Novice Pyromancer seems of appropriate power level for an uncommon planeswalker. It’s similar to the ones we’ve seen in War of the Spark. First ability seems to be foreshadowing return of Elementals. Omnath, Locus of Rage players, rejoice!

To be honest, this Chandra is truly a novice. As such she won’t see much play in constructed, but you’ll probably be glad to open her in Draft or Sealed.

Acolyte of Flame might not look like much at first sight. She isn’t too flashy and her first ability doesn’t even do much. Despite that, we think Chandra will probably be much better than she looks.

Her second ability is certainly doing some serious work:

Do you remember a card called Snapcaster Mage? Acolyte is probably not that good, but the last ability shouldn’t be overlooked. Especially in formats bigger than Standard, you often want to cast cheaper spells anyways. Kolaghan’s Command, anyone?

In a way the rare Chandra reminds us of Liliana, the Last Hope. They both seem weak, but are just different from what we’re used to. Both cost only three mana and that’s a sweet spot for a format like Modern. We certainly have high hopes for this planeswalker – both in Standard and Modern.

Don’t you just hate playing against control? You get them down to low life and then they just counter every. Single. Spell. Well, apparently, Chandra, Awakened Inferno hates control too.

She comes down when you have 6 mana and she won’t get countered. You can use her plus(!) ability and suddenly be favored to win the game. As you well know, control players usually don’t have tools to win the game quickly. Chandra’s emblem will finish them eventually.

Control players won’t be the only ones sad to see Chandra on the opposing side. Decks with a lot of small creatures will be another prey for Chandra. Thanks to her second ability, you’ll be able to get rid of them all.

Finally her last ability will get rid of most planeswalkers and creatures alike. This is useful against basically any deck.

Chandra might seem a bit pricey at 6 mana, but you’ll get your money worth. We expect Chandra to be a big role player in Standard and a possible inclusion in Commander decks. You might have missed it, but her plus ability gives an emblem to each opponent.

If you like the art style of Chandras you can take a better look on Gizmodo, where they were previewed.

If you want to open some of those cool cards – you can already preorder Core Set 2020 on Amazon. You can also check its price if they have any new deals.

Want More Magic? There is More!

Don’t want to miss another one of best Core Set 2020 spoilers? Be sure to give us a follow on our Instagram or Facebook. There you’ll find everything from daily MTG memes to spoilers. Join us, you’ll have fun. 🙂

If you play Magic on Arena, you should check codes for free stuff here. Anyways, have a great day and may you boosters contain the best Chandra.