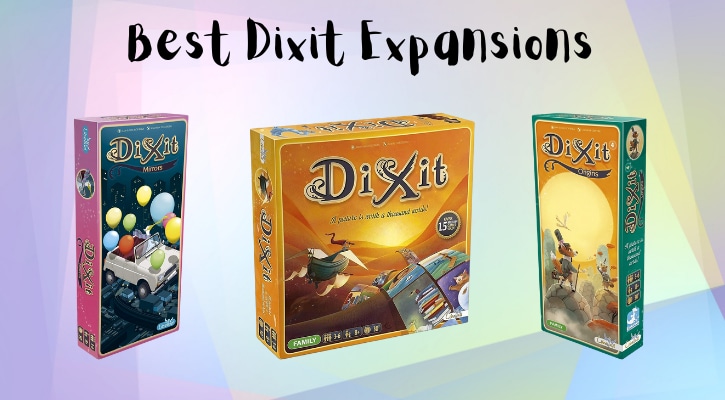 Of course, there isn’t one single expansion that would be best for everyone. That’s why instead of ranking each expansion, we’ll talk about the most popular Dixit expansions, and highlight their best features. This way, you’ll easily find out which one you’ll enjoy the most.

If you’re in a hurry, here’s a quick recap of our favorite Dixit expansions, including a base set, which is necessary to play the game:

However, if you’ve got time, let’s explore the candidates for the best Dixit expansions.

Dixit Base Game – Necessary for Expansions

Before you start buying expansions, make sure that you have the base game. Expansions won’t come with all the things you need for a game. In addition to the cards, you also get the game board with 6 wooden rabbits, so you can keep track of each player’s progress. There’s also 36 tokens, which are used for voting.

Besides this base set, you also have another option, to get all the things you need for a game of Dixit. That’s the very next product we’ll talk about.

The Odyssey set offers an improved voting system – with special voting cards. There’s also a new game board and 12 rabbits! This means that instead of the usual 3-6 players, this game can support 3-12 players, while still providing a pristine Dixit experience.

So if your play group often has more than six players, you should definitely get the Dixit Odyssey game.

Note that there’s a difference between the Odyssey game (big box), and not the Odyssey expansion (smaller box). They both feature the same cards, but the expansion doesn’t come with the things you need to play with more players. So make sure to pay attention when purchasing this product.

If you just want some more cards with the similar artwork style, then Origins is the best Dixit expansion for you. While the cards are somewhat different from the ones you get in the base set, they still feature that same vanilla feel.

There isn’t a single standout theme in the Origins expansion. However, most of the cards do feature a creature of some kind. They also frequently look a bit dangerous.

All in all, it’s a nice expansion if you just want some more cards to add to your regular set, and increase variety. However, if you’d like a more different art style, you’re better off with some other Dixit expansions.

If you really want to push your animation to the 100%, Harmonies expansion is a perfect pickup. Why? Because it features the most abstract art of all Dixit expansions.

You’ll be able to focus more on feelings and abstract ideas. You won’t want to name specific items, as they will very often be a big giveaway for other players. The artwork is mostly full of primary colors and shapes. No sharp contrasts in this one.

If you enjoy the abstract hints based on feelings, you really can’t go wrong with Harmonies.

Revelations is certainly one of the best Dixit expansions. The most cards have the theme of Ancient Greece, but that’s not all. The artwork looks really trippy, and most of it is in motion.

Furthermore, cards can regularly represent the same concept or idea. Of course, that’s the case with the most Dixit expansions, as it’s one of the things that makes the game so fun. However, this is even more prevalent with the Revelations expansion, which makes it truly amazing.

So, Revelations is an incredible expansion if you’re looking for a new flavor of Dixit game. If you’re a fan of Ancient Greece, that’s even better!

Dixit has been around for a long time. In fact, the first edition was released way back in 2008. Around 10 years later, we got this special 10th anniversary edition.

What’s so special about it? Well, the cards feature artworks from all the artists who worked on the game before. As such, it’s a great option if you aren’t sure which Dixit expansion to get. You can start with this one, figure out who your favorite artist is, and for the next expansion you can pick the one that features the most of their work.

As far as the gameplay goes, you can still expect all the good parts of Dixit. Even though the work comes from different artists, the cards can still be represented by the abstract hints, that will leave everybody guessing just which card is yours.

The cards from the Journey expansion are also amazing. The theme journey is represented in various ways. Cards also offer a lot of opportunity for storytelling. Your hint can often be a whole sentence (of course, it has to be abstract enough), and other players won’t have too hard of a time to match with it.

Journey is quite a popular expansion, and you won’t be disappointed with it, as there are many fun prompts to use with these cards.

One expansion that we really can recommend highly enough is called Mirrors. This expansion has (in our opinion) some of the most fun artwork of all Dixit sets and expansions. It’ll surely bring lots of fun to your next Dixit game night, if you decide to go with it.

As you can see, the cards are quite detailed and unique, as such they offer a big boost to your imagination, and you’ll be able to come up with fun hints very quickly. So if you’re looking for more fun playing Dixit, Mirrors won’t disappoint you.

Last, but definitely not least, here’s Dixit Memories. This expansion is also a very popular one, and for a good reason. All the cards are full of color, and most of them are quite cheerful. The art style is also somewhat cartoonish.

The combination of all these factors makes this one of the best Dixit expansions for when you’re playing with younger kids. They are going to love these cards, and they’ll easily find inspiration for their starting phrase.

As you can see, these cards are very colorful, and the more time you’ll spend looking at them, the more details you’ll notice. Such cards are certainly one of our favorite ones, as you can use them many times, and always come up with new ideas for your starting prompts.

Here are some answers to questions you might have about getting a new Dixit expansion. If there’s something that you’d like to know that we didn’t answer, leave a comment below, and we’ll get back to you as fast as possible.

How many Dixit expansions are there?

Are some expansions more difficult than the others?

Not really, as Dixit really isn’t the type of game that becomes harder with any one set of cards. However, some expansions might work better for your playgroup.

Can you play Dixit without the main game?

In general, no. You’d be missing the vote counters, and the game board. However, if you’re a crafty person, you can make those items yourself, without too much trouble.

Which is the best Dixit expansion for kids?

Here’s the good thing – all Dixit expansions are good for kids, as there’s no inappropriate content in them. If we’d have to pick one that the kids will enjoy the most, we’d probably go with Dixit Memories, for the reasons we’ve stated before.

That’s it for the best Dixit expansion. Did we miss one of your favorite ones? Let us know which expansion is your favorite – and why – in the comments below.

If you’re looking for some other board games to try, maybe you’ll enjoy some of the following articles:

Until next time – we wish you and your play group a lot of fun with your new Dixit expansion!