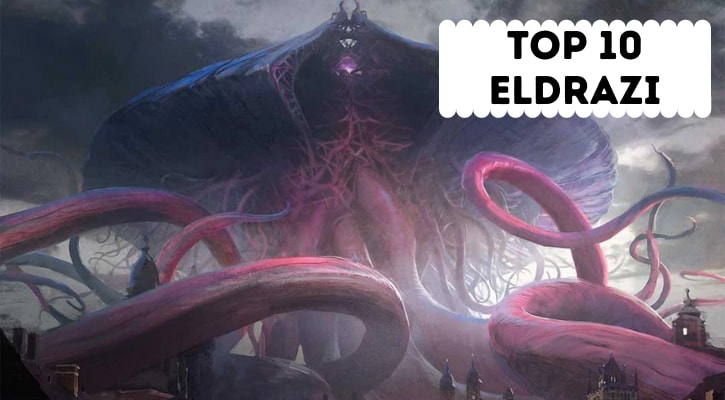 We have explored many different creature tribes in our previous articles. But we have not explored any like this one. Today we’re talking about the best Eldrazi cards in MTG.

This – in addition to the fact that most of them do not have a color identity – makes them one of the most unique creature types in the whole game. They are a perfect mix of lore, artstyle, and game mechanics in their card design.

They are also some of the most feared and iconic creatures out there. You know that once you play one of these creatures you’ll get a scared look on all your opponents faces.

This article will be mainly focusing on best Eldrazi for the format of Commander, where the majority of them are played. Although some of these cards can be easily fitted in other formats where they are legal.

We begin with some cards that deserve some recognition. Not all of these are creatures, but they still deserve to be mentioned with the tribe.

These two enchantments have the same base effect. They both create at the beginning of your upkeep a Eldrazi Spawn or Eldrazi Scion token that can be sacrificed for one mana. The difference is that Awakening cost 3 and From Beyond 4. From Beyond apart from this ability also can be sacrificed for 2 to search for an Eldrazi from your library. This makes this card more dynamic.

The one thing in common between these two distinct cards is that they care about colorless creatures. And most Eldrazi are colorless. Herald of Kozilek is the simpler card of the two. It is a 3 mana 2/4 that reduces the cost of all colorless spells by 1. Direct to the point.

Ugin, on the other hand, is a Planeswalker with the static ability of reducing the cost of colorless spells by 2. The +1 manifests the top card of your library. The -3 destroys any permanent that is one or more colors. So it offers cost reduction, card draw, creature creation, and removal. All in one card, which is pretty great.

These Eldrazi are solid additions to any deck, and deserve some praise for their unique and powerful abilities.

It that Betrays is the most iconic of the three. 12 mana is a lot, but you get 11/11 with Annihilator 2. This plays nicely with its second ability, which lets you put any non-token permanent your opponents sacrifice on the battlefield under your control.

This ability in combination with the fact that a lot of other Eldrazi have Annihilator means that you can potentially steal a lot of permits from your opponents.

Endbringer has the most interesting abilities of the three. All its abilities revolve around the tap mechanic. It can tap:

And it untaps at the beginning of each upkeep. This makes it a really interesting piece with potential to go infinite with other cards.

Deceiver of Form has probably the most impactful effect of the three. In terms of being mana efficient, it is a 8/8 for 7 mana which is pretty efficient. Then, at the beginning of combat on your turn it has the ability to reveal the top card of your library and make the rest of your creature become a copy of it until the end of the turn if you decide to do so.

This means that you can potentially transform all your creatures to provide a killing blow, or provide support to advance your game plan or affect your opponents.

Whenever a player casts a board wipe the outcome is usually that all players need to build up their board states again. This is a way to restart the game in order to deal with a player getting ahead or as a last resort. All is Dust is a board wipe which destroys everything except colorless permanents. This in a Eldrazi deck is basically a board wipe for everyone except the Eldrazi player. It is an excellent card to get an advantage over all other players.

Conduit of Ruin has two extremely useful abilities. The first ability is to tutor for a colorless card with CMC 7 or higher. Which usually has an amazing target in an Eldrazi deck. The second static ability is to reduce the cost of every first creature spell you cast by 2. Which makes it a bit easier to cast the card you tutor for.

Graveyard recursion is always extremely useful. Especially in a deck where creatures are usually the target of removal spells. Artisan of Kozilek provides the best kind of graveyard recursion, which is from the graveyard directly to the battlefield.

If the creature you bring back has an enter the battlefield effect makes this ability even better. In addition, it has Annihilator 2 which is always a useful tool to frustrate your opponents.

Lands entering the battlefield is something that happens often in any game of Magic. This is why having landfall abilities is extremely useful and powerful. Sire of Stagnation does not have landfall but it does benefit from your opponents putting lands into the battlefield.

It doesn’t just make them discard two cards, but it also draws you two cards. Pretty good effects triggered by only lands entering the battlefield.

Not allowing your opponents to play certain cards is the most effective ways of making them hate you. So, if you want to be hated, this card is for you. Aside from jokes, this card restricts your opponents from playing odd costing cards as well as blocking any creature with this CMC.

This limits your opponents from playing half their deck, statistically. It is extremely powerful and potentially game ending. It’s is why this card is one of the most feared and hated Eldrazi.

Moving into the top 5 we find the 5 biggest, most powerful, and well known Eldrazi out there.

Probably the weakest of the 5 legal Legendary Eldrazi, this version of Kozilek has really simple abilities. It draws 4 cards when you cast it. This makes up for its high cost. It has Annihilator 4 which makes him an excellent attacker in combination with the fact that it is a 12/12.

Finally, when it dies it gets shuffled into your library. This makes sure you get to potentially cast him again. Pretty good recurring and impactful card.

The lesser powerful version of Ulamog, this card has similar card design to Kozilek, Butcher of Truth. It has the cast-ability to destroy a permanent target. Ulamog also has Annihilator 4. It is shuffled into its owner’s library whenever it is put into a graveyard. The difference is that Ulamog is indestructible, which gives it the edge over Kozilek.

Speaking of Kozilek, this version of the creature is way better than the previous. It is best known for being one of the best Eldrazi Commanders out there. Its first ability allows you to draw cards until you have seven in your hand. The second ability allows you to counter any spell by discarding cards equal to that spell’s CMC.

This ability plus the first one makes for an excellent combination. In addition, it is a 12/12 for 10 with menace. Which makes this creature have an imposing board presence.

Ulamog, once again, gains the advantage over Kozilek. This version of the creature is much improved. Its first ability is one that triggers when cast. It exiles two permanents. The second is the most destructive. When it attacks it makes the defending player exile the top 20 cards of their library.

This is crazy in 1v1 Formats. And in Commander it’s still extremely impactful. Plus, it is extremely mana efficient to cast it being a 10/10 for 10. If that wasn’t enough, it also is indestructible. So, good luck dealing with it.

We now arrive at the Promised End of the list. This is one of the two versions of Emrakul. This is the only one legal in Commander. This should tell you something about the broken design of this character. This version of it has the most impactful ability any creature can ever have on the game. Taking control of another player’s turn.

This is pretty much game over. Taking control of another player allows you to gain information about the cards they have on hand, makes you mess with your opponents game plan, and overall gives them a massive emotional defeat.

Plus, this creature is a 13/13 with flying trample, and protection from instants. If that wasn’t enough. It cost 1 less for each different card type in your graveyard. Bonkers.

Finally, just a shout-out to the most powerful and iconic Eldrazi there is. It’s so good that it got banned in Commander. What does it do? Just about everything. Emrakul has protection, it gives you an extra turn, it can be countered and it also has anihilator 6, because why not.

Eldrazi are one of the most awe inspiring creatures out there. They have no regard for mana cost, power/toughness, and abilities. They are without a doubt one of, if not THE most, overpowered tribe in the whole game.

As always this list is based solely on my opinion. So, if you agree, disagree, or think I missed any cards feel free to comment below.

Have fun, stay safe, and go for wins with your Eldrazi deck!