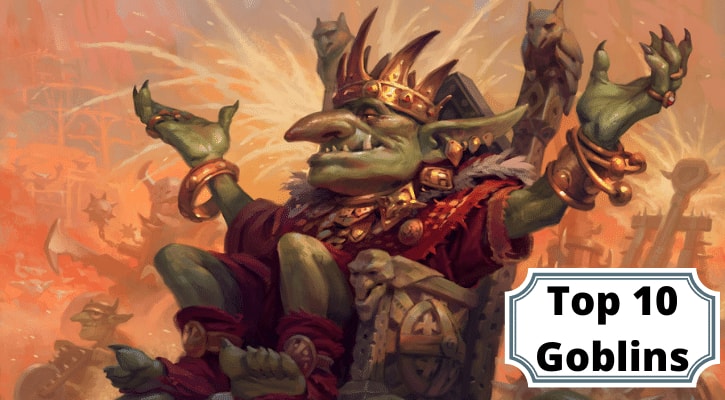 In this article you’ll find the best Goblin tribal cards for Commander and other MTG formats. While I’ll mostly focus on Commander, most of the Goblins on this list will fit in your casual decks as well – some are even Modern playable.

But before we get to them, here’s a quick introduction to set the stage.

In Magic The Gathering, there are plenty of different strategies and themes that you can choose from. Each one has its own strengths and weaknesses, but the variety in options is what makes the gameplay so fun and engaging.

When it comes to Commander the options expand in comparison to other formats, and the meta is not strictly defined – due to its casual nature. However, if one thing is constant throughout most formats, it’s the Aggro archetype. And one of the most recognizable creature types for this strategy are Goblins.

This leads to the creation of this list, which tries to decide what are the best Goblin Tribal cards. The main focus is on their use in the format of Commander, but I will also consider their impact and playability in other formats.

With that said, let’s start with some honorable mentions.

In this section you’ll find some cards that barely missed the top 10 list of best Goblin cards in MTG.

This compilation of spells have the goal of increasing the number of Goblins in the battlefield. Goblins are known for their strength in numbers and these three different cards provide different casting cost options and number of goblins created. Their effect is pretty similar and useful in any Goblin tribal deck.

These other two spells provide the option of converting the amount of Goblins in play into damage. They do it in different ways but the outcome is pretty much the same. They are useful cards that provide that extra damage that might be needed when the game drags on.

The first spell has the simple but effective ability to convert Goblins in play into mana at instant speed and for only one mana, which is pretty useful in plenty of situations.

The enchantment provides a useful method of dealing damage to your opponents every time a creature enters the battlefield under your control. This is devastating in a Goblin tribal deck.

These two Goblins are pretty good utility creatures in this tribe. Legion Warboss provides token creation at the beginning of each attack phase with the added ability of mentoring any creature when it attacks.

Goblin Trashmaster, on the other hand, is pretty useful artifact removal. It provides a way to use extra Goblins to destroy problematic artifacts.

This is one of the most unique creatures in the whole game. It combines lore with game mechanics perfectly. Squee’s place in Magic’s lore is based on the fact that he can never die.

This is represented perfectly in the way in which it can be cast both from your graveyard or from exile. That’s why you can use it for discard, sacrifice, or blocking without worrying about losing a creature. It can be a part of any deck that looks to use creatures in different ways.

This is one of the best overall cards in the terms of efficiency. There was a time when this card saw a ton of play in Standard because of its abilities. The ability of dealing one damage to all enemy creatures as well as opponent can be incredibly powerful. It deals with tokens easily and it provides great aggressive pressure.

These two cards have similar effects. That’s why they are grouped together. There are situations in which one is better than the other, but at the end both of them are good tutors to have in any Goblin deck. The ability to freely search for that one goblin card that you desperately need is useful in any Goblin tribal deck.

This is one of the most simple but useful Goblin cards. It provides a sacrifice outlet for any deck based around that mechanic, as well as providing mana in return. This effect is especially powerful in a Goblin tribal deck. It has the potential to recycle creatures as well as being a part in combos, such as the following one.

These two creatures are pretty decent by themselves providing interesting abilities, but their strength is when they are used together. This is one of the most known combos in the game and it would be unwise to leave them out of your Goblin tribal deck.

With the addition of the previously mentioned Skirk Prospector the three cards provide an infinite combo of damage and mana. And who doesn’t like a finisher combo like this?

This card is mostly effective in Commander. The format is known for the constant and needed use of artifacts, especially in the form of mana rocks. This creature takes advantage of that fact.

It has the ability to temporary steal an artifact whenever it is tapped for mana, which not only disrupts your opponents but it also helps you make use of their artifacts to speed up your own game plan.

The effect this creature provides is really unique. It allows you to put any Goblin from your hand into the battlefield when Lackey deals damage to a player. This is really crazy because you can find ways to sneak this creature in. On top of that it is also a low costing card so that means it can be cast early on, attack, and place a higher costing Goblin into the battlefield as a result. Pretty good ability.

These two creatures have really similar effects. Both of them provide all your Goblins haste, which, in a theme where token creation is common, and the goal is to attack fast, this ability is crazy.

The difference between the two is the fact that one pumps all goblins with +1/+1, and the other makes all goblins cost 1 less mana. Both of these two creatures are essential to any Goblin tribal deck.

This is one of the best answers to one of the most difficult problems about Aggro decks; running out of fuel.

It provides card selection as well as extending your hand. It makes your library a place to get easy resources from. Snoop is even crazier with the fact that it gains all abilities of the Goblin on top of the library. It is also cheap to cast and it has good stats. The art is pretty funny too, which is always a plus.

This card has become one of the most recognizable and played Goblins in the format of Commander, and for a good reason. It is fair to say that it has become a format staple, and it fits perfectly in any deck with red in it.

Additionally, it’s also good in a Goblin tribal deck. It has the ability to ramp you up instantly, which makes its impact game changing. Commander is a format that relies on mana rocks to accelerate the game, plus players often use various enchantments. That’s why you’ll easily get a ton of Treasures.

It might not be as impactful in other formats, but in Commander it is without a doubt the best Goblin card.

If you want to build a Commander Goblin Tribal deck, you might like some of the following Goblins as your dedicated commander.

This is one of the most interesting Commanders for the tribe of Goblins. It is different from others because of its color identity – it contains three colors!

It gives access to more card variety because of it. Not only can you choose Goblin cards in other colors, you can also gain access to utility cards in black and green. This opens up the possibility to build a deck with a different strategy other than aggro.

The fact that its ability encourages you to have a sacrifice strategy in mind is a possibility. Over all, this is a really unique and interesting option for a Goblin tribal deck.

This is one of the craziest Commanders out there because of its insanely powerful ability. It is part of one of the most unique sets out there, called Jumpstart, and it doesn’t disappoint.

Its ability to look at the top 6 cards of your library and put all Goblin cards that cost five or less onto the battlefield is insane. Its mana cost is a bit high but that can always be solved, so it is not that big of a setback.

Its secondary ability to gain +1/+1 for each Goblin you control (whenever it attacks) is quite interesting as well. This provides the possibility to build a Voltron Goblin Tribal deck, which sounds like crazy fun.

This is the most recognizable Goblin Commander out there. Its ability is a simple but powerful one. It is recognized as a really fast and explosive deck in the casual and competitive Commander scene.

Its ability to double up the amount of Goblins in the battlefield is really good. It overwhelms your opponents in an instant and it provides the ability to be super explosive. Without a doubt this is the go-to Commander for Goblin tribal strategies.

In conclusion, the tribal deck strategy is a really fun one to build around. You get the chance to build a deck centered around your favorite creature type or just one that is really powerful. This is the case with Goblins.

Personally, I have a Krenko Goblin Tribal deck, and it is super fun. Goblins are some of the most interesting and fun creature types out there. They are little, aggressive, fast, and scary when they are in a group. This is what makes them one of the most explosive and good tribes out there.

I hope this list has presented you with some options of cards you might not have thought of before. As always, this list is based on my personal opinion, so if you have any suggestions, agreements, or disagreements with the list make sure to comment on them in the comment section.

If you are looking for more Magic and Commander content make sure to check out these other articles:

Have fun, stay safe, and go for wins with your Goblin tribal deck!