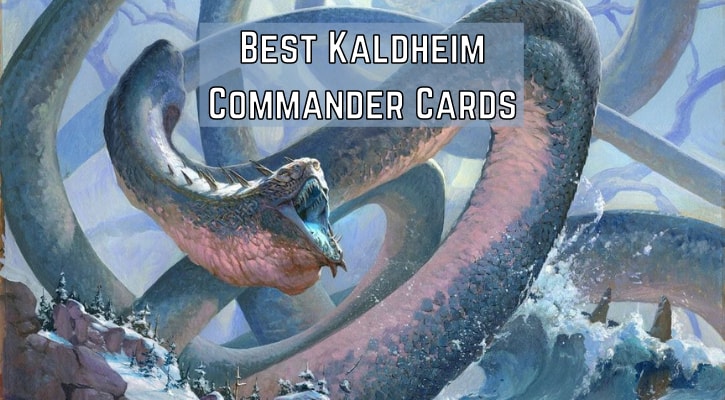 It’s time to get one more Kaldheim article in before Strixhaven spoilers start. This week, let’s talk about what are the best Kaldheim cards for Commander. Kaldheim is an interesting set, because there is so much going on. Foretell and snow and tribes! Oh my! Not only is the quantity of themes high, but their quality is great as well. I have no doubt that dozens of Kaldheim cards will see play in numerous niche Commander decks.

With that being said, there are a few cards that I think will show up quite a bit more often than others. I want to talk about the cards that have generic value in any deck. They don’t need specific conditions to be powerful or useful.

Without further ado, let’s get to judging.

Well, that’s all ten cards. Thanks for reading my article today.

Jokes aside, I am confident that these humble commons are going to see more play in Commander than most of the rares from Kaldheim. Obviously, they will have homes in snow-themed decks. Thanks to their basic land typing, though, they have been cemented in as staples in mana bases of 2+ colors forever.

The reason for this is that they can be fetched with cards like fetch lands, Farseek, Krosan Verge, or anything else that finds lands with basic land types. This makes them more valuable than almost every other dual land cycle ever printed, despite coming into the battlefield tapped. Expect to see these lands in many Commander decks in the future.

At our number four slot we have another land. This one would probably show up higher on the list, except that it’s text box restricts it to five-color decks. However, this card is extremely valuable in those decks. For the low low price of a single land slot, you never have to worry about color fixing ever again. This is one of the trickiest parts of building five-color decks, and The World Tree helps resolve it in a big way. I expect this deck to show up in a large percentage of five-color decks, and that is why it falls in at number four on this list.

The next two are cards that belong in fairly niche strategies. However, those strategies happen to be among the most popular kinds of decks that Commander players build. Maskwood Nexus is a great card to go into tribal decks.

It can often be difficult to find a full suite of creatures from the same tribe to fill out a deck. Many tribal decks end up playing utility creatures that are not tribe members, but synergize with what the deck wants to do. Other tribes don’t even have enough members to fill out a full deck, and need the support of other creatures just to add up to ninety-nine cards. This card is perfect in both of those situations. It makes all of your utility creatures and honorary tribe members finally fit in with the rest of the deck.

And in a pinch, it also makes 2/2 changelings to increase the number of tribe members on the battlefield.

I would not think that this card would be very popular, except that there are so many tribal decks in Commander. For this reason, I’m sure we’ll see a lot of Maskwood Nexuses across from us on the Commander table.

This card is similar to the last card, in that it will only be popular because it goes in a lot of tribal decks that play green. In addition to being a member of every obscure tribe that you could ever dream of, it also helps generate card advantage.

This can be a valuable tool in any tribal deck, but especially ones that don’t already have effective ways to draw cards. Because of this, Realmwalker gets the number two slot on this list.

I know, I know. This is the section for non-commanders. However, I think that Vorinclex will find more homes in the ninety-nine of decks than in command zones. The only other card that plays similarly to him is Doubling Season, which is incredibly popular in Commander. Now that there are multiple cards with this effect, players have multiple options.

However, I expect nearly all decks that already play Doubling Season for the counters synergies to play both from now on.

Each of these commanders are already among the most played from Kaldheim, according to EdhRec. Obviously, they already are quite popular. However, I think that the order that I have put them in below will be the long-term order of popularity for Kaldheim commanders. Let me know in the comments if I’m wrong about this.

I’m not happy about this one. I think that Tergrid can be a very mean commander who is not fun to play against. However, I also think there are a lot of people who like to play The Rack-style discard decks, and Tergrid is probably the best commander for that. Combine this with the fact that she is high-powered enough to find a home in some competitive metas. For these reasons, she is number five on this list.

Koma is a generically powerful Simic card. They protect themselves, make tons of tokens, and are in the right colors to have access to endless powerful staples. Not to mention, a Koma deck won a high-profile episode of Game Knights. A lot of people are talking about Koma, and I’m sure that Koma decks are fun to play. This is a perfect storm for a commander to become popular.

Being versatile is exactly what Orvar is all about. They can be any creature type you want them to be. Furthermore, you can also build an Orvar deck for any power level. You can also do unique things with Orvar that you cannot do with any other commander in the game. They are the perfect commander for new and established players alike. The uniqueness and flexibility of this commander tell me that they will be popular for a long time in the future.

These last two commanders occupy the slots that they do because they are generically powerful commanders in the right colors. Jorn is a Sultai commander that untaps your lands for you. This means that he is in the colors that are considered the most powerful. It also means that you get extra resources on your turn, which is obviously powerful.

Coupled with the fact that Commander players love snow as a Magic theme, and Jorn is the perfect commander. I have no doubt that he will continue to be one of the most popular commanders from Kaldheim for a long time.

#1 Esika, God of the Tree / The Prismatic Bridge

The reason that Esika is number one on this list is very simple: She is a five-color commander. We have seen that even innocuous, uninteresting five-color commanders end up seeing a lot of play. Esika is not one of those. Her back side, The Prismatic Bridge helps you cheat creatures and planeswalkers straight into the battlefield.

Not only is this a classic Commander play style, it also has combo potential. It might get lost in the sea of other five-color commanders, but Esika will be one of the most popular Kaldheim commanders forever.

And that’s it. Let me know if you agree or disagree with my picks for the best Kaldheim cards for Commander. I’d love to hear your thoughts in the comments down below.

And if you want to follow me on Instagram or Twitter, please do. Lastly, check out my new podcast, Gathering: My Thoughts. It is available on Apple Podcasts and Spotify.