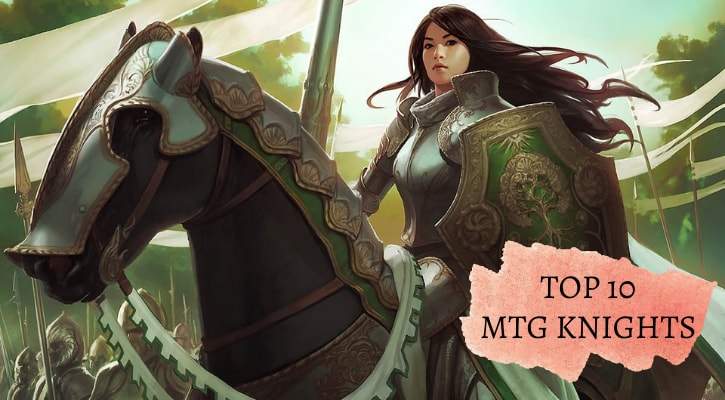 We continue our articles focusing on specific tribes with today’s creature type: Knights. If you’re wondering which are the best MTG Knight cards of all time, you’ve come to the right place.

Knights as a creature type are one of the less focused on tribes out there. What they are better known for is their ability to interact powerfully with Equipment and Auras, and the aggressive play style that results from this ability.

This still does not make them one of the most popular or powerful out there. That does not mean that they are not a fun tribe to explore synergies and build around. They can also be surprisingly explosive and outright destructive in certain situations.

In this article I will give you my opinion on what the best Knights in the entire game are. The list will have in consideration all formats, although with a slight preference on Commander where this tribe is most prevalent.

Let’s start off with some honorable mentions as well as highly synergistic non-creature cards.

Let’s start off with two artifacts that directly work with knights and only knights. There are plenty of equipment artifacts out there with incredible abilities which serve as exceptional additions to any deck not just Knights. But these two artifacts directly benefit and provide benefits for Knight tribal decks.

The Circle of Loyalty

The Circle of Loyalty is an artifact that costs less if you have knights in play, pumps all your creatures, creates a 2/2 Knight whenever you cast a legendary spell, and for four mana, you get a 2/2 Knight. A lot of abilities of only one card. Pretty good, if you ask me.

Sigiled Sword of Valeron, on the other hand, is just a cool and flavorful Equipment. It’s an equipment that pumps the creature equipped with +2/+0 and it turns it into a Knight. It also creates a 2/2 Knight attacking and with vigilance whenever you “swing” with the equipped creature.

History of Benalia is just a simple but effective saga-enchantment. It cost 3 mana. It produces two 2/2 Knights with vigilance in the first two chapters, and it pumps them until the end of the turn with +2/+1 at the third chapter. It’s a great aggressive and cost effective enchantment to have in any deck.

Doom Foretold is not as effective as History of Benalia, but that does not take away its cool factor.  It’s a 4 mana enchantment which forces your opponents and yourself to sacrifice a non-land, non-token permanent at each of the respective upkeeps.

If a player can’t, they discard a card, you draw a card, create a 2/2 Knight, gain 2 life, and sacrifice Doom Foretold. Cool card to add to any deck just for fun.

Haakon, Stromgald Scourge is a really weird card with an extremely confusing name to pronounce. This legendary creature has the bizarre ability of not being able to be cast from anywhere but the graveyard. It also allows you to cast any Knight from your graveyard as long as Haakon is in play.

It’s a 3/3 for three, which is always good mana efficiency. And It has this great ability to open up the possibility to incorporate a graveyard subtheme into a Knight tribal deck. Weird, cool, fun, and… powerful? You tell me.

Puresteel Paladin also brings to the table another subtheme. One more commonly associated with Knights: Equipment. It directly benefits from playing Equipment by drawing you cards whenever this happens.

Additionally, it makes all Equipment cost 0 to equip if you control three or more artifacts. It is a 2/2 for two white. Overall exceptional card that definitely could make the cut for the top 10, but barely misses out.

Tournament Grounds is a simple land that allows you to have access to the three main colors played in Knights decks. The cool thing about this land is the fact that it only produces Mardu colors when casting Knights or Equipment. Very flavorful for a Knight deck.

Righteous Confluence is a really cool card with three really powerful effects. It is mana efficient only costing five mana and doing so much in return. It can exile target enchantment, make you gain 5 life, or put 2/2 Knights into play. You can choose three modes in whichever combination you like which is pretty powerful. Great card for 5 mana, especially in Commander.

Corpse Knight is a fun and simple creature that can fit into plenty of deck themes besides Knights. It is a 2/2 for 2 mana which is extremely efficient. And it has the ability to make all your opponents lose 1 life whenever another creature enters the battlefield under your control. Perfect card for Commander.

This card saw some play when it was part of the Standard format as a reliable sideboard answer. It is still an extremely efficient card even if it does not see that much play outside Commander. It also has an unusual color combination in Selesnya, which is not a Knight tribal color.

But it still is used in plenty of other themed decks thanks to its versatility and options. Buffing itself, destroying problematic enchantments or artifacts, or gaining you life. This card does it all.

This card is another extremely mana efficient creature with an impactful ability. It’s a 2/2 for two mana. It creates a 1/1 Human whenever you cast a Knight. This way it gives you board presence and presents a distraction from other pieces you might have in play. If this card is not dealt quickly, little humans will start piling up.

Inspiring Veteran thrives in simplicity. That is why I love it. It has great art and flavor. Plus, it is mana efficient being a 2/2 for two mana. And it has one of the best tribal abilities of pumping all Knights with +1+1. Saying that this card is played in all decks with Knights is pretty obvious.

Murderous Rider saw a ton of play when it first was introduced in formats such as Standard and Pioneer. It’s use since its rotation out still remains the same. This is due to the fact that it is one of the best two option cards out there. It has the ability to be cast as an instant using it as an “adventure”, which destroys a creature or planeswalker for 3 mana and 2 life.

You can cast it for 3 mana to get the ⅔ creature with lifelink. It doesn’t need to go an adventure first, if there are no good targets for it. So it’s versatile enough to be put in any deck, especially a Knight tribal deck.

This card is another frequently used card in rotating formats. It saw its popularity as aggressive Rakdos decks when they were part of the metagame. This has died down a bit. But this card has moved over to the format of Commander where it sees a bit more play now.

This is due to the fact that it is a mana efficient card with an useful ability. It draws you and your opponents a card for the cost of 1 life, given that you’re probably a more aggressive deck, you’ll get a better benefit from the ability.

When you think of recent Standard format deck archetypes, red aggro is one of the first that comes to mind. And this card is still an essential part to this type of deck. It is also a really good supporting card in formats like Commander.

What makes this card great is its mana cost and ability. It is a 1/1 for 1 red with first strike, haste, the ability to pump another knight with, and make Equipment abilities that target this creature cost 3 less. Once again, all this for just one red mana. Crazy good!

This card is simple. It does not have amazing and distinct abilities. It gives other Knights +1/+1 and it has first strike. It’s not a crazy mana efficient card being a 3 mana 2/2. What makes this card worth it is its supportive value.

Giving indestructible to all Knights is greatly impactful. It makes removal harder. It makes them better attackers and defenders. And it takes attention away from other pieces you have and directs them to it. Great addition to this tribe.

Acclaimed Contender is probably one of the best ones for card selection in a Knight tribal deck. When it enters the battlefield, if you control another Knight, you get to look at the top 5 cards of your library and choose an Equipment, Aura, or another Knight to reveal and put into your hand.

I know putting 5 cards in the #1 spot is kind of cheating. But the fact is that I could not decide between the five which one is the best. I could also not put the 5 of them on the list and took the place of others. That is why I chose to put them on the list this way.

This cycle of cards from the M20 Core Set are reminiscent of the Titan cycle from the M11 and M12 Core Sets. These old cards became famous because of their huge impact in the format of Commander where they totally took over. Especially Primeval Titan which to this day is still on the banned list for this format.

The creation of the new Cavalier cycle brought back some similar designs present on the Titans. Although they did not have the same impact or power level as the cards that came before. Nevertheless, they still provide really interesting abilities and options.

Most importantly they are Knights, which are perfect for this list. All the five Cavaliers have the same casting cost at two colorless and three specific colors which gives them their identity. They all have keyword abilities which match with their color identity. And they also have enter the battlefield and leaving the battlefield effects associated with their color. The only difference between all of them is their power and toughness, which varies in order to balance the cards with their abilities.

This makes them the most impactful and powerful Knights in their respective colors.

Knights are a really cool tribe to play with. The fact that they also incorporate other sub themes such as equipment or auras makes them unique amongst other tribes.

They are also extremely varied because the Knight creature type is usually attached to another more popular one. This makes them easily playable in any deck and in any format.

I hope this list has shown you some Knights you didn’t know about. I also hope you comment down below if you agree or disagree with the inclusions on the list. Especially about the controversial #1 spot.

As always, have fun, stay safe, and go for wins with your Knights!