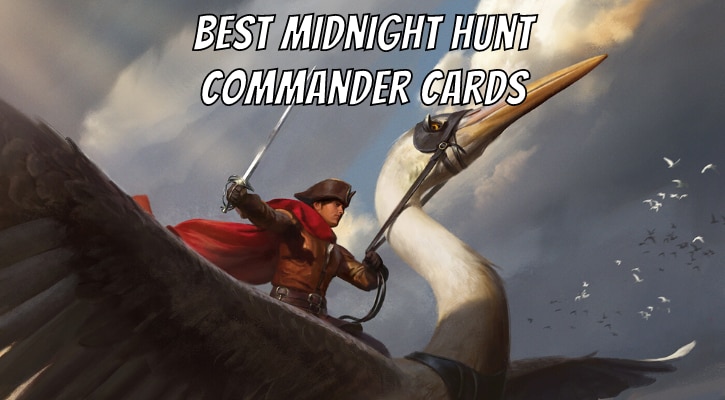 We are knee-deep in Innistrad products. Midnight Hunt released a month or so ago, and now Crimson Vow is upon us. Before we get too far into the next set, let’s talk about which cards from MID are going to the best Midnight Hunt Commander cards.

For this article, as with other similar ones before it, I want to talk about which Legendary Creatures I expect to be most popular, as well as which cards you are most likely to see in the 99. I’ve made two separate top five lists, so let’s just right into them.

These first cards cannot start the game in your Command Zone. They are the cards that are the most likely to get adopted into new and existing Commander decks at the highest rate. Did I miss one? Or do you not agree with me? Please let me know in the comments below.

For those of you who don’t know what the slow lands are, here’s a list:

These lands are okay in Standard and other sixty-card formats, but they are uniquely amazing in Commander. Specifically, the slow, battlecruiser Commander games that so many members of the community love so much.

Let me put it this way. If we assume that the average casual game of Commander lasts for ten turns, and if you don’t miss a land drop in the first two, these lands will come into play untapped for 80% of the game. Compare that to Modern or cEDH, where the average game only lasts four or five turns and these lands only come in untapped 50% of the time.

They don’t have Basic Land types, but other than that, they are among the best lands for Commander that we’ve gotten in a while. I expect to see these all the time in Commander decks.

Next up, we have a card that looks kind of like Courser of Kruphix or Oracle of Mul-Daya. Each of these cards have their own unique strengths, but they all show up in green-based value decks and lands-matter builds. These kinds of decks are so popular right now, that I expect this card to mirror that popularity.

This card is attempting to right a wrong from the original Innistrad. Namely, giving red the best board wipe in Commander. Of course, I’m referring to the similarities between Vanquish the Horde and Blasphemous Act. Both cards essentially destroy all Creatures, and Both of them cost less if a lot of Creatures are on the board. Since they are slightly different,

In cEDH, everything I just said still applies, times ten. The format has tons of fast mana rocks that you could go get. This probably doesn’t go in every cEDH deck, but the ones that will want it will really want it.

And last, but not least, the most coveted card in the whole set. This card is Blood Artist and Black Sun’s Zenith all rolled up in one. It’s seeing play in tons of formats and very expensive already. Hopefully you got one early or have the funds to spend on one, because this card is a home run. It’ll be everywhere at the Commander tables.

And now on to the Commanders. These cards are the ones from the set that I expect most people to want to build around. They are powerful, unique, or just seem really fun. Again, let me know if I missed any or if the ones I included are not actually going to be very highly played.

Technically, Lynde is from the Commander set, and therefore not a part of this conversation. However, because she has such a unique ability, I wanted to mention her here. Besides, if you’re lucky, you can find her in Set Booster packs, so that kind of counts, I guess.

Usually, a card will make it on this list if they fill a whole that previously existed in the Commander metagame. Lynde is exactly that. We’ve been to Innistrad three times now, each time adding more Curses to the card pool. However, we haven’t ever had a dedicated Curses commander until now. Lynde is a great option for that kind of deck, and she’s sure to be popular among Commander players.

The next commander represents a cool new option for a familiar archetype. Rem Karolus has a few things in common with Firesong and Sunspeaker as well as Tajic, Legion’s Edge. Rem is probably the best option for this kind of deck, though.

Since we have started getting more and more interesting commanders in Boros, this one is less impressive than some of the previous ones. However, it’s always nice to have more compelling reasons to play red/white.

Florian is an interesting card for this list. When it was first spoiled, I didn’t think much of it. It seems like a legendary Vampire that wasn’t great for Vampires and just incentivized Aggro or Burn. I thought some folks might like it, and we wouldn’t see it much. However, I was wrong.

Thanks to the Command Zone, people realized that this card has strong synergy with Dragon’s Approach. According to EdhRec.com, one third of Florian decks include Dragon’s Approach. This, combined with the previously stated reasons as well as this card’s budding popularity in cEDH will make it one of the most common commanders from this set.

I’ll admit, this commander might be a bit of a hot take. However, the fact that he is a powerful reanimation tool, has an interesting story, and could even be strong enough for cEDH leads me to believe that this card has a long lifespan among casuals and spikes alike.

Finally, we have the Werewolf commander in the room. This card has been anticipated for over ten years, now, making him long overdue. Many players have already started building their Gruul Werewolves deck, or at least editing the ones they already had.

I doubt that this commander will be the most powerful from this set, but the high demand for him will make him popular for a long time. Plus, we rare get Werewolves on sets other than Innistrad, so Tovolar might be our only hope for a long time.

The Midnight Hour Is Close At Hand

Can’t wait to talk about the top ten Crimson Vow cards next month. If you want some more Innistrad content in the meantime, check out these sweet articles:

Furthermore, if you’d like to try your luck and maybe open some of the cards I talked about, you can buy a Set Booster Box.

And if you would like to get in touch with me, you can find me on Twitter or Instagram, as well as on the Gathering: My Thoughts podcast, available on Apple Podcasts and Spotify.