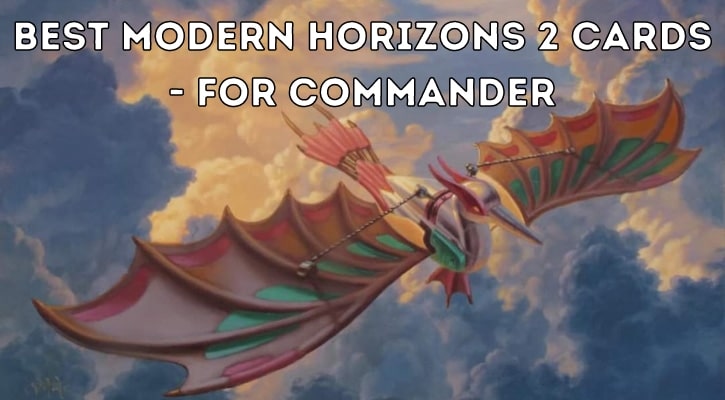 Today I’ll talk about the best Modern Horizons 2 Commander cards. Two years ago, when Wizards of the Coast released Modern Horizons, many people joked about how they should’ve called the set Commander Horizons. Now, we get to see the sequel: Modern Horizons 2. While the second set seems to have a lot more toys for the Modern format, there are still a lot of powerful cards that can be played in Commander.

This top ten list is actually two top five lists. I want to talk about five cards in the 99, as well as five commanders. These are the cards that I expect to have the greatest impact on the game. Also, I expect them to be the cards from this set that see the most play because of their general utility or power level.

Best Cards for the 99 in Modern Horizons 2

First up, let’s take a look at the best Modern Horizons 2 Commander cards for the 99. These cards won’t be your commanders, but can function very well in various builds.

The first card on this list is not very flashy. A colorless 0/2 flier is not going to turn many heads in Commander. However, when you add the ability to tap for a mana of any color, suddenly it becomes more interesting. Non-green decks often use mana rocks to ramp into their game-ending spells. This gets to be one more of those rocks.

You could argue that the game doesn’t need more two-mana rocks. Many people were upset when Wizards printed Arcane Signet because it was an efficient rock that could go in any deck. Ornithopter of Paradise is the exact same thing, except it dies in a board wipe and can carry equipment.

I don’t think the format was desperate for a card like Ornithopter of Paradise. However, I do expect to see it in a lot of Commander games going forward.

This is definitely the card that I am most excited for in this set. Cabal Coffers was one of the most expensive non-reserved list cards in the format. Hundreds or even thousands of black+ decks needed one. Thanks to Modern Horizons 2, players finally have access to this card at a more reasonable price.

This card combos with another card that was recently reprinted: Urborg, Tomb of Yawgmoth. In tandem, these two cards have the potential to generate stupid amounts of mana. I hope to see a lot more Cabal Coffers across from me at the Commander tables in the near future.

#3 Sword of Hearth and Home

Specifically for the Commander format, I think that this might be the first or second best of all the swords. Enter-the-battlefield abilities dominate Commander. Things that incidentally allow you to trigger them multiple times are absurdly powerful. Additionally, the name of the game when playing Commander is almost always ramp, and this sword allows you to do that better than any other equipment. Not to mention, the power/toughness boost and protection are both nice.

The only sword that I think could be better than this one in general is Sword of Feast and Famine. The protection has a similar amount of utility, and untapping your lands in a lot of situations is as good as or better than searching your deck for another basic. I do think that blinking a creature is better than forcing your opponent to discard a card, though.

For this reason, Sword of Hearth and Home gets my vote for best sword in Commander and of of the best Modern Horizons 2 Commander cards.

This card is the latest in a recent trend to try to power up white. Many have compared this card to Rhystic Study, and for good reason. If Esper Sentinel is able to come down in one of the first few turns, it will likely draw you enough cards to keep up with or exceed the card advantage accrued by the other players.

Many players want to get their hands on this card. It’s price tag already reflects this fact. If you need some cheaper ideas for generating card advantage in white, check out my article on why white is not that bad in Commander.

For those who don’t know what the fetch lands are, here is a list of them:

These have previously been some of the most expensive cards in the game because of how powerful they can be. Paired with dual lands that have basic land types, they make sure you always have the right colors to play your spells.

Even though these lands are a reprint, they are without a doubt the most important Commander cards in all of Modern Horizons 2. Buy them while they are cheap.

First up under the commanders’ section we have Chatterfang. This commander benefits quite a bit from being both novel and a meme. All other legendary squirrels either have a silver border (Acornelia, Fashionable Filcher) or are mono-green (Toski, Bearer of Secrets). Squirrel fans everywhere only have one option if they want to play a black/green tribal squirrels deck: Chatterfang, Squirrel General.

In addition to being one of a kind, Chatterfang can also be a very powerful card. The card’s ability is similar to that of Parallel Lives. Instead of getting double copies of every token, you get a squirrel for every token. While obviously not as strong, this ability can easily make a vast army of squirrels for your opponent to deal with.

Chatterfang’s second ability is also a relevant one. A single black mana lets you sacrifice any number of things. It’s the next best thing to a free sac outlet, and it gets to sit in your Command Zone. I think that if you don’t care about the tribal squirrel memes, but are looking for a black/green aristocrats commander, Chatterfang could be one of the best options.

Next up on the list is a commander that might not be super popular right now, but I think people will come around to him eventually. Carth the Lion is great for two reasons: first, he is a green. Superfriends commanders don’t always have to be green, but there are a couple of very important green cards for decks that utilize planeswalkers. Specifically, Doubling Season takes your deck from zero to sixty, if you can even get one planeswalker-worth of value from it.

Second, his abilities mitigate two major weaknesses that planeswalker decks sometimes encounter. If your opponents are able to stay on top of killing your planeswalkers on the board, each one can replace itself by looking at the tp seven cards of your library and giving you another card. This helps make sure you don’t run out of gas as easily.

Then, his last ability speeds up the process of getting your Walkers to ultimate range. This can sometimes take multiple turn cycles to accomplish for certain cards, but with Carth you can do it much faster.

This commander is the token Simic value commander from the set. On it’s face, Lonis seems like a neat Clue-themed commander. Delving just a little bit deeper shows that they are actually another combo-tastic blue/green deck.

Breaking this commander is as easy as generating infinite mana. Such loops easily lead to infinite enters the battlefield triggers, which can easily lead to stealing every card in your opponents’ decks. There are probably a good number of hoops to jump through here, but we all know that Simic cards are excellent jumpers.

Garth gets to be number two on this list for mostly one reason: he is a five color commander. Historically, commanders that give you access to any card in the history of the game are often more popular by virtue of that alone. I expect Garth to be no exception.

In addition to being five colors, Garth also lets players cast nostalgic Alpha cards, not the least of which being Black Lotus. Very few players have ever even cast a Black Lotus thanks to it’s restrictive price and the fact that it is banned in almost every format including Commander. However, now that Garth let’s you make lotus copies, anyone can have a Black Lotus.

Unfortunately, I don’t see a lot of creative directions to go with Garth other than pure nostalgia and combo. Players could make Garth, One-Eye decks out of only Alpha cards to fit with Garth’s theme. Other than that, they could use Deadeye Navigator and a Haste enabler to win on the spot. In my eyes, these are the only two options with Garth that aren’t just a random pile of cards.

I expect the novelty of casting Black Lotuses and going infinite will wear off pretty quickly for Garth. In the meantime, though, I expect him to be a very popular commander from this set.

Finally, we have Ragavan. This Legendary Creature is the next in a long line of red commanders that generate ramp and card advantage in a typical red way. Treasures are technically temporary mana sources, and the card advantage only lasts until the end of the turn. These effects can only be triggered by dealing combat damage, but the fact that Ragavan only costs a single red mana makes connecting with an opponent’s life total more than possible.

Additionally, Ragavan’s ability lets you steal cards from your opponents. This is a pretty fun red strategy and doesn’t go infinite as easily as Lonis does.

The biggest thing holding Ragavan back is that right now there is high demand for him in multiple different formats. This high demand has led to Ragavan being pretty expensive, which can restrict some players from building the deck. However, despite this I think that over time players will love Ragavan and build many red monke decks.

Eye On the Horizon

If you want to try your luck and open some of the best Modern Horizons 2 Commander cards, you can purchase a Set booster box on Amazon.

Let me know what you think of my lists. What are you playing from Modern Horizons 2? Are there better cards that I missed? You can let me know in the comments of this article or on Instagram or Twitter. You can also find me on my podcast Gathering: My Thoughts. And if you want more articles about Modern Horizons, try these: