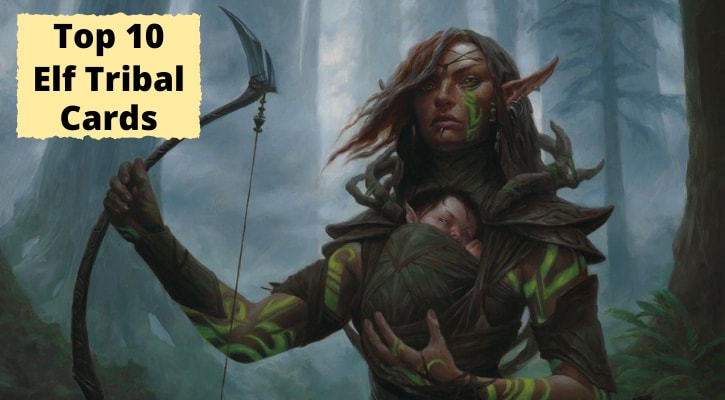 The moment the Kaldheim spoilers started, I became excited for the tribal cards. Elves and Angels were my main focus, with tons of amazing support and beautiful artwork. For now I’m focusing on Elves since I’m excited for Radha to finally have fellow Elves with six packs, and there’s even a prebuilt Elf Commander deck!

I’m going to focus on best Elf tribal cards for the 99, but I’ll finish with three Legendaries that can either be in the 99 or be your Commander. I’m also trying to avoid Kaldheim Elves and the most obvious staples such as Elvish Archdruid since you’ve likely already read about them.

We’re starting off with a risky card, as allowing your opponents to play low CMC creatures for free can really hurt you. Since most Elves cost 3 mana or less, you’re hoping this will net you more value. Combined with cards that draw you cards per creature such as Beast Whisperer, this can lead to some early game wins.

#9 Aid from the Cowl

Such an amazing card if you run mostly permanents. It helps you recover lost Elves and also works for lands that are sacrificed. Aid from the Cowl only works on your End Step so it won’t trigger if your Elves die when your opponent attacks you. It also only triggers once per turn so it can be a slower card, but useful for longer games.

Another risky card to use since it helps your opponents too. Heartwood Storyteller is going to get your opponents to draw cards, but if you have mostly creatures in your deck, you will draw more cards. Personally I think they’re worth the risk, especially since you can get them out earlier than most green draw cards.

Perfect for pumping up your Commander to attack and leaving your other Elves to defend. Alpha Status works as well but will go away if your Commander dies. Both are amazing with Marwyn.

Both Kozilek, Butcher of Truth and Kozilek, the Great Distortion are perfect for Elves. A large creature to dump mana into plus card draw is a great way to help you survive longer games. I recommend not using most of the cards you draw and save them in case your opponents have a board wipe to get rid of your Elves and Kozilek.

Magic the Gathering has tons of Hydras. While, they aren’t the most obvious elf tribal cards, most of them are amazing with Elves since Hydras get bigger if you have more mana. Thankfully mana isn’t an issue with Elves. Here are some of my favorites:

One of the most powerful Elves in recent sets, Allosaurus Shepherd protects against counters and buffs all of your elves. They’re difficult to find but if you’ll lucky enough to get one it’s perfect for Elves, and certainly one of the best elf tribal cards out there,

#3 Nath of the Gilt-Leaf

People always forget about Nath in Elf decks. He is slow, with 5 CMC and generating a token per turn, but if you add cards that make your opponents discard then he can built an army very quickly. Also think of every card discarded as less cards to be used against you.

I recommend using Enchantments to make your opponents discard cards since they’ll last longer in Commander. Bottomless Pit is great but also makes you discard. You can also use cards like:

Mind Slash is terrifying since you can just sacrifice the tokens that Nith generates to make your opponents discard more.

One of the most well-known Token Commanders. You can get him out turn 1 for some quick Commander damage, and start generating tokens as your Mana Base grows. It’s really easy to start cranking out Elf Tokens early, especially with Elvish Archdruid to generate mana.

He also doubles your tokens no matter the creature type, so if you have Angel or Beast tokens they’ll be doubled too. So you could build an Elf deck with strong token support. Divine Visitation is powerful but will also greatly decrease the number of Elves you’ll create. Emeria’s Call will not only create Angel Tokens, but also protect your Elves.

Entreat the Angels and Decree of Justice are good to just dump large amounts of mana into creating Angels or Soldiers. Devout Invocation is good if you have tons of Elf tokens to tap.

My fiancé runs Marwyn and she is the most terrifying Elf Commander I’ve ever seen. She can generate tons of mana or deal tons of Commander damage.

Give her Trample and you can decimate your opponents easily. I personally recommend Equipment such as Chariot of Victory and Horned Helm for Trample. You can also use Loxodon Warhammer to gain life, or Dragon Throne of Tarkir to pump up all of your other elves. Given how quickly she gains power, Dragon Throne can decimate multiple opponents if you have enough Elf Tokens.

In this section, I’ll explore which Elf Commanders are best for various color combinations.

Most Elf decks are going to be monogreen, but why not splash another color? It is totally possible to run a Commander that’s White-Green but have mostly Green. Hell, you can run the deck with only Green spells but with a Green-Blue Commander.

As long as you have Islands to tutor out and Elves that generate multiple colors, you’re good. But which color combos are best for you?

Rhys the Redeemed and Karametra, God of Harvests are great Commanders for these colors. Karametra is great for making each Elf cast give you a land. With extra lands you’ll recover faster from board-wipes.

White gives you access to Enchantments that buff your Elves, such as:

You also have Aura Shards to control the battlefield. Cathars’ Crusade is also an amazing way to make sure your Elves are powerful enough to take out players that have larger blockers.

I mentioned Nath and discarding cards, but with Black you can also sacrifice tokens and use graveyard recursion to protect you against board wipes. Belbe, Corrupted Observer is good to generate mana early. Meren of Clan Nel Toth is not an Elf but will help resurrect your Elves.

Kaldheim and Commander Legends has also made tons of amazing cards for these colors and Elves. The Partner Commanders are also a good idea, especially if you want to mix strategies. Your options are:

Gilanra is only good if you have high cost cards, so not the best option for most Elf decks.

Black also has several cards that kill non-Elves for one sided board wipes, such as Eyeblight Massacre, Crippling Fear, and Witch’s Vengeance. This is amazing for destroying potential blockers before you attack or to protect yourself from other token decks.

Surprisingly powerful colors for Elves that is never used in any of my play groups. You have Edric, Spymaster of Trest and Ezuri, Claw of Progress as powerful Legendary Elves.

I would personally go with Kinnan, Bonder Prodigy as my Green-Blue Commander. He allows all of your Elves to tap for more mana, and you can dump mana into him to bring out non-Human creatures. If you have mostly Elves this is very easy. The one negative for Kinnan is that he’s a well-known competitive Commander, meaning he will make you a target in casual groups.

Great colors if you want to focus on attacking more. Grand Warlord Radha and Radha, Heart of Keld are amazing Commanders for this strategy. It is nice using all of your Elf mana on spells like Fireball and Red Sun’s Zenith to deal tons of direct damage.

Elves have a large variety of strategies to help you win. What Commanders and colors are you thinking of using? Which are your favorite elf tribal cards for Commander? Please tell us your ideas in the comments below!

Here are some more articles that you might enjoy: