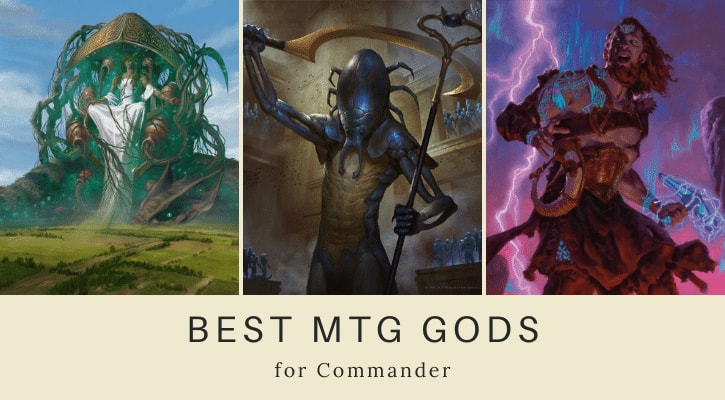 Are you looking for best MTG Gods? If so, you’ve come to the right place, as today I’ll talk about the best creatures with the God sub-type. While, the rankings are mostly based on Commander, you can also find great cards for your casual 60-card decks.

Before we start, let’s talk about the design of the MTG gods.

In Magic the Gathering there are plenty of aspects that go into making any kind of card. There are the mechanical aspects of it like the mana cost, card type, color identity, etc. But one of the most interesting aspects to any card is its place in the lore of the game.

A card has to fit into the theme of the set it’s printed in. The art, the flavor text, and the overall design of a card has to be carefully thought of before making its way into the printing machine.

With the upcoming release of the new set Kaldheim, based on Scandinavian mythology, MTG is presenting its take on this incredibly interesting and recognizable lore. It seems like a lot of content is coming out in different mediums about Vikings.

This new set brings with it new mechanics as well as returning ones. You can find all the information about this upcoming set on our Kaldheim spoiler page.

With that in mind, I present you with a list of my take of the best God creatures applicable for the format of Commander.

Although God creatures are one of the most powerful in their respective sets some of them are underwhelming compared to others in the same creature type.

An example of this underwhelming power level are the base five MTG Gods from the Amonkhet set. It is true that some of them saw play and were quite good in formats such as Standard. However, their transition into Commander wasn’t that successful

Their eventual return as Zombie Gods in War of the Spark was a welcome one in terms of lore, but their impact in the format was not at the same level. They were indeed better than their original card in Amonkhet, but are still not good enough compared to the others.

Two of the better Gods in the War of the Spark set are:

Moving on into the more powerful set of cards – the original Theros block, where MTG Gods were introduced. There were 15 God cards in that set . one for each color and two-color combination.

Many of them made their way into the format of Commander. Although this is the case, not all of the cards made the final cut.

Two cards that were unfortunately left out of the list are:

On the return to Theros, called Theros Beyond Death, these classic Gods were brought back. They got different, arguably toned down, versions of themselves. They gained gain different abilities, but retained the same flavor.

Although it was cool to see them back, they did not bring the same punch they did the first time around.

Two of the better Gods in this set, which deserve a mention are:

This brings us to the latest set that brings back this creature type; Kaldheim. Because this set is new, I have decided not to judge these cards equally to other already established God creatures. They need more time to develop and find their place in the format.

This is why I have decided not to score them too high on the list and have chosen just two that I believe have potential. They might be better than their ranking might suggest, but I personally do not know at the moment. We’ll just have to wait and see.

Some of the God cards that deserve a shout out in this set are:

It has the really cool mechanic to be played as a really powerful enchantment as well. The ability to gain access to all colors in the game is also really cool, because it opens up the possibilities to build any kind of deck with the legendary mechanic.

One such decks idea I have seen floating around is a God tribal deck, which sounds super fun and powerful as well as fitting with this list.

Both this and the previous spot on the list can be interchangeable. Toralf is another exciting new card coming to the format. It’s clearly based on the Scandinavian god Thor as well as his hammer companion Mjolnir.

This creature in contrast with Esika brings a different take on aggro strategies. Toralf has a really unique and never before seen ability. It converts the extra damage into more damage, which is really interesting. It definitely has the potential to be very good in the format.

Making our way to Greek mythology and Magic’s take on the character of Zeus. This card is the second iteration of this character is Magic’s lore. It is certainly better than the first iteration improving on the very popular Commander theme – life gain.

It is fair to say that this creature is one of the most fun mono white commanders out there. And who can forget about its ability to pair up with Walking Ballista for an infinite damage combo.

Staying in theme with Greek inspired gods. Kruphix first appeared in Journey into Nyx. It brings to the lore a really interesting character; that being of a deity present in the story before the other gods and independent of the belief of the population of Theros.

It without a doubt is one of the most mysterious and interesting characters from this set. It’d be really interesting to see him explore further in other future sets that return to Theros once again.

The lore is not the only thing cool about this card. Mechanically it is really good and flexible. There are plenty of ways a deck around him can be done because of its ability to retain mana through phases converting it into colorless. This opens up the door to strategies based around big mana plays and shenanigans.

The first theme that comes to mind due to its ability and colors is blue-green x, which looks to ramp and cast big costing creatures. A theme that teared up the format of standard a few months ago, and that is really powerful in Commander.

It is fair to say that the original Theros blocks had some really good and flavourful gods. Athreos is another example of this great card design. This is Magic’s take on the mythical deities present on the Greek idea of the underworld. It is based on Greek-Roman gods such as Janus, which looked over all the souls, which made their way into the underworld.

This same story and background is translated into the card mechanics of Athreos. Its ability to bring back any creature that dies to your hand is pretty good and rarely seen. Its colors and ability lend themselves perfectly to an Aristocrats theme based around sacrifice and value.

As the colors and the name of this card suggests, it is interested in ramp and creatures. Really flavorful and smart designs are present in this card. Its colors lend itself for token strategies as well as overall ramp.

I would say that the second strategy when building this deck is the way to go because of the ability to translate casting creatures into fetching lands. This is a really unique ability as well as a really impactful one to the game. Getting lands into play, just by playing creatures is incredibly powerful.

One of the best color combinations for aggro strategies in Commander is Gruul. This god with this color combination does not disappoint. In terms of lore, Xenagos is a planeswalker who finds himself in Theros and with the acquired devotion of the inhabitants of Theros becomes a god. This is not quite apparent smoothly in the card design, but that doesn’t mean it isn’t good.

Quite the opposite, this creature is one of the best MTG Gods. It has the ability to give +X/+X to any creature equal to that creature’s power. This is extremely powerful in certain situations and with certain creatures.

A deck built around him screams “Big Boi Aggro”, as I like to call it – because of its explosive capability and its incredible pay off if you manage to activate its ability onto a big creature.

Dimir is one of the most varied combination colors in the game of Magic at the moment. However, back in the day when the Theros block was printed, the color combination was mostly known for being based around graveyard interactions.

Least to say, the God assigned to this color combination brings to the table a really interesting way to tackle mill strategies. All creatures can now mill cards (from any player’s library) equal to their toughness.

You can either build this deck to win the game by:

Taking a departure from Greek to Egyptian mythology – The Locust God was an addition from the set Hour of Devastation. The whole theme of this set is one based on Egyptian mythology with the spice of the involvement of the big villain of the story, at the time, Nicol Bolas.

In this set, three new Gods created by Bolas are introduced with the sole purpose of defeating the other five based gods of Amonkhet. This brings “the Hour of Devastation” to the plane, where all living beings are turned into the Eternals (Zombies).

The Locust God brings some biblical elements as well, with its association with the locust plague. Mechanically this card showcases this by producing a 1/1 Insect token, whenever you draw a card. This means this deck is based around the draw card mechanic.

It has become one of the most popular Commanders because of its ability to capitalize from the card draw mechanic, as well as being super explosive and overwhelming.

This creature is one of the most recognizable from the Amonkhet block because of its impact on many formats. It was really powerful in the Standard competitive scene, and it has made its way into becoming a Commander staple.

This card in company of the Locust God and The Scorpion God has the characteristic of being really hard to deal with. That’s because of the ability to return to its owner’s hand, when they die. This, alongside the first ability – to bring back any creature from a graveyard as a 4/4 – opens up the opportunity to build this deck in any shape and form.

It is also very versatile because it can bring back a creature from any graveyard meaning you can take the best creatures from your opponents graveyards. It also presents the opportunity for self-mill strategies, as well as recursion and sacrifice.

The most obvious strategy is that of Zombies, which is one of my personal favorites. In general, there is no doubt this is the best MTG God creature for the moment.

God creatures are some of the most powerful and flavorful in Magic. The return of this creature with Kaldheim, certainly increases the hype levels around this set.

In general, the MTG Gods that will be introduced in this new set look to be really good. We will have to wait and see what their actual impact on the game really is.

In the meantime, whilst we wait for the set to be released, this was my take on the Top 10 best MTG Gods for Commander. I hope you have enjoyed it. As always if you agree, disagree, or have any suggestion for this list feel free to comment below.

Have fun, stay safe, and go for wins with your favorite Gods.