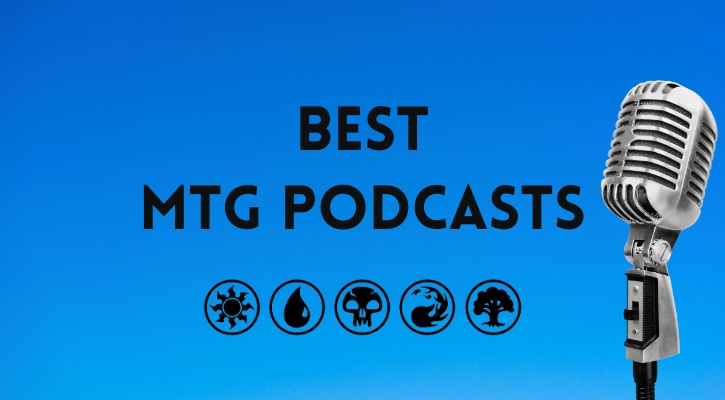 Are you looking for some best MTG podcasts? That’s great, as today what we’ll talk about just that. We picked very best MTG podcasts that will let you improve your win rate, learn more about the game and have some fun.

With such MTG podcasts way, you won’t get bored on long drives any more. Besides that, you’ll also be able to learn more by listening to some of the best minds Magic has to offer.

Great podcast for quickly levelling up your limited game. Focused mostly on drafting, but also make occasional episodes about sealed. Hosted by commentator and limited enthusiast Marshall Sutcliffe and one of all-time greats LSV – Luis Scott-Vargas.

If you haven’t heard about LSV yet, he is a Hall of Famer with a whooping 10 Pro Tour Top8. A lot of what they talk about can also be applied to constructed.

Here’s what you can expect from Limited Resources:

Limited Resources are a great listen for both beginners and more experienced players. Lords of Limited however focus on the most competitive players. Players who want to get every edge they can.

They mostly focus on playing drafts on MTGO, but their advice will come in handy in Arena as well as in paper drafts.

They focus on every detail of a draft format. Want to know average power and toughness of creatures in upcoming set? Want to know how many different removal spells there are in red? Just listen to their preparation show. They do one for each new set. With information like this, you’ll win rate will undoubtedly improve.

Platinum Pro and Pro Tour champion Gerry Thompson is joined every week by Bryan Gottlieb to discuss everything about constructed Magic, focusing mostly on Standard and Modern. They also cover the newest MTG format – Pioneer.

They regularly talk about which deck they’d play for the upcoming weekend. This is really helpful given the rapidly changing metagames in Standard. Even is you don’t decide to pick that deck, you’ll know what you’ll have to be prepared for.

If you want to be ready for the next constructed tournament, you shouldn’t miss this one.

The Innovator Patrick Chapin and one of the best MTG theorists Michel Flores will expand the way how you think about constructed Magic the Gathering. They find awesome uses for freshly spoiled Magic cards and have unwavering optimism for new builds.

The podcast is one of the most relaxed MTG podcasts. Friendly banter between Patrick and Mike is fun to listen to. Occasionally they truly provide you with some eye-opening MTG knowledge. Since they’re both old school Magic players, you’ll also learn some Magic’s history. So if that’s something you’re into, you should certainly give Top Level Podcast a listen.

In contrast to other MTG podcasts we mentioned so far, this one won’t make you a better Magic player. You will however learn that Merfolks are bad in Modern. On a more serious note, this is one of the best podcasts about MTG Finance you can find.

They always joke around and discuss random stuff from travel stories to movies that were released twenty years ago. Around 20-40% of the podcast is still somewhat focused on MTG, and there are some very good tips that will make playing Magic more budget friendly.

You should note that their goal isn’t to make you rich with Magic cards trading. It’s rather to save you money while playing the decks you want. An example of that is our favorite segment of the podcast – Pick of the Week. Each cast member recommends a card that’s on about to rise in price. So if you need one, you can get it, before the price spike.

We should also warn you that some of their jokes are probably better for more mature audiences.

Mark Rosewater a.k.a. Maro is the Head Designer for Magic the Gathering. Besides making Magic, he’s also making a podcast. He talks about MTG a lot – mostly from a design point of view. Since he’s pretty busy, he makes the podcast on his commute to work. That’s how it gets its name.

Did you ever wonder:

If so, this is a great podcast for you. You will also learn a lot of stuff which can be applicable to general game design. However, if you’re just looking to get better at Magic, this probably isn’t the best podcast for you.

For all the lovers of the Commander format, this is the best MTG podcast for you. There are plenty of different topics such as:

As you can see – Jimmy and Josh definitely have something for every Commander fan.

If you’re looking for a fresher MTG podcast, this is an amazing pick for you. Spencer is also a writer here at Card Game Base. You might’ve seen some of his articles, his upgrade guides for Commander precons are always quite popular.

On his podcast, he talks about whatever is on his mind related to Magic the Gathering, but mostly focuses on Commander. You’ll surely enjoy some of his hot takes, set reviews and deck techs, if you’re a Commander enthusiast.

Hopefully you found your new favorite MTG podcast today. Maybe you think we missed a great one? Don’t be afraid to tell us in the comments below.

If you want to improve your game even more, check out those articles:

Until next time, have a great day, and may you always draw the perfect seven.